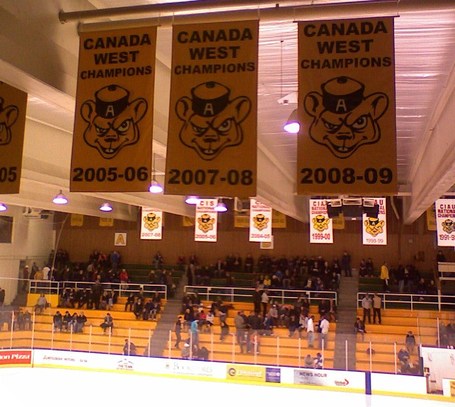 Remember that Edmonton Oilers dynasty that lasted for a decade or so? Just a short-lived little thing, compared to  another hockey dynasty in this city, one that has lasted for the better part of a century with little sign of abating. I am of course talking about the University of Alberta Golden Bears.

I've been following the Bears more or less continuously since 1975. I'm not an every game diehard like I was during my season ticket days with the Oilers, but I've probably attended a hundred or so Bears games over the years. I try to get to at least one league or playoff  game every season in addition to the annual preseason affair against the Oiler rookies. Love the brand of hockey played at the university level, which has always delivered great value for money. It has also delivered a large percentage of victories for the home side.

So as a matter of course I went down to Clare Drake Arena last night to take in Game One of the CIS Canada West final. Hey, it's not every year one gets an opportunity to see the conference final ... wait a minute, yes it is. Or very nearly so.

I've attended all six CIAU cum CIS national championships that have been held in this city over the past 35 years, going with my dad and my brother in 1977, with my son in 2005 and '06. I'm less sure how many Canada West finals I've attended over the years, but likely more than twenty different series, including both games several years and all three in a couple more. The hosts get the entire series in their building, so finishing first overall in the regular season is a huge advantage. The Bears have managed to do this many more times than not over the years under a powerhouse program that has continued to dominate under coaches Clare Drake, Billy Moores, Rob Daum and now Eric Thurston.

The former Varsity Arena was renamed to honour Coach Drake a couple of decades back but otherwise has changed but little over the years. It's an old-fashioned barn somewhat reminiscent of the old Renfrew/John Ducey Park (baseball) or Clarke Stadium (football): hard bleachers, no frills, but a great place to watch a game from right on top of the action. The history of the old barn is literally hanging from the rafters in the form of 75 (!) championship banners. 60 of these belong to the Bears, including 47 Canada West championships and 13 national crowns. The rest belong to the Pandas, as the women's program has been if anything even more dominant in its briefer history, with 9 Canada West and 6 national titles. The oldest banner (back wall, far left of Section A in the above cell-phone photo) dates back to 1933-34; the newest from 2008-09. (The one the Pandas won last week hasn't been raised yet!) It's got to be more than a little intimidating for visiting teams to come into the Bears' den. That is the task faced by the Manitoba Bisons this weekend ... 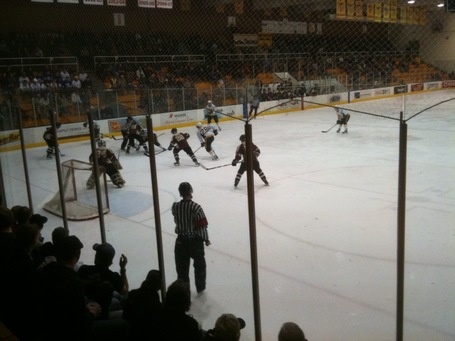 After paying my reasonable $16 adult admission, I assumed my favourite seat in the southwest corner where one is always assured plenty of action. The Bears attack that end twice, and for as long as I have known them have played a strong two-man forecheck which always seems to include a lot of cycling the puck in the LW corner. No passive, "neutral-zone crap" hockey at Clare Drake; it's aggressive, attacking, exciting hockey always.

I was about 15 minutes late for the 7:30 start and nor surprisingly the game was already 10 minutes old. These guys don't jack around getting started, and they don't wait around for TV timeouts either. What was surprising was that the Bisons had scored first, and soon after I arrived they scored a second on a beautifully executed powerplay. From there the Bears began to really ramp up the pressure, swarming the Manitoba end in waves and forcing a series of penalties including a couple of 5-on-3s. Time and again it seemed a scoring play was imminent, but Bisons' goalie Steve Christie was absolutely on fire, making a succession of excellent saves, sometimes 2 or 3 in sequence. The Bison defenders were also making it tough, battling hard for position, deflecting passes, blocking a number of shots. The bounces weren't the Bears' friends on this night, as several pucks skipped just past the post or hopped over the stick of a would-be scorer. At period's end the score held at 2-0 Bisons despite an 18-4 edge for the Bears on the shot clock.

I caught up on current affairs and some more Canada West history during the intermission as I perused the game sheet. I learned that while the Bears were once again dispatching the Calgary Dinosaurs last weekend, the Bisons had upset the Bears' fierce rivals from the University of Saskatchewan in a three-game upset in Saskatoon. While the Bears-Bisons rivalry is not quite as strong, it is hardly short of history. According to the program: "This weekend's games are the 210th and 211th (and possibly 212th) between the Golden Bears and Bisons since the series began during the 1913-14 season with a 6-4 Manitoba win in Winnipeg on Christmas Day, 1913. Alberta leads the all-time series with a record of 149-51-9 (.734), and the Golden Bears have outscored the Bisons 1,062-656."

For all the star players and history on their side, this wasn't to be the Bears night. They continued to ramp up the pressure in the second period, running the shot clock all the way to 29-4 at one point, even though the scoreboard resolutely held at 0-2. Christie was nothing short of phenomenal. Finally, on the 30th shot the Bears broke through, and at 2-1 it seemed that surely the comeback was on. Instead, the Bisons struck for an unlikely third goal on just their 7th shot to restore the two-goal lead at the intermission, then got a freebie on a really ugly rebound early in the third to run the score to 4-1. That scoreline held to the end as Christie ended the night with 46 saves, compared to just 17 for the unfortunate Travis Yonkman in the Bear's crease. This was a game decided by the goaltending.

Still, the Bisons deserve credit for their resolute defensive play and for their execution on their relatively few offensive chances. The win was almost as ugly as their brown and beige roads uniforms, but it wasn't a complete fluke by any means. They did what a visitor has to do in Clare Drake Arena, which first and foremost is a matter of survival.

In such an "intimate" environment the fans can be quite a factor. The building wasn't packed on this night, maybe 1500 to 1800 or so fans in an arena that has crammed in as many as 3300 sardines. Among them in my section was a loud and boisterous group of about 30 guys right behind the visitors' goal who were giving Christie a hard time at every opportunity. Any other Bison and the referee were also frequent targets. These guys had all the inhibitions of male university students, which is to say, not many. Every last one of them seemingly had a live beer in at least one hand throughout which added liquid fuel to the fire. They were mostly harmless, just having a good time in a college days sort of way. They didn't need a big screen and a talking head telling them when to make noise, it was just a continuous barrage, and some of the invective was pretty original. Christie had the last laugh though.

Did I mention the hitting? The puck battles were ferocious all night, with tons of body contact. I saw 5 or 6 of the best hits I've seen anywhere all season, including one beauty where the Bears defenceman squeezed out a Bison winger along the boards, got his shoulder into him and lifted the guy right up and over. Buddy had a hang time of about two seconds before he came crashing down to ice.

The other highlight of the game was being joined by my son and his pal about halfway through. Kevin and I have attended many Bears games together through the years, starting when he was a wee guy and continuing all through his minor hockey days, but not so often since he finished up 5 years ago. Some of those years we attended a Bears game  every weekend home series throughout the season, so it was a fairly regular thing. Right from when he was a real little guy, my son befriended some of the rink rats at the arena, "the Zamboni guys" as he called them. More often than not it seemed the boy came home with a puck or two.

And so it was last night. Some of those rink rats are lifers, and even though Kevin hadn't seen them for a few years he went down to talk to one fellow he has known for years and wouldn't you know but he emerged with a couple of game-used pucks, still cold and wet from third period action. Would have been nicer if said pucks commemorated a Win, but even the Alberta Golden Bears can't win 'em all. 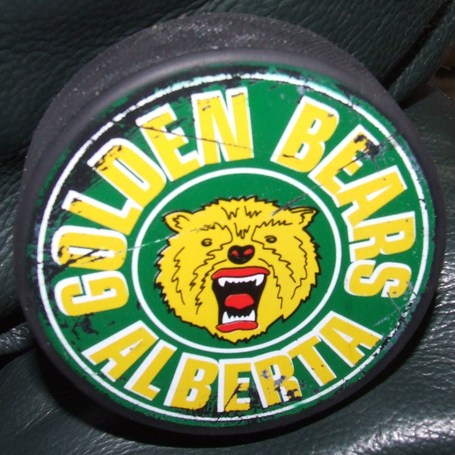