Where Can These Guys Play? Do They Need to be Signed?

Share All sharing options for: Where Can These Guys Play? Do They Need to be Signed?

The waiver system is something that's reasonably important to understand when we're talking about next year's roster.  It's also good to know which players you need to have signed to an NHL contract by next season (some of them by the entry draft) at the risk of losing negotiating rights.  There is also sometimes confusion about which league players are eligible to play in.  After the jump, I'll take a look at all of the Oiler players in our "Top 25 Under 25" series and talk about where they're eligible to play, whether they're already signed to an NHL contract for next season, whether they need to be and whether or not they need to clear waivers.

I suppose I could have written this all out, but I decided instead to put it in chart form in alphabetical order by first name.  Anyone who is highlighted needs to be signed in order for the Oilers to retain their rights: 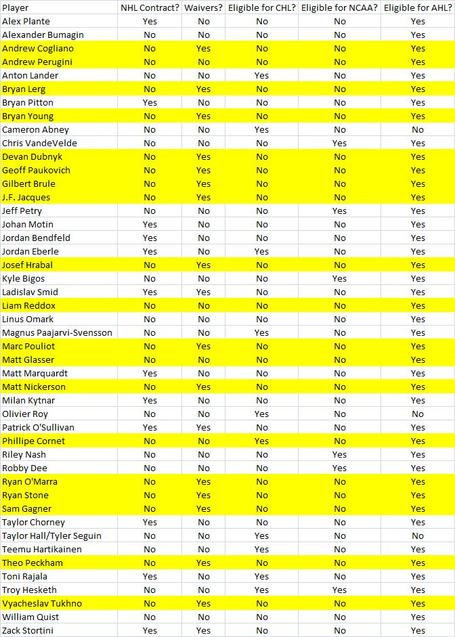 There's a lot of yellow on that list, and that second column about waivers may help some of these players earn an NHL job next season.  It'll sure help Theo Peckham if he needs to beat out Alex Plante and Taylor Chorney for work and it also may help Devan Dubnyk retain NHL employment.  Of the players who need to be signed in order to retain rights, I'd be interested in signing (or at least qualifying) Peckham, Cornet, Stone, Pouliot, Reddox, Brule, Dubnyk, Gagner and Cogliano.  That means we would be seeing the last of Trukhno, O'Marra, Nickerson, Glasser, Hrabal, Jacques, Paukovich, Lerg, Young and Perugini in these next few months.  Keeping in mind that the Oilers can only give out 50 NHL contracts, is there anyone on that second list that you'd be interested in saving?