Share All sharing options for: Chris VandeVelde interviews with The Copper & Blue

If there is any prospect in the Edmonton Oilers' system that fills a glaring need on the NHL club, it's Chris VandeVelde.  The centerman, currently playing at the University of North Dakota, is big (6' 2", 207 pounds), he's strong physically and strong on his skates, he's willing to work in the corners and in front of the net (see below), he's dynamite in the faceoff circle (he's never finished below .539 for a season) and he plays tough minutes in the best conference in the NCAA.  He spends time on the penalty kill, the power play and takes the most important faceoffs for the Fighting Sioux. He's everything that the team has lacks at the NHL level and his skills aren't duplicated elsewhere in the organization.  In watching him play this year, his style reminds me of Michal Handzus.

VandeVelde is putting the wraps on a highly-successful career at North Dakota, where he has a chance to finish with 50 career goals.  Past teammates Taylor Chorney and T.J. Oshie have gone on to play in the NHL and Oshie made the jump from the Fighting Sioux straight to the St. Louis Blues, a jump that VandeVelde hopes to complete next year.  Last week, I had a chance to speak with VandeVelde about his team, and their fight to get back to the NCAA playoffs.  Unfortunately, North Dakota was coming off of a sweep at the hands of Denver.

C&B:  You've had a really nice career at North Dakota after playing in the USHL for the Lincoln Stars.  Was there a specific reason that you chose to go the USHL / NCAA route rather than playing major junior hockey in Canada?

Chris VandeVelde:  Being from Minnesota and from the states, it was the obvious way to go for me.  All of the people that I knew were going that route, so I just followed in their footsteps and it worked out for me.


C&B:  How do you think that the NCAA has prepared you for the next level?

VandeVelde:  I think it's done a really good job.  It depends on where you play, but at North Dakota the coaches here do a really good job.  Obviously, they're trying to teach you that winning mentality, and get you prepared for that next level.  We've had a lot of guys that have come through here and are having success right now.  I know they do a good job and I'm excited for it.


C&B:  North Dakota's season has gone really well, tell me a little bit about the team and your season so far.

VandeVelde:  We started off kind of hot, and then tailed off a bit after that.  It was hard to find points when we were losing but we're back on track, even though we got swept by Denver.  I've been playing better the last five or six games and I'm leading a little bit better.  Hopefully we start rolling here soon.

C&B:  It's been awhile now, but early in the season, one of your teammates and captain, Chay Genoway, was hit from behind on a really dirty hit.  How did that affect the team?

VandeVelde:  Chay was one of our big leaders and he was our leader defensively.  He can score goals and he's great on the power play, so we had to regroup and some of the defense back there had to step up and take on a bigger role and we've done a pretty good job.  We brought a bunch of young guys in and I think they've really matured and help to fill the role.


C&B:  You went through a slump right around the holidays and through the new year.  You've broken out recently though - did you change anything or was it just bad bounces and puck luck?

VandeVelde:  I don't know if it was bad luck.  You know things just weren't going our way and points were hard to get there for awile for our team as a whole, so we're playing a simpler brand of hockey now and we're playing a more complete game and I think that's why we've seen a bit more success.


C&B:  I've been able to watch two of your games so far this year, earlier in the year against Wisconsin and the second Denver game.  In those two games, you've scored three goals, I think the Fighting Sioux need to get me a ticket!

VandeVelde:  I guess you're my good luck charm.

C&B:  You play in all situations, including the penalty kill and power play, but when you're at even strength are your typically matched against the other team's top line?

VandeVelde:  Yeah, usually my line is against their top line.  I think it's a good challenge and it's fun to kind of see where you're at nationwide when you play these good teams and play the good top-end forwards.  I think we've done a good job so far.


C&B:  You guys are probably headed to the post-season, where it looks like there's a really good chance that there may be four Oiler prospects in the post-season - Jeff Petry at Michigan State, Robby Dee at Maine, Riley Nash at Cornell and of course Chris VandeVelde.  Have you played against these guys?

VandeVelde:  Two weeks ago, we played at Cornell, so I got to play two games against Riley.  I've known Riley for a couple years now just from prospect camps.  It was a good time playing against him and we went into Cornell and got a split, and it was fun to see him again. 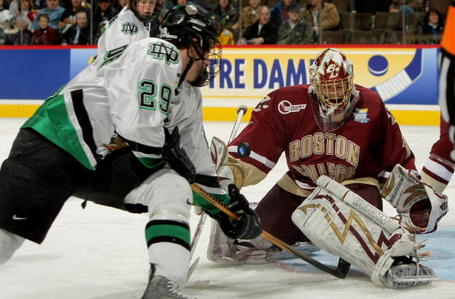 C&B:  You have a very talented team and a very experienced team.  If you can get rolling again, what do you think your post-season prospects look like?

VandeVelde:  We know where we stack up because we've played everyone in our league and some good teams nationwide, so hopefully if we get back on track and do the simple things right we can make the final tournament and maybe get back to the Frozen Four.


C&B:  You're a senior so it's your last year there at North Dakota, are you looking forward to making the jump to professional hockey or are you just focused on this year and getting into the post-season?

VandeVelde:  Obviously I'm going to focus on finishing out the year here and do everything I can for North Dakota, and hopefully have a ton of success.  But moving on, that's exciting too because I get to see where I'm at and hopefully play next year.


C&B:  You've been through a couple of camps now, and aside from speed because everyone says speed of the game, what is going to be the biggest adjustment to make the jump to professional hockey?    What are you really going to have to work on to make the jump?

VandeVelde:  Probably defensive play.  Everyone in the National Hockey League is skilled and so much smarter and better positionally, so work on my defensive game and work on being tougher, those are going to be the big things I think.  I'm going to have to play with a little more tenacity and know my role.  If I can do that, we'll see what next year brings.


C&B:  Do the Oilers keep in touch with you on a regular basis?

VandeVelde:  Mike Sillinger, who is the main development scout, watches a bunch of our games, and I get to talk to him quite frequently.


C&B:  Are you able to follow the Oilers at all?

VandeVelde:  Yeah, we have NHL Network and the NHL package, so I keep up with them.


C&B:  They're suffering through a terrible season right now, I think that they could use a penalty killer and a faceoff guy like yourself right now.


C&B:  Chris, thank you for the time, I really appreciate it.  Good luck and I hope to see you in the Frozen Four.

VandeVelde:  Thank you, have a good day.

Thanks to Jayson Hajdu, Director of Athletic Media Relations at the University of North Dakota for arranging the interview and providing the high-res photo of Chris. Thanks also to Kory Wallen and UND Athletics for the photo.