Share All sharing options for: Dial F for Fired

I haven't much cared for Pat Quinn thus far in Edmonton.  I've enjoyed listening to him talk about hockey after the games and on practice days but when the team is actually playing the games - you know, those things we keep on losing - his performance as a bench coach has been, well, frustrating.  For a good part of the season he's been rolling lines and defence pairings with little regard for match-ups.  He plays Strudwick in the last minute when all the other defencemen are healthy.  He gives Taylor Chorney the least zone-start ratio of anyone on the team at EV plus a bunch of PK minutes... with Strudwick (way to put the young offensive defender in a position to succeed!).  He plays J.F. Jacques and makes Fernando Pisani a healthy scratch.  He thought about taking Marc Pouliot out of the lineup despite generating more scoring chances than most of the team's forwards because the dude doesn't hit like Jacques does. The team as a whole, widely predicted to be bad, is actually on pace to be one of the worst in Oiler history. In other news, Ken Hitchcock just became available.

I'll say it right now.  I would be thrilled if Pat Quinn was fired and Ken Hitchcock hired in his place.  That last bit may be a bit unrealistic given the fact that Tom Renney is standing on the bench beside Pat Quinn these days but the first part certainly isn't.  If you start the season coaching a team that ends up finishing in the bottom three in the league, you usually get fired sometime in the next two years: 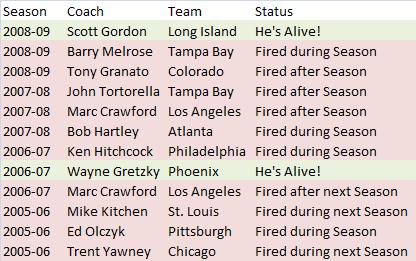 Within two years ten of twelve coaches were fired.  Wayne Gretzky's situation in Phoenix was one of the exceptions and was... rather unique.  And without saying that the Coyotes situation (on the ice) was all his fault, Dave Tippett seems to have that team playing a wee bit better.  Scott Gordon isn't out of the woods yet, especially if the Islanders take a great fall.  In some of these instances the coach changed despite the results not being his fault (John Tortorella in Tampa Bay seems like a good example).  In others (I'm looking at you Trent Yawney) the coach probably played a significant role in the team's failure.  I tend to think Pat Quinn belongs to the second group of more culpable men this season while Hitchcock belongs to the first.  If Pat Quinn is going to be moving down the road, I think the Oilers would be well-advised to go after Hitch.

It was yesterday that Scott Howson, general manager of the Columbus Blue Jackets, decided that firing Ken Hitchcock was in "the best long-term interests of the hockey team" despite the fact that Hitchcock "is an excellent coach."  The quotes come from Howson himself (you can hear the whole press conference at the Blue Jackets' website) and paint an interesting picture of coaching in the NHL.  It's not often that a manger will fire an employee that does his job with excellence but such is the nature of the coaching business in the NHL.  There are enough competent coaches out there that most managers seem to think that even excellent ones can be somewhat easily replaced.  And maybe that's true, but the Oilers sure didn't get it right last summer.

So why do I think Hitchcock is so good?  Well, first of all, I don't think the Columbus situation is his fault.  When Howson was giving reasons for firing Hitchcock he said that "it became clear that the message was not being responded to by the performance of the team.  We had lost some of our identity, some of our passion, some of our hard work and we certainly weren't checking like he hoped we'd check." Interesting language from Howson.  At the beginning I had assumed he was focused on wins and losses but his explanation at the end has as much or more to do with process.  I can get behind a firing based on process and maybe Hitchcock had worn out his welcome.  Howson didn't mention the Nikita Filatov situation, but I would imagine that played a role as well.

So why is this Blue Jackets team worse than a year ago?  The Blue Jackets goal differential this season is listed at nhl.com as -43 compared to -4 one year ago.  If we take out the shoot-out goals from the standings, the figures move to -37 this year and  -3 last season.  Next we'll look at the EV percentages.  So far this season the Blue Jackets have gotten a .902 save percentage five-on-five compared to .917 a year ago.  That shift in save percentage has cost the Blue Jackets 20 goals so far this season based on the number of shots they've allowed.  And you know the great thing about .917 at EV?  It's exactly average.  It's not like Hitchcock was asking for the moon from his goalies.  The other side of the coin is shooting percentage, which is also down at five-on-five.  They've been a below-average 7.1% this season after an above average season of 8.8% one year ago.  If the Jackets had shot 8.8% this season they would have scored an extra 12 goals.  So the percentages at five-on-five have cost them about 32 goals season-over-season.  They've also been outshot this year five-on-five (-0.53 shots per game) despite outshooting teams last season (+1.89 shots per game).  This last change can perhaps be left at the feet of the coach and could be what Howson was alluding to above with regard to the lack of identity, hard work and checking.  On the other hand, the team has been more disciplined this season when it comes to taking penalties (4.22 power-play opportunities against per game last season compared to 3.95 this season) and they've also done a better job on the power play (their goal differential of +36 on the PP already exceeds the +31 they put up all of last season).

Broadening out a bit, one of the ways I like to evaluate coaches is by comparing their performance at the NHL level with the coaches that immediately preceded and immediately followed them.  The methodology comes from the Contrarian Goaltender who did something similar while trying to determine the effect of Pat Burns on defensive play.  Hitchcock has been hired and fired three times which gives us five different coaches to compare him against:

The non-Hitch coaches are Bob Gainey, Rick Wilson, Bill Barber, John Stevens and Gerard Gallant/Gary Agnew.  In only one of the five instances was Hitchcock's points percentage worse than the other coach (John Stevens, but Hitchcock only coached 8 games in the sample season).  This number alone doesn't mean that Hitchcock is a good coach (Pat Quinn's number by this measure was also impressive) but combined with what I know about Hitchcock's aggressive bench tactics it leaves me feeling confident.  He uses players in a variety of roles (just look at the zone start for his defenders last year) that suit their abilities.  He matches lines (an example of a game in Columbus, dueling with MacTavish; no way in hell MacT gets Hemsky v. Voracek but he will see plenty of Hejda).  He forces his talented players to play the game without cheating for offence (see: Filatov spat).  He's just a good coach.  Oh, and Steve, he's from Edmonton!  And he worked for Hockey Canada!  Please hire him.  I'll record this song if it happens.