Share All sharing options for: The Irreplaceable Kyle Brodziak

It has been such a long time since we were last together.  I hope this letter finds you well.

We look upon your times here fondly and are excited to hear of your return.  Life has been difficult in the period since you left us for the great state of Minnesota and the future is bleak.  Our ranks are filled with old men, men who no longer want to be here among us and young boys, boys who are not ready to be here among us.

You may remember Mr. Marc Pouliot, though I know he was in ill health during your years here.  He was hoping to take on the work you left behind, but he fell ill again during the harvest as his pubis became inflamed.  The fellows here gave him a rousing ribbing and talked of his syphilis problem, which Mr. Pouliot looked well upon, though we knew it was but a lark.

We have a new man in charge here, he's older and unfortunately of Irish descent.  His heritage isn't apparent on most days and we find him appealing.  Like the Scotsman before him, he lays blame for our problems on the infantrymen on the lower lines and asks them to train until emptying their stomachs.  Early in his time here, he showed affection for O'Sullivan, the only other Irish here, but even he has fallen out of favor with the Old Irishman.  You would get on well with him, I reckon, on the days in which his Irish disposition does not flare.

We have not been able to get rid of the eyetalians, though there are whispers that he is trying to send the eldest away.  The brutish one has endeared himself to us with his lacking pugilism skills.  You may remember his "dancing hug", that has not changed.

Do you recall young Sam Gagner? He was the boy who kept dropping ammunition for the enemy while you were here.  I don't want to tell tales out of school, but there were rumors that the boy shook the yoke.  Like a young colt, Young Sam is stretching those youthful legs.  I don't blame the boy, I believe I would react with the wrath of our angry God should someone subject me to so much Hall & Oates.

That the infirmary is always full has not changed.  The townfolk blame Moreau the Elder and his blood-letting and leeches, but the General gives him support, so he stays on.  The General gives support to many of the men that should have been dispatched long ago.

Your skills and talents are missed here, and as the lads said you can never be replaced, it must smack of truth as the General made no attempts to hire a new man in your stead. 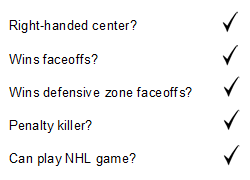 Your skills must be specialized.  We are left to wonder why the General dispatched you to the South, especially in our time of want, without sending for an adequate replacement.  The replacement boys have yet to win a faceoff against the opponent, and Bigos, of the 4th Brigade may never find his way out of the wilderness.

The natives here are restless and the General has determined that he should quell the uprising with talk of yet more young men requisitioned for the front lines, though we know better by now.  We cannot survive out here with young men alone, it is grown men that understand the rigors of life here.