January Desjardins NHLE: it's all about Petry, Eberle, Omark and Pääjärvi

Share All sharing options for: January Desjardins NHLE: it's all about Petry, Eberle, Omark and Pääjärvi 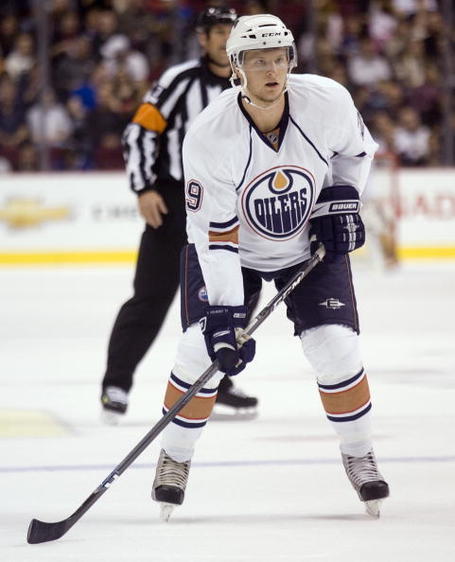 That's a wrap on January, so it's time for our monthly look at NHL Equivalency for the prospects in the Edmonton organization.  NHLE was developed by the irrepressible Gabriel Desjardins of the Behindthenet.ca and the outstanding Behind The Net Hockey.

Gabe's methodologies are described on his translations page:

One way to evaluate the difficulty of one league relative to another is examine the relative performance of players who have played in both leagues.  Players rarely play significant time in two leagues in the same year, but they often play in one league in one year and in another the next.  As long as a player’s skill level is approximately constant over this two year period, the ratio of his performance in each league can be used to estimate the relative difficulty of the two leagues.

Jordan Eberle has fallen off of the pace a bit, but he's still the leading NHLE point-getter in the organization.  Linus Omark continues to look like the goods in the KHL and Pääjärvi has been able to maintain a solid pace all year.  Teemu Hartikainen's pace has picked up, spurred on by his 13 points in 15 games since ending his military service and Jeff Petry continues to have a very strong season.

Riley Nash has slumped since our last update, but his team has not.  There's a very good chance that Nash, VandeVelde and Petry will all see the post-season this year.