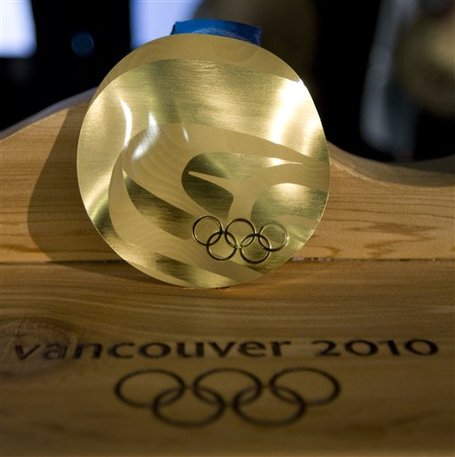 After 17 exhilarating days the Vancouver 2010 Olympic Winter Games wind down to a conclusion today with a showdown at high noon (PST) at Canada Hockey Place between two fierce rivals. The powers of North America, Canada and USA, play off for gold and something even bigger - bragging rights. This is not a game either side wants to lose.

Although I've already donned my jersey with its red maple leaf, I find myself strangely ambivalent as the Games wind down. I don't want to see them end, for one thing; it's been a dizzying 17 days with countless moments ranging from awful to awesome. Fitting of its host city the Winter Olympics have at times been the "Fall Olympics" featuring crashes galore, or the "Spring Olympics" with persistent rain and warming temperatures. Time and again the focus has been turned from hockey to other sports clamoring for their quadrennial moment in the limelight.

I for one have welcomed those moments, or should I say most of them. The tragedy of luger Nodar Kumaritashvili has hung over the Games from the opening day, and the exclusion of legally-blind skier Brian McKeever from today's cross-country marathon will mar its conclusion. But there have been uplifting moments galore, new heroes and old. My favourite Olympians of 2010 are three extremely tough women whose amazing performances were all ultimately cast in bronze: cross-country skier Petra Majdic, long-track speed skater Clara Hughes, and figure skater Joannie Rochette. Add to that the brotherly bond between Alexandre and Frederic Bilodeau; the graceful elegance of Tessa Virtue and Scott Moir; the single-minded four-year game plan and execution of Kevin Martin's curling foursome; and  the sheer exuberance of the Canadian bobsleigh babes, the short track speed skaters, and skeleton racer Jon Montgomery ... that list likely betrays my Canadian-ness, or certainly the Canada-centric coverage of the three channels I have been flipping among, but they are all great stories with many more than I have room to even touch on here.

Turning to hockey, the Canadian women delivered the goods in what unfortunately still amounts to a one-game tournament, with new heroes like Szabados, Agosta and Poulin joining established names like Wickenheiser and Apps, Ouellette and Sostorics. The rest of the world struggles to maintain the gap from the North American powers let alone narrow it, but the quality of play continues on its relentless upward climb.

Today the Winter Games draw to a close with a rematch of the women's gold-medal game on the men's side. A little more on today's showdown after the jump:

The two North American powers have emerged as the tournament's best, albeit in not quite such a clearcut manner as the women's game. My usual stance for international games - may the best team win - is a little more difficult to maintain in light of the possibility that Canada may not actually have the best team this time around. The young American team has posted an unblemished record of 5 regulation wins without a defeat; 22 goals scored, just 6 goals against. Canada on the other hand has allowed 14 goals on its bumpy path to the gold medal game, failed to beat Switzerland until the shootout, barely hung on to beat dogged Slovakia in the semi-final, and lost outright to USA in their previous meeting one week ago today.

That was USA's first Olympic victory over Canada in half a century, and the Red Maple Leaf is fortunate indeed to get an immediate chance at revenge rather than the usual 4-year wait. USA must beat Canada a second time to repeat the feat of Squaw Valley 1960 - a surprise gold medal, won 50 years ago today.

The rivalry's Olympic history dates back fully 90 years, with the two teams having met on 15 previous occasions:

Canada sports a 9-3-3 record, 59 GF, 37 GA. The only games of relevance, though, are the one previous gold medal showdown between the two in Salt Lake City 2002, and last week's American uprising in Vancouver. On paper Canada boasts the stronger club, but they need somewhere close to even goaltending, a committed defensive effort, and a blue-collar approach to make life difficult for Ryan Miller. The Americans on the other hand just need to keep doing what they've been doing. Today's game has already been over-analyzied to death, so I'll leave it at that and welcome reader input in the comments section.