Share All sharing options for: Edmonton's Top 25 Under 25: #3 Jordan Eberle

Of course the last time the Oilers actually needed a clutch goal was in the spring of 2006 when Eberle was turning 16, but hopefully they'll be needing a few more before he hits his 30s. Team Canada on the other hand could use this guy Today.

Just kidding on that last part, but Eberle has already made quite the name for himself on the international stage with a whole clutch of clutch goals. Over the past three seasons he has represented Canada once in the U-18s and twice in the U-20s, winning gold twice (both under Pat Quinn) and silver once. He finished in the Top 4 scorers each time, sharing the top of the leaderboard with hotshots like John Tavares, James van Riemsdyk, Cody Hodgson, Nikita Filatov, Matt Duchene, and Jordan Schroeder, not to mention fellow future Oilers like Magnus Pääjärvi-Svensson, Teemu Hartikainen, and (ahem) Taylor Hall. (Everything is bright in Oilerland once one learns to ignore the present!)

Nay, nay, the naysayers say, that's just the Tournament of Small Sample Sizes, not to be taken seriously even when the results turn out to be pretty darn reproducible after all. So let's put all that aside and look at his Desjardins NHL Equivalencies, right after the jump. 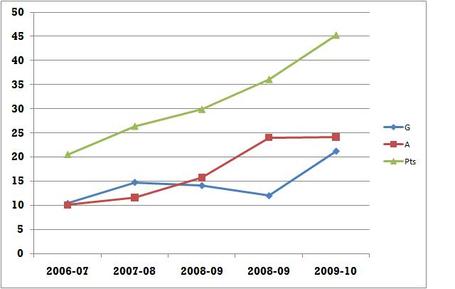 Might as well save myself a thousand words and start with a picture. The green line up top is the one of most interest here, as it represents points per game which is improving at an accelerating rate. Expressed in integers:

Note the presence of two data points for 2008-09, the first Eberle's NHLE for 74 points in 61 WHL games (NHLE = 0.30) and the second his 9 points in 9 AHL games (NHLE = 0.44) during his end-of-season pro tryout. While I agree that's a small sample size, the fact its data point fits so smoothly on the overall curve makes the case that this was just another small, positive step in Eberle's development, perhaps a stepping stone for his points explosion back at the junior level in 2009-10.

The expected jitter from the 9-game sample can be found in goals and assists distribution, whose curves are therefore less regular but nonetheless on a clear upward slope in both cases. A scorer and a playmaker both is young Jordan.

Eberle's playoff stats fit comfortably on the upward slope as well. Although they are yet again tiny sample sizes of just 6 and 5 games respectively, in both seasons his points-per-game rate increased from the regular season to the playoffs. In fact, in every one of his tiny sample sizes - 3 international tourneys, 2 WHL playoffs, 1 AHL call-up - Eberle scored at least a point per game each and every time. That's Clutch!

But those are only numbers. The other part of the scouting report must come from the old-fashioned seen him good . In all three of those live looks, plus the 2008 Top Prospects Game which was in my pre-blogging days, I came away favourably impressed by Eberle's game.

He's a very cerebral player, befitting the 2007-08 winner of the Doc Seaman Trophy as WHL Scholastic Player of the Year. Each time I've seen him I've been impressed with his understanding of the offensive zone, how to find the soft spots and when to exploit them. He has the scorer's gift of timing his arrival at the optimal moment, a nifty trait that has done wonders for finishers like Mike Bossy, Luc Robitaille, Brett Hull, Dino Ciccarelli to name just a few that scored a lot more goals than they were expected to on draft day. Subtle, but deadly.

Now Jordan Eberle does not yet possess a shot of the calibre of those snipers mentioned above so I should hardly put such weighty expectations on him. He does, however, seem to have a low panic point and that knack for surprising and beating goalies. I am fairly confident that those skills will translate at the NHL level. Moreover, that NHLE graph displays the curve of a quick learner.

To produce a couple of crude comparables, I put the upper end for Eberle at Joe Mullen, the lower end at David Oliver. The way I look at it, if he's even a little bit better than Oliver he'll be a useful NHL player. And if he's anywhere close to as good as Mullen, he'll be a star in this league.

As Rod Phillips is fond of saying, only time will tell. Or, as I laughingly said to my C&B colleagues who questioned my placing him so high on the prospect rankings, "As for the top of the list I think MPS will look a lot flashier not scoring goals than Eberle will scoring them."