The top 25 rolls toward the top ten with Theo Peckham, Teemu Hartikainen and Ryan Stone.  Stone will be turning 25 in about a month and has 35 games in the NHL.  And he's injured.  But - and it's an important one - he's shown signs of being able to help a good team win games in the NHL, a nifty trick for a member of the Oilers' organization.  If a prospect is below Ryan Stone on this list then at this point it's more likely than not that the player never helps a good team win games (note: this does not mean the player couldn't be a member of a good team; Raitis Ivanans is a member of the L.A. Kings, but he sure doesn't help them win games).  As individuals we all have different guys ahead and below Stone but, at this point, he seems like the best guy to use for a cut-off.

So what does that say about the other two guys being profiled.  Well, Theo Peckham was ranked above Stone on everybody's list but mine where he was ranked... lower.  Hartikainen bested Stone for three of us, this time with Jonathan and I acting as unbelievers.  The best proof that this methodology works?  Zack Stortini was ranked above Stone by only one of us.  Bruce thinks Stortini will help his team win games and everyone else remains skeptical.  Sounds about right, eh Bruce?

So read the profiles and decide for yourself!  Is this guy better than even money to ever be a useful player in the NHL?

Theo Peckham ought to have been better this year.

I'm getting that out in the open right up front. Peckham is big, strong, smart, and quicker than you probably think, but in his NHL callup he was exposed badly. His AHL numbers haven't blown the barn doors off, and he's twenty-two years old. The clock is ticking. At some point, a prospect has to put up or shut up.

So why in god's name did I rank this aging, fading light fourth?

Okay. First off, the Springfield Falcons. You know that abominable clusterfuck of a hockey team whose backup goalies are a combined 7-24-1, whose leading scorers are both 27-year-olds who've never played an NHL game, where the team lead for plus/minus among regulars is -4? Theo Peckham has been their best defenseman by miles. Bear with me, I know this is like praising the best golf course in Nunavut, but this makes sense.

The statistics, which are limited, suggest that Peckham plays the toughest ice time of any Falcons defender. He also plays more at even strength than any Falcons defender, which on this team just means more time in the jaws of the wolf. His power play production, traditionally the source of his offense, has stalled and reports are that he's getting less time as a power play option with the offensive presenses of Taylor Chorney and veteran Chris Armstrong.

After all that, Peckham is only a -7, which is a lot better than it sounds given that the only regular blue-liner ahead of him is Johan Motin, who is -4 with less ice time against easier opposition.

Again, Theo Peckham is 22. We expect a top prospect to be rocking the AHL at 22. But, in the third year of his professional career, this is the only one where Peckham hasn't taken a visible, statistical leap forward. Anecdotally, he remains an effective shutdown man whose numbers are hurt by situations and by his teammates. Like young Alex Plante, ranked below him, Peckham has brains and poise, but unlike Plante he has the body to back it up. Theo Peckham might not be able to own the NHL right now, but on a team that's mid-Fall for Hall he could certainly do better than Jason Strudwick.

It's not his fault that the Oilers don't see that. If I could bet on any Oiler prospect who would definitely have an NHL career, Peckham would be worth laying money on.

Through some bizarre, tragic failing of the human psyche, I rated Teemu Hartikainen four sports higher than Derek, and as a result I find myself in the position of reviewing his adopted hockey son. Wow. Awkward. Lot of pressure here, I don't mind telling you. What if I slip up and say something a little too negative? I'm going to be out on the streets of blogville begging for comment sections to drop my miserable little quips in.

I should be able to survive this one, though, because I think that Teemu Hartikainen is pretty much the balls.

"Well, yeah," say you the reader. "You ranked him seventh. Give us some of that penetrating Ben analysis."

Fine, then. Hartikainen is nineteen; he turns twenty in May. He plays in one of the five best leagues in the world, the Finnish SM-liiga. He plays well: he's currently sixth on his strong KaiPa team in points and has scored double digit goals for two years running. Unlike so many late-drafted European scorers he has respectable size, checking in at 6'1". Defensively he's not fantastic but for a nineteen-year-old Finnish scoring centre he's better than average. He can win faceoffs. He works hard and has the right sort of attitude. He's pantsing the paces of former Finnish failures like Jani Rita and Jesse Niinimaki. 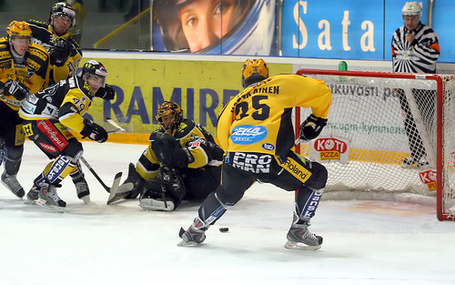 There's not a lot in Hartikainen to get excited about. We can't pencil him in as the next franchise player, and we can't even pencil him into an NHL lineup. His scoring touch is good, but is it NHL good? He falls into the "tweener" trap which I dread so much: he has decent hands and decent playmaking ability and decent footspeed but hasn't got that one remarkable skill to lean on. On the bright side, his overall package combines to make him a pretty effective even strength scorer, which is a tremendously good sign.

The best part of Hartikainen isn't his potential. He's not going to be Teemu Selanne. What should get our motor running with Hartikainen is his consistency and the near-certainty that he's going to have a shot at the show someday. He does a lot of little things well, and coaches always have room for someone like that in their lineup. To put it another way, you don't think that even a teenage Hartikainen would have been welcome when we were calling the lines of Ryan O'Marra and Colin McDonald from hockey Siberia this season?

The risks for Hartikainen are the usual things: injury, motivation, that he might take a short-term payday from the KHL rather than a two-way contract in Oklahoma City. But the odds are in his favour, and in a system packed with feast-or-famine prospects like Eberle and Paarjavi-Svensson, you can't underestimate that.

It's hard not to judge Ryan Stone exclusively by his NHL performance this past season.  He's been limited to 27 games but he's performed admirably.  His Corsi number is the best on the team for guys who have played more than five games (+1.6/15).  He's outscored at the second best rate on the club, miles behind Hemsky but just a touch in front of everybody else (+0.11/15).  Stylistically, he's exactly what this team needs: hard on the puck and willing to be physical but positionally sound.  What a great player!

Now let's look at the boxcars: 27 GP 0-6-6.  Yeah.  I know.  Not so good.  And his PDO number is right around 100 despite a very poor save percentage.  That's right, save percentage.  He's had 6 points this season with an on-ice shooting percentage of 11.8% at EV.  Granted that individual 0% should come back to the mean. He's also put up his strong numbers in a pretty good situation.  He hasn't been systematically sheltered but he has had more OZ draws (77) than he has DZ draws (69).  So offence isn't his strong suit so far in his NHL career.

Who is he playing?  Strange opponents.  Not tough, not soft.  Strange.  If you measure his Qualcomp using goal differential as the standard he's way down in 10th among Oiler forwards.  If you measure it using Corsi, he's up in 1st.  Curious.  He seems to be playing snake-bitten folks who aren't so snake-bitten against the Oilers.  Regardless, he's outshooting the outshooters.  He may not have a bevy of offence, but at least he's got the puck moving the right way.

So there you go, 27 games of Ryan Stone and the guy looks to be pretty decent.  But it's not like the guy never played hockey before this season.  His junior career is a distant bell at this point, but his AHL career is not so long ago and should give us some additional clues about what to expect.  First, the boxcars.  Through 258 AHL regular season games, Stone has scored 49 goals and 116 assists for a total of 165 points.  In the post-season his scoring improved to 11-22-33 in 44 games... and a +5... with - and I shit you not - 66 penalty minutes.... would anyone like to keep going?  At any rate, his best season as a scorer was likely last season, split between Wilkes-Barre and Hell where he scored 17-40-57 in 77 games.  Those are not the numbers of a scorer.  So, poor offence.  Check.

What about the outscoring thing?  Well, he was a + player every season and was a + player in two of three post-season trips ending his AHL career with a +27 total.  Not a bad track record.  Looking at the AHL QC from last season, we can see that Stone was in among the leaders, fifth among forwards.  Fortunately, Gabriel Dejardins also provided me with this data for the seasons from 2005-06 to 2008-09 for all teams. And with Stone, the numbers tell a story.  2005-06 was Stone's first year in the AHL and he ranked 10th of 12 forwards (min. 20 GP) in QC.  In 2006-07, he started seeing much tougher competition, ranking 2nd out of 16 forwards on the Penguins, behind only J.F. Jacques (aside: I've got to believe that this guy's back problems cost him something because he was a superior player in the AHL at this time and it can't be the same level of talent we're seeing in the NHL today) but ahead of other guys like Marc Pouliot, Kyle Brodziak and Tyler Kennedy.  It was more of the same over the last two years in Wilkes-Barre before he was traded to Springfield.  So, aside from his first year, he was able to outscore against solid competition in the AHL and was used ahead of some other players that have made good careers for themselves.

What else is there to know about Stone?  Well, in April of 2008 he was charged with public drunkenness along with Wilkes-Barre captain Nathan Smith.  Smith left the organization after the incident in the off-season and Stone was traded the next season.  While that's an unfortunate thing to have on your record, it may provide some insight into why Stone may have been traded if he was a pretty good player.

As far as the knee injury goes, it must be pretty serious.  He's listed on the Oilers injury report as out indefinitely and the Oilers have been pretty tight-lipped about a possible return.  I hope that the injury isn't chronic and that he's able to return to the lineup so that he can try his absolute best to swat down some of these prospects who are going to be coming hard after his job.  He had surgery on that knee once already this season and came back for 19 games before going on the shelf a second time.  He had an MRI and... that's all I can find.  Has he had surgery?  Did they amputate his leg?  When is the last time this man has been seen alive?