While many are again taking notice of Norway's Patrick Thoresen, the Norge have a another forward that has caught my eye.  He's yet to score a goal or assist on a goal.  He's not made any highlight-reel plays, and he's not been the Norwegians vocal leader.  What Mats Zuccarello-Aasen has done, however, is skate from end-to-end, throw his body around (as seen above) and play the game at the same speed or faster than the Canadians and the Americans.

Zuccarello-Aasen came to MODO of the Swedish Elite League from the Frisk Tigers of Norway's GET-ligaen after being pursued by nearly every club as his transfer window approached.  Since joining MODO, Zuccarello-Aasen has been the top producer on the team, playing both left and right wing and the point on the power play.  In 83 games in the Elite League, his totals read like an all-star:  30 goals, 61 assists, 91 points.  Gabe Desjardins' excellent work on league translations shows an eye-opening 70 NHLE points in that span.  The stat lines and translations are below.

The problem with Zuccarello-Aasen, of course, is his size.  At 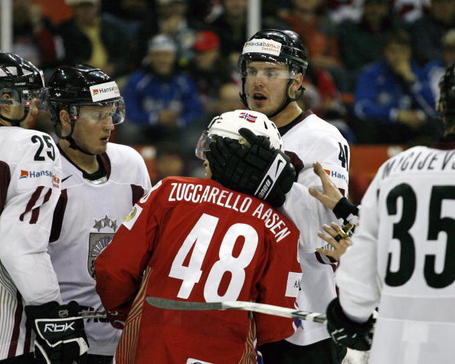 5' 7" and 165 lbs, he's the same height and ten pounds lighter than Brian Gionta.  The picture at the right shows Zuccarello-Aasen standing next to 6' 4" Raitis Ivanāns of the Los Angeles Kings.  While the NHL is a big man's game, occasionally a smaller player will succeed.  It's rare, but it happens and Gionta is a fine example.  While Gionta has become a perennial 20 goal scorer, he's been allowed to play third-level minutes by protective coaches, and has thrived in the NHL.  Gionta has learned the game and isn't afraid of playing in front of the net, nor will he stand down from a battle in the corner.  So it's interesting to compare their NHLE82 values during their 21 and 22 year-old seasons. Gionta's 21 year-old season came at Boston College where he tallied 54 points in 43 games, for an NHLE of 42 points.  From the chart above Zuccarello-Aasen's NHLE82 was 73 points.  Gionta's 22 year-old season came as he made the jump to the professional game in both Albany and New Jersey.  He combined to score 36 points in 70 games for an NHLE82 of 26 points.  Zuccarello-Aasen's season isn't over yet, but he's put up an NHLE82 of 68.  The devil, for Zuccarello-Aasen, will be in the details, like making the transition to the North American game and remaining an effective scorer and playmaker as Gionta learned to do.

If Zuccarello-Aasen is able to make the transition to the North American game and handle the more physical play here, his scouting report reads like a scout's dream:

He's a free agent to the NHL and a team that is desperate for playmakers at both the NHL and AHL level like, say, the Edmonton Oilers, would be wise to sign him to an entry level deal and bring him in for the 2010-2011 season.  If he's unable to crack the NHL lineup, he's certainly a step ahead of a number of the players currently in Springfield.  Giving him a season in the AHL would be a smart bet as it holds zero risk for the Oilers.  If the experiment fails, the Oilers are out an AHL entry-level salary and Zuccarello-Aasen is off to the SEL for a long and likely excellent career.  No draft picks wasted, no multi-year guaranteed contracts, no guaranteed starting positions on the NHL roster.  The Oilers would get a high-end talent for nothing and give themselves a chance at a real NHL scorer or tradeable asset as the deadline approaches in 2011.  Steve Tambellini should be on the phone with Zuccarello-Aasen's agent before the Norge leave Canada on Wednesday.