Our Top 25 under 25 breaks into the teens today, with a a trio of guys that are ranked as high as they are by way of the South Korean judge.  For those of you late to the party, the five of us ranked forty-five players in the organization under the age of 25.  You can see the entire series here.

Today's group includes a college center that Derek is praying turns out like Shawn Horcoff, a no-name Swedish defenseman that has quietly blown right past Taylor Chorney on our organizational depth chart and Bruce's adopted son.

Moorhead, Minnesota is home to two NHL players that have made it to the show, Mark Cullen and Jason Blake.  Chris VandeVelde will make that three.  The big kid (6' 2", 207 pounds) is in his senior year at the University of North Dakota, and if everything goes well, he will call it a wrap with 165 career games, 50 goals and 110 career points.  He's not an offensive dynamo, but he's a strong player with a variety of skills that does the tough and dirty work for the Fighting Sioux. 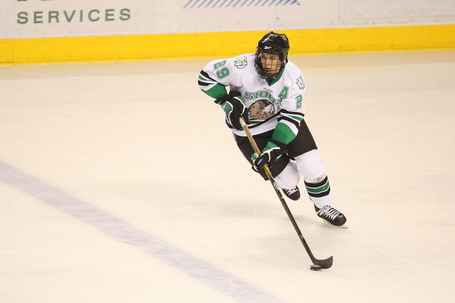 When I asked VandeVelde about doing the dirty work he answered with some confidence in his voice, "Yeah, that's one of the areas that the coaches put me in and I think I do a good job there in front of the net and in the corners.  Like you said, I kind of like getting dirty and getting some greasy goals.  I like playing in front of the net, getting tip goals and rebounds and I can always make plays too, so it's fun being in front of the net."

He's also been taking on the toughs in the WCHA, something that current Oiler Shawn Horcoff also did.  When I asked him about it, he was quite frank in his reply "Yeah, usually my line is against their top line.  I think it's a good challenge and it's fun to kind of see where you're at nationwide when you play these good teams and play the good top-end forwards."

A big center that is dynamite in the faceoff circle, plays tough minutes, plays on the penalty kill, battles in front, and battles in the corner is like an oasis in the Albertan desert for Oilers fans that have been crawling for four years.

So why am I the one breaking the curve by ranking him in the top ten, ten spots ahead of the next vote?  Mostly because I think VandeVelde has a very good chance to begin his NHL career in December of 2010.  He possesses nearly all of skills and traits that the Oilers are lacking in the middle right now and is probably the closest player in the organization to filling Kyle Brodziak's role on the team.  I said in the interview that his style reminds me of Michal Handzus, and I'm sticking to that.  I don't think he's got the offensive upside of Handzus to be a .5 point per game player, but I do think that he's got the rest of the game that will enable him to be effective in a specified role.

Well of course it was me who rated Zack Stortini the highest, so I get to write the blurb about the man I affectionately call Zorg.

His appearance in this trio with Chris VandeVelde and Johan Motin - all drafted between #94 and #103 in their class - highlights both the strengths and the limitations of the method, in which we attempt to rank every player in the organization under 25. The prospectophiles tend to see the foothills of a player's career and imagine the peaks beyond. I'll look at a medium sized hill and appreciate it for what it is.

What are the chances that Motin or VandeVelde play 200 NHL games? 30%? 50%? For Zack Stortini that chance is 100%, because at age 24 Zack has already played 204 games in the best league in the world. He has already more than covered his draft bet. VandeVelde for example is tracking well, but at a similar age Stortini was entering his third NHL season.

Change the question, since we are looking ahead, to what are the chances that any of the three will play 200 future NHL games? I still like Stortini's chances better than the others, because he is already an established, if marginal, NHL player. He made the league 3+ years ago and he stuck. Sure that could change, but is less likely than the probability that the other dudes simply won't make it. 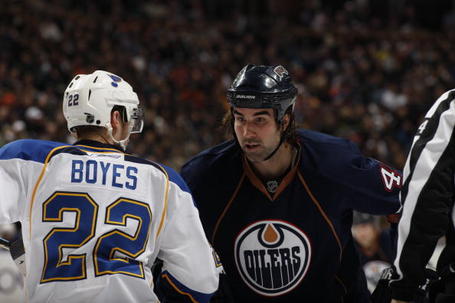 Change the question again, to what are the chances that any of the three will be a significantly positive difference maker. Who's got the greatest upside? The answer to that is probably not Zack Stortini, but how likely are the others to reach this imaginary pinnacle? Not likely.

Put it in Hockey's Future terms, where a number is assigned to a player's skill set and a letter to the likelihood he will achieve that. A VandeVelde or a Motin might be a 7.0 C or something like that. Zack Stortini is more like a 5.5 A+. His skills are limited, but he has already proven beyond a reasonable doubt that he will extract the maximum from them. In this respect he reminds me of kids of yesteryear like Kelly Buchberger or Marty McSorley who as prospects seemed to be 0% diamond and 100% rough, yet managed to carve out very respectable careers through sheer desire and application.

By the numbers, Stortini has always played fourth-line minutes, which have risen to around 9 minutes a night in 2009-10. Like most fourth liners his Corsi is nothing special, but he has managed to hold his own on the scoreboard. Over his career he is just -5 on a team that has allowed 141 more goals than it has scored; +2 over his three full seasons after a rough 29-game start in that awful stretch run in 2006-07 when the whole team was getting destroyed. In 2009-10 he holds a +2 rating on a club that has been outscored by 58 goals. Among the 11 forwards who have played 30+ GP, Zorg ranks fourth in GF ON/60, and first in GA ON/60. Some will scoff that he has just been riding the percentages - again! - and certainly there is merit in that assertion; Stortini has the best on-ice Sv% of any Oiler forward, for the second time in three years. Some of that is QualComp (lowest on the team) and some of it is luck. It should also be pointed out that he has the lowest QualTeam as well, and it's not close.

Looking ahead the modest peak I visualize for this player is at the bottom end of the top 9, a third line winger that plays mostly at even strength, in the manner of Chris Neil. For sure he brings some strengths that are very badly needed in the Oilers' forward corps, be it top 9 or top 12: size, intensity, consistency, discipline, physical play, truculence :), defensive awareness, willingness to go into the tough areas along the boards and in the low slot, and ability to play the cycle game. His hands are nothing special and will always limit his offence, currently in the low-double digits per annum, although 20-25 points might eventually be possible in an elevated role with more skilled players.

More agitator than enforcer, Stortini has shown a willingness to go with the toughest hombres in the league. In the current season he has scaled back somewhat on the scrapping, with his PiM:TOI ratio currently only about half of his previous career rate. Some of this is coach's preference no doubt, but some is attributable to a guy who has successfully fought his way into the league and whose priority now is to help his team on the ice.

The Vikings are coming to Edmonton.  Sure, everyone knows about Anton Lander and Pääjärvi from Pierre McGuire's insane rantings.  But the kid that's flying under the radar is Johan Motin.  Motin is the 6' 2" 202 pound defenseman from Kariskoga that stepped into the Swedish Elite League as a 17 year-old.  After three seasons in the Elite league, he transitioned to North America to play in Springfield.  In his first NHL training camp, Motin was impressive, hanging around until the final week and catching everyone, including all five writers here, by surprise.  Below is a chart comparing the four defensive prospects in Springfield for the current season.

The Qualcomp numbers are a best guess based on the boxscores that I've sifted through.  Motin's is playing the 3rd level minutes but is doing just fine, thanks.  Springfield has just one plus player, yet Motin is staying close to break-even and this is a truly awful team.  Motin offers little in the way of offense (he has 14 points in 143 games) and the NHLE is something more like 8 points in 143 games.

So why am I wrecking the curve on Motin?  I've got him in the top ten, a full eight places in front of Bruce.  Offense isn't where Motin makes his impact.  At the ripe old age of 20, Motin already has four professional seasons under his belt and has fared extremely well against North American opponents.  He's big, still filling out and he's a physical player.  He's been cast as shut-down player and he's handled it with aplomb.  If Theo Peckham makes the big club next year, Motin might be tagged as the first "defensive" callup and with a season of tough competition in Oklahoma City and some callup time, Motin should season well.  The Oilers shouldn't rush Motin, rather,  they should allow him to grow into the role properly so that when he is ready to push his way up to the big club, maybe as early as a 22 year-old, the Oilers will finally have someone to replace Jan Hejda.