The Top 25 under 25 is now under way with Ben's fantastic assessment of the rejects now in the books.  In case it's not perfectly clear what we mean by "Top 25 under 25" we're talking about any player in the Oilers organization that was less than 25 years old on January 31st.  Andrew Cogliano?  He's in.  Colin McDonald?  He's out.  As Ben said, "we're not ranking the best rookies, or the best players under twenty-four who have played fewer than fifty-seven and a half NHL games, or whatever other arbitrary criteria you'd care to throw out like a monkey in a cage."  No sir, we're keeping it simple and ranking the best 25 players under 25 years of age in order to get a look at what the Oilers have for the future.  And let's face it, Ladislav Smid means a lot more to the Oilers' future than Josef Hrabal.  It also serves as a good reminder for just how young some of these players are.  Ryan O'Marra is the same age as Andrew Cogliano.  Riley Nash is the same age as Sam Gagner.  Taylor Chorney is the same age as Ladislav Smid.  It's something to keep in mind.  After the jump, Derek and I take a look at the men ranked 23-25: Liam Reddox, Cody Wild and Olivier Roy.

Olivier Roy was taken 133rd overall in the 2009 entry draft which was a bit odd considering where he was ranked.  ISS had him ranked second among North American goalies, the Hockey News had him at 38th (the highest rank for any goalie) and Red Line Report slotted him in 56th overall (3rd among goaltenders).  But there were a lot of guys drafted ahead of  him:

Olivier Roy has always been highly regarded.  In his first QMJHL season he was named rookie of the year and made the CHL all-rookie team.  This season he was asked to come to the evaluation camp for the World Junior tournament even though he has two years of eligibility remaining.  As we see in the chart above, many of the scouting agencies rated him very high.  The obvious question when your team drafts a prospect who took a big fall on draft day is, why did he fall?  Mikko Koskinen, the first goalie chosen in the draft, is the extreme version of the reasons. The Islanders decided to take Koskinen because he's huge (6'5'') and because of his phenomenal numbers in Finland's top league (.931 save percentage and 1.91 GAA).  The discrepancies aren't that big when we compare Roy to all of the other goalies in the list above but they both remain largely true.  Only Robin Lehner had an inferior save percentage (in a Swedish junior league) to Roy's .906 and all of the other goalies are bigger than Roy who's listed at 6'0''.  So the only issues are results and size.  You know, nothing too major.

When it comes to size, things haven't changed.  I haven't heard of any huge growth spurt and goalies playing in the NHL are all still big guys.  That said, the size thing seems to be pretty overblown.  Tim Thomas, Jaroslav Halak and Marty Turco are all listed at 5'11'' and they've all done a pretty good job of stopping pucks at the NHL level.  Evgeni Nabokov and Tomas Vokoun have also been just fine and they're both 6'0''.  Sure, most of the guys who play in the NHL are bigger but some of the very best goalies in the league are about the same size as Roy so it's a concern that I'd just as soon dismiss.

This season it seems at first blush like the results are improving.  Roy is up to .909 this season and fourth among QMJHL starters (min. 30 games played) compared to .906 and sixth a year ago.  His save percentage is also well out in front of unheralded 19-year-old backup Christopher Holden who comes in at .895.  Unfortunately, some of that difference is made up for by the number of shots allowed when Roy is minding the net compared to Holden.  With Roy in goal the Eagles have averaged 29.1 shots against every sixty minutes.  With Holden it's only 26.7 shots against every sixty minutes.  Last year the splits were very similar.  Roy clocked in with a save percentage of .906, Holden with .892 but Roy allowed 29.9 shots against every sixty minutes and Holden only 27.1.  As a team, they're allowing fewer shots and fewer goals are going into the net but the improvement is about the same whether it's Holden or Roy minding the twine.  The shots against numbers are also widely divergent.  It might just be that Holden plays goal against weaker opponents but it could also mean that Roy is an inferior puck-handler, or, as is often the case, some combination of both.  This concern is supported when we look at Roy's draft report and see the following quote from his goaltending coach in Cape Breton, Scott Gouthro: "...He continues to work on his puck-handling, which is a key tool for the next level..."  It seems that Roy is more "stopper" than "sweeper" as Bruce likes to say, which means his save percentage needs to be better than some of his peers just to keep out the same number of goals.  At this point, I'm not sure we can say that Roy has made significant progress over last season.  He's a good-to-very-good QMJHL starter whose save percentage numbers may make him look slightly better than he really is.

Roy is a long-term prospect.  He's just 18 years-old now.  Jeff Deslauriers is 25 and some fans are still humming and hawing over his "potential" so it's not like we need to make a decision on Roy today.  So we wait.  Maybe he puts up huge numbers next year and becomes someone to watch for in the AHL going forward.  With goalies, you never know.

Cody Wild's recent demotion to the ECHL is another in a series of bizarre decisions by the men running the team (Daum?  Prendergast?) in Springfield.  That demotion was preceded by a series of healthy scratches in December and January.  The same series of events took place last year as well.  Wild was demoted to the ECHL and scratched a number of times.

So how in the world does a guy that can't stick on the worst team in the AHL deserve a 21st overall rank from me?  Well, as a guy that goes to the math when judging a player, I'm intrigued by Wild's comps. 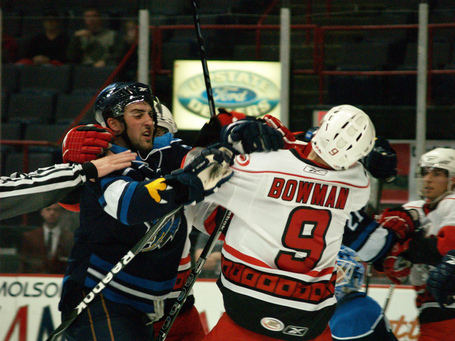 Taylor Chorney is six weeks older than Wild and Wild is five months older than Peckham, so if anyone is behind the curve, it would be Peckham.  Everyone who has had a look at Chorney is enamored with him.  He's got a number of physical skills, good skating ability, a nice shot and is apparently an excellent passer.  However, that has yet to translate to the pro game.  Chorney is a disaster at even strength and, as you would expect, better than 75% of his points come on the power play.  Meanwhile, Wild has just plugged away, producing the same amount of points as Chorney and only half of those coming from the power play.  He's also been twice as good as Chorney at even strength each of the last two years.  His coach has said some cryptic things about improving his game, yet he continues to outpace the guy next to him.  He's somehow become an organizational anathema.

What will Wild do, given the right opportunity?  He's got a similar build to Mathieu Roy, but plays the exact opposite game.  Roy is rugged, Wild is a passer and a breakout guy.  Roy blocked shots, Wild is effective on the power play.  Both lacked NHL skating ability when they broke in.  Roy's career was derailed by injury after injury after injury.  He is the Marc Pouliot of defensive prospects in recent Oilers' history.  Wild has remained healthy throughout.  Realistically, I think Wild has a similar value to Roy, had he remained healthy.  He's going to be a replacement-level player for some time until he learns the finer points of the defensive game, at which point he could slide into the bottom pairing on a team that could use a cheap and effective power play option.  I don't think that his opportunity will come with the Edmonton Oilers.

Optimistically, Wild ends up like Michal Rozsival.  They are a similar size, possess the same base skillset, and the same skating ability, the same power play background and the same longer learning curve.  in 2015-2016, Glen Sather and the New York Rangers will overpay Cody Wild by 100%.

The optimist in me believes that Liam Reddox is a player that will spend a lengthy (by average NHL career length) time in the NHL.  I've been a pessimist and a realist when it comes to the Oilers for long enough, so this is unbridled optimism.  He's been a bit of a late bloomer, but he's learned many of the things that guys like Andrew Cogliano haven't quite figured out yet.  He's never going to be a top-six player, but I'm quite certain that he's already figured that out.  This is pure speculation, but that realization may have been the catalyst to understanding the pro game at a more advanced level.  When I think of comparables for the career that Reddox may have, I'm always drawn to Richard Park and Pascal Dupuis.  Below are the NHLE82 values by age for each of those three players.

Both of the comps have superior skating ability and penalty killing skills that have allowed both to have effective bottom six careers.  Reddox lacks that blazing speed, but he possesses penalty killing ability and already has other parts of the NHL game.  I don't know if it's fair of Reddox to expect 500 games like Dupuis and Park, but judging by the NHLE numbers, Reddox is in the range of these guys.  Dupuis' 49 NHLE 82 at age 23 was the high water mark for his career, and Park has never again approached the 40 he posted as a 23 year old.  Reddox, outside of the season in the ECHL that he spent learning pro hockey, has been surprisingly consistent in his NHLE.  Never lower than 22, never higher than 29.  He looks for all of the world to be that quick-thinking third liner that can get the puck out, get the puck deep, stay on the cycle and kill penalties.

His window with the Oilers is going to close soon.  I think it's a good bet that Reddox begins next year as 14th forward in the organization, much like Park did early in his career, but he's going to have pressure from Chris VandeVelde as soon as VandeVelde understands the pro game, so remaining on the team is going to be up to Reddox and his health.  After VandeVelde, the following year Reddox will have to compete with even more forwards in Anton Lander, Teemu Hartikainen, Robby Dee and Riley Nash.  Reddox, like Park and Dupuis, is going to have to find the right role on the right team to start his NHL career, and it might not be the Edmonton Oilers.