On the Barker Deal

Share All sharing options for: On the Barker Deal

There were several moves made yesterday before the NHL roster freeze.  The roster freeze kicked in at 1:00 p.m. MST yesterday afternoon and will remain in place until 9:59 p.m. MST on February 28th.  Several teams decided to make a move ahead of the freeze instead of (or perhaps in addition to) waiting for the trade deadline on March 3.  One of the more interesting moves made just before the roster freeze was a trade involving the Chicago Blackhawks and Minnesota Wild.  Minnesota traded defender Kim Johnsson and prospect Nick Leddy to the Blackhawks in exchange for defender Cam Barker.  After the jump, I'll take a look at how this trade impacts both teams but with an emphasis on the perspective of the Minnesota Wild.

At the time of the trade the Wild were in a difficult position relative to the postseason.  They sat in 12th spot in the West with 62 points, five points behind the 8th place Flames and with two games in hand and seven points out of 7th place but with no games in hand.  The situation isn't hopeless by any means but Wild management also know that they're a long-shot to get in.  So what do they do with their pending unrestricted free agents?  All of Kim Johnsson, Marek Zidlicky, Eric Belanger, Owen Nolan and Shane Hnidy could carry value at this time of year and should the Wild decide to sell they could bring in some nice assets.  But that would then likely mean abandoning the playoff chase for the season.  The reason that this trade is so interesting is that it's an effort to create future value without giving up too much in the present. 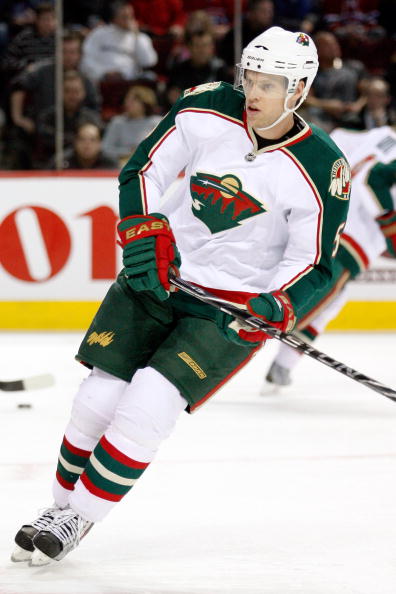 The NHL player going to Chicago is Kim Johnsson.  Not to be overlooked in the transaction is the difference in real dollars between Johnsson and Barker.  This season Johnsson makes 5.3M compared to Barker's 3.0M in salary which translates to a savings of about $690,000 over the rest of the season.  Those savings are pretty significant and may well be the main reason this trade was consummated before the Olympic break.

Johnsson's ability as a defender (as opposed to his contract's ability to move money around) is pretty substantial.  He was a first or second pairing defender for the Wild at even strength over the last several years.  Jacques Lemaire is a coach that sets defined roles for his players and in his last year with the Wild he tasked Johnsson with the role of "shut-down defender" in pretty extreme fashion.  Johnsson took on top competition and started almost exclusively in his own zone.  I exaggerate, but his ratio was one of the most extreme in the NHL with 292 OZ starts and 524 DZ starts on the season (his partner, Nick Schultz, was even more extreme with 182 OZ starts and 504 DZ starts).  His -3 at EV doesn't look like anything special at first but with that kind of context looks pretty darn good. This season Johnsson's difficulty level has been somewhat reduced and both his Corsi and EV +/- numbers have improved.  I think that this is a significant addition for the Blackhawks as a "this year" piece and if we're simply talking about the rest of this season I'm convinced the Blackhawks received the best player in the deal.

But Johnsson is after all an unrestricted free agent at the end of the season and the Blackhawks don't have any desire to sign him to an extension.  One of the reasons Barker was traded was to clear some salary before the crunch comes this summer!  So they needed a "future" component in the deal as well and that's where Leddy come in.  Leddy won the 2009 Mr. Hockey Award, an award given to the top Minnesota high school player.  At the time of the draft he was committed to going to the University of Minnesota and at the 2009 draft he was selected by the Minnesota Wild 16th overall (after Minnesota traded down from 12th overall), three spots higher than any major scouting service had him ranked (Red Line Report had him at #19; ISS at #21; McKeen's at #24; The Hockey News at #25; TSN at #29).  It seems that they had targeted him as "their guy" at the draft so I was very surprised to see him traded to Chicago.  His performance this year seems quite good.  He has 5 points in 19 games and is tied for the team lead in +/- at +7 (the team is +53 -52 at EV).  That said, he's still a prospect and could yet turn out to be a marginal NHL talent, especially if he doesn't grow a few inches (most NHL defencemen are bigger than Leddy who is just under six feet and well under two hundred pounds).  I do think it's saying something that a team that were as high on him as the Wild decided to send him down the road in his first season playing against legitimate competition. Just by virtue of the fact that Minnesota is the team that traded him, I'm a little bit leery but I think it's clear that the Blackhawks picked up a good (though not all-world) prospect.

And that brings us to Cam Barker.  The Wild pick up a defender who was selected third overall in 2004 and is 23 years old this season.  He's been a third pairing option for the Blackhawks this season, taking on the easiest competition and having the highest ratio of offensive zone to defensive zone faceoffs among regular Chicago blueliners.  If Quenneville hadn't taken away all of this PP time, this would be a classic pump, but alas, they were trading a man with only 14 points on the year instead of 40.  Nonetheless, the context suggests that Barker's results should be fantastic and he does indeed put up a strong Corsi number and a nice EV goal differential.  Last season Barker played second pairing minutes but still took many more offensive than defensive zone draws (308 OZ v. 211 DZ).  The slightly more difficult context saw Barker continue to post acceptable Corsi numbers (+9.4/60, but that's fourth among Chicago defenders) but it wasn't enough to keep him in the black at EV.  Despite a 40-point season last year, Barker hasn't been a particularly good EV scorer in the NHL.  In that 40 point season only 10 points came at EV.  This year, despite the offensive zone usage, he has only 8 EV points. His PP numbers are quite good but he hasn't been used on the PK.  At this stage in his career, Barker is an incomplete player that needs to be put in a pretty cushy situation to succeed.

That doesn't sound so good, but the key phrase for me is "at this point in his career."  Barker is very young.  So far this season there have been 31 defenders who have played at least 40 games at age 23 or younger and no team has more than two.  The reason?  Players at this stage of their career are still developing so many of them are only in the NHL part-time while others are full-time minor-leaguers - even many of the good ones!  He's currently in the first year of a three-year contract at 3.083M per season and at the end of his contract he is scheduled to become a restricted free agent which means he's under team control for the next four years.  Is he worth his contract?  Let's just say they're counting on him to improve and are paying in full for his PP offence.  But if he does improve and becomes a reliable second-pairing defender capable of an even split with his faceoffs and mid-range competition, he fits very nicely into the short-to-mid-range plans of the Wild.  We'll take a look at the Wild contract commitments for next year to illustrate the point (to help I'll use the following as a guideline and assume a 55M cap):

In terms of pay scale the Wild are in good shape going forward, though they'll need to get Koivu re-signed after next season and he won't be coming cheap.  The only area in which they've overspent is in net but they have more than enough room in other areas to compensate.  The Wild seem to be building a very good core group of players who will be between in the 22 and 29 years old next season and Barker fits nicely into that schema (Sheppard, Latendresse, Clutterbuck, Barker, Burns, Brodziak, Bouchard, Koivu, Schultz, Havlat).  It seems likely that he'll be counted on in for second pairing duty at EV and take significant time on the PP.  It's easy to see how Barker fits into a larger plan and why moving the value forward from Leddy (who wouldn't really be able to contribute much to the current cluster) to Barker makes sense.

And that's really the most interesting part of this trade - it involves a lot of pushing value around  Chicago sold some near-term future value from Barker for some immediate value in Johnsson.  The Wild sold some long-term future value in Leddy for near-term future value in Barker. The Blackhawks get a legitimate prospect, a better team today and cap room this summer to help them with an upcoming cap crunch.  The Wild get a young and likely improving defender that fits into their age cluster and whom they have control over for at least the next four seasons.  Both teams involved in the transaction had one eye on the present and one eye on the future in this trade, and that's something that we don't see a whole lot in the NHL.