In the last several game-day threads I've mentioned that, although the Oilers have been outchancing their opposition at even strength over the last several games (based on the recording of Dennis King), they've been doing it by shot quality rather than shot quantity.  Even though the Oilers have won a lot over their last ten games (they're 6-2-2), and have outchanced their opponents to boot (+155 -148 for a scoring chance percentage of 51.2%), they've still been outshot by a rather hefty margin (+289 -345 for a Fenwick percentage of 45.6% - for those who don't know, "Fenwick" is goals + saved shots + missed shots).  That large gap is very interesting to me, and prompted me to look at whether or not this shot quality advantage has been around all season.

If we look at just the season totals, the answer to that question would seem to be affirmative: through twenty-seven games, the Oilers have earned 45.0% of the scoring chances compared to only 43.5% of the Fenwick in their games.  Both of those numbers are, of course, terrible, but one is decidedly less terrible than the other.  Having said that, if we instead break these two numbers down into ten-game rolling averages, a very different picture emerges: 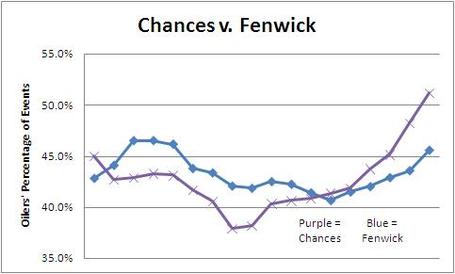 As you can see, the Oilers have not been able to generate shot quality consistently.  Through the first seventeen games of the season, the Oilers were actually underperforming what was expected of them based on their Fenwick percentage, at which point the trend reversed sharply and they began vastly outperforming their expected total.  The Fenwick percentage, meanwhile, has been much more consistent - the high point on the graph is only 46.5%, and the low point is 40.7%.  Since we already know that, over the long haul, these two variables tend to come together, and that past Fenwick tends to be a decent predictor of future goal differential, I'm inclined to see the Oilers' recent surge in scoring chance percentage a product of some improved play, and a lot of luck.

Having said that: improved play!  Any fool can tell you that this team has also been playing a lot better over their last ten games, and that comes out in both of these measures.  These last ten games are close to the high water mark in terms of Fenwick percentage for the Oilers, and considering how much more time they've spent with the lead, it's fair to say that the last ten games have probably been their best hockey so far.  Considering the significant roles that rookies like Taylor Hall, Jordan Eberle, and Theo Peckham have played so far, continued improvement is a pretty reasonable expectation (once the key vets get back in the lineup).

So why am I being such a downer?  Well, mostly because I expect the Oilers' scoring chance percentage to fall down significantly, even if they continue to improve on their ability to get the puck moving to the right end of the ice, and I don't want that continued improvement from the kids to feel like a disappointment.  Especially with Shawn Horcoff and Ales Hemsky out of the lineup, the important players on this team could be taking big strides forward even as the team's won-loss record falls into the abyss.  So let's try to remember that when the team goes on its next four-game skid.  When it happens, I promise to write about what's going right.