Tales From the Road: Sunrise

Share All sharing options for: Tales From the Road: Sunrise

I won't even try to lie to you, I had no idea what city the Florida Panthers played in. I figured it was somewhere near Miami, but other than that... no clue and why should I? The team is called the Florida Panthers, not any particular city. I supposed it was to make it easier for multiple cities to lay claim to the team, instead of a singular city. So off to the web I went to find that the answer was Sunrise. Sunrise is situated in the large area that is essentially the Miami/Ft. Lauderdale mega city. While driving you would never know when you left one city and entered another. I did make the mistake of saying just that at the game December 7, 2009 where I learned that the hockey fans of Sunrise Florida are a very proud if not small group. The other thing that Sunrise lays claim to in an extremely large outlet mall that many people returning or going off on cruises love to frequent. I've even been told that many an NHLer loves to get their shopping done here.

Outside, the weather was fine and fairly humid for a girl from Alberta. I had spent the day in shorts and flip flops while all around me the locals were pulling their jackets close to them and trying to stop their teeth from chattering. As I got ready for the game, I didn't put much thought into the temperature changes, I threw on my jersey and off I went. This was my first lesson on hockey games in a warm climate, on a warm day... I froze once I entered the arena! Here in Alberta, you just don't notice that much of a temperature difference from the outside to the inside at the beginning of the season. By mid season, its usually far warmer in the arena than outside. What was I thinking? Clearly the sun and the heat had gone to my head. Flip flops, shorts and a jersey is not appropriate attire for a hockey game played on ice, no matter where you are.

Walking inside the front doors, I was reminded of just how foreign the metal detectors are for me. I find it strange that fans must pass through metal detectors, but are allowed to have their beer or coolers in bottles. In Alberta, the concern is that you might throw your bottle at other fans or the players, or even just on the ice. I don't even want to think what the metal detectors are supposed to prevent. The second thing that struck me was the carpeting in the concourse, and how extremely wide these hallways were! The carpeting I guessed must be to help prevent slipping due to the humidity and moisture, but they must also see a lot of rotting, or the carpet being worn fairly frequently. After that, you were able to see the variety of vendors. Ice cream and candy were very prevalent. The candy station was quite large, like three or four beer vending stations in Rexall all combined. The team store is HUGE! The entrance is a Panther's head, you walk through its mouth. I like the idea of a large store with everything you would want to consider purchasing, but don't think that it would work in Edmonton or Calgary. There would be so many fans crowding the store, you would struggle to move around let alone select or purchase anything. 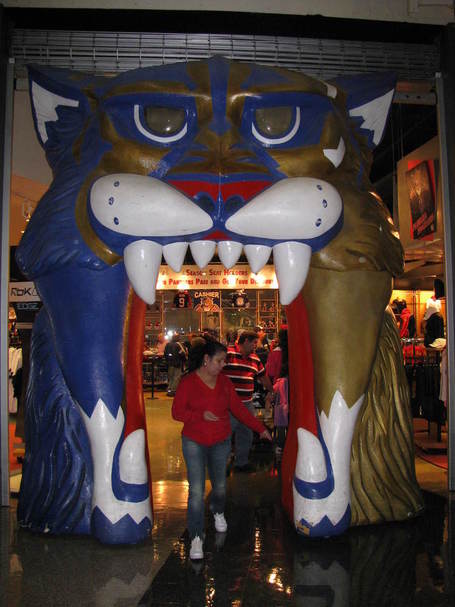 The arena attendants were pleasant and knowledgeable about their team and clearly chilled to the bone. Most were attired in scarves, hats and gloves. I'm sad to report that there were not many hockey fans to talk to before, after or during the game. I was expecting this, I had seen games in Sunrise on TV. This game was a Monday night, it was in competition with the NFL for sports fans' attention. Perhaps if this game had been on a Wednesday or a Saturday night there might have been a few more fans in the stands but there is no way for me to know. I did find it depressing that this much money was being spent to ice a team, to house a team, to train a team, for a team to travel, on the arena, etc, etc and yet there are so few fans in the stands and I can only assume so few watching on TV. It may be my Canadian side, but I want more people to enjoy the team and the sport if it is to remain in Florida.

Radek Dvořák reached a milestone with this game, and it was fitting. Dvořák played his1000th NHL game for the Panthers against the Edmonton Oilers, even though only Horcoff and Hemsky remain on the Oilers from that amazing 2006 cup run. Those in attendance were applauding loudly, but... I'm sure you don't want me to tell you again that this Monday evening in December, the crowd was sparse and consisted of a lot of Oilers fans from Edmonton, or Canadians in town until their cruises departed. 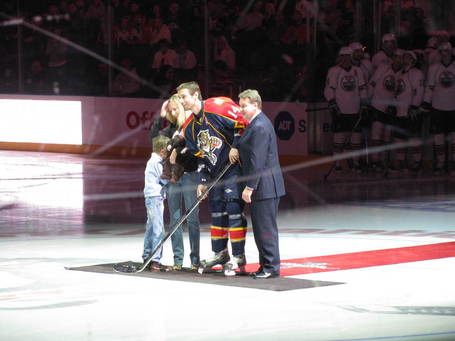 The arena itself was quite comfortable and spacious, it felt like a new arena, one that I would be glad to watch games in if this was back home in Edmonton or even Calgary. Situationally, the arena offered free parking, and plenty of it. It's across the street from the giant outlet mall, and not much else. There was no public transit that I could find, or was made aware of. You have to keep in mind that many American cities are not designed or built with the purpose of having people get around using public transportation, but rather their own vehicles. A cab ride from downtown Miami will run your about $80 to get to the Sunrise arena. I think my choice to get a rental car was a good one. 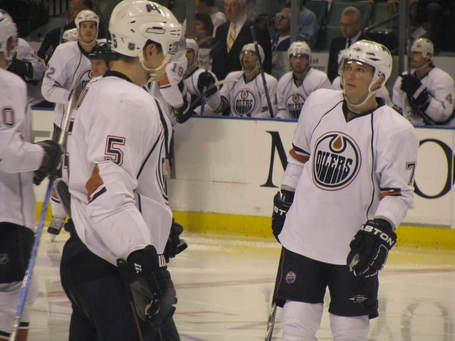 I don't think Lubo understood what Laddy was trying to say here...

Yes, there was a cheer team, and they actually danced on the ice in their slip resistant shoes, but those girls looked frozen! There were a number of fans from Edmonton (some who had paid a measly $15 for their lower bowl tickets) and various other locations that sat and watched the dance, but most fans, as you can see in the photo below, left for a snack or a refill of their beverage. If there was a hockey market that could use the ice girls to attempt to garner new fans or attention, this must be it. Is it effective well I'd have to do more research to know for sure. 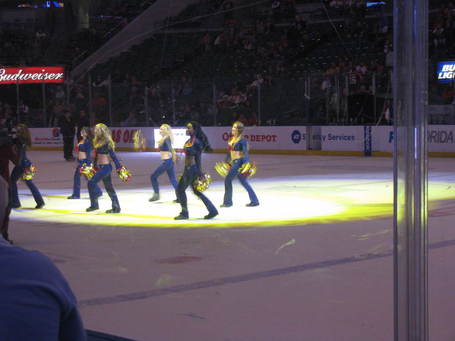 The game wasn't too exciting, but I did feel like I was watching alone. My phone died pretty soon after everyone had to text me to tell me they had just seen me on TSN celebrating Visnovski's assist towards the end of the first period, but otherwise... There was a fan in my section who was wearing a Miami Dolphins hat and booing each and every Oilers' player, and by name. Curious I asked him what the deal was, turns out he was a Flames fan and just happened to be in town from Fort McMurray. Sheesh! Even on vacation, I just can't escape the reach of Calgary or the Flames it seems. Behind me a group of teenagers who really knew their hockey. We had a good discussion of the game and the players in the system. This group of guys was the saving grace of the game for me. They had tickets for higher sections, but were able to sneak down to the lower bowl, good for them I figured. It was wonderful to talk to hockey fans who lived in the area. I hope they can make fans of their friends. Good luck boys, be fruitful and multiply... something like that right? They just have to convince 2 people, who can then convince 2 people and hopefully, eventually the Panthers will be a have team.

The Oilers had begun their roadtrip with a win in Vancouver, Detroit and Dallas. They left Sunrise with a shootout win courtesy of Shawn Horcoff. I caught up with this roadtrip midway through, but I was a part of the infamous 5 all wins road trip of the 09-10 season and they can't take that away from me. 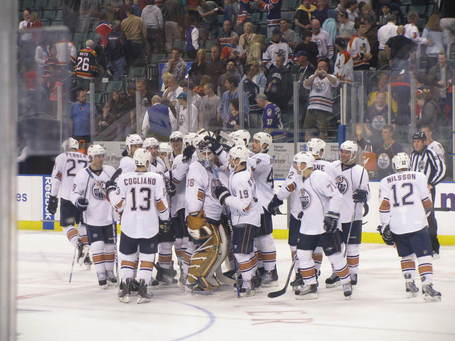