A few days ago, I wrote about the tendency good teams have of winning more often by two or more goals.  Since there's almost no correlation in a team's ability to win one-goal games, it seems that a team's record in those close games is often a function of luck.  That doesn't, of course, mean that a team winning a lot of one-goal games is poor -  good teams will win a lot of one-goal games - but it does mean that a team winning very few games by two or more is probably poor.  In the comments, J.P. from Japers' Rink (who know their punctuation rules) asked me if the totals flushed games where a team was up by one and then added an empty-netter.  At that time, they didn't but I've now updated the list so that those games are now flushed (as well as any games where the team wins by three but added two late empty-netters).  And you know what?  J.P. is going to wish he didn't ask.

First up, let's look at the Eastern Conference: 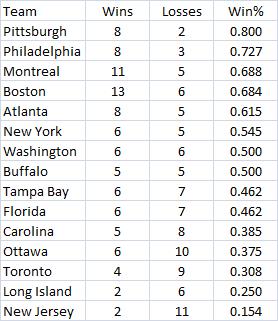 The poor Capitals were much better in the last iteration of this chart, but suffer tremendously because four of their "clear" wins included an empty-netter, but all six of their losses did not.  All of the other teams have stayed reasonably consistent, although Atlanta has certainly moved up the chart in a short timespan.  Probably the most interesting thing for me out East is the two Florida teams.  The Panthers have been a much better team at EV, but they've had terrible special teams, and they've lost a tonne of close games.

Now let's look at the West: 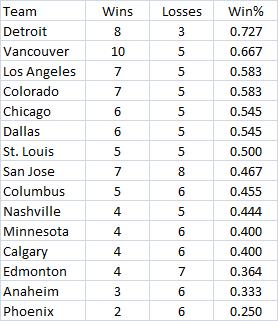 Again, one team is getting murdered compared to the last look because they've scored a lot of empty-net goals.  The Phoenix Coyotes have five wins this year by two that included an empty-netter and no losses that involved an empty-net goal.  Last season, the Coyotes were legitimately outshooting teams.  This season?  Well, if you look at all of the other teams at .400 or lower in both conferences, you get an idea of how lucky the Coyotes are to be holding down a playoff berth in the West right now.

Finally, I wanted to look at how each division is doing.  Obviously, a lot of games will count as both a win and a loss in this calculation, but it should still be somewhat instructive for determining division strength:

It's very interesting to me that the Eastern Conference is actually above .500 (by one game) using this metric.  I definitely would not have guessed that when I began, and I definitely wouldn't have thought the Pacific would come out on the bottom of the table.  There just hasn't been anyone in that division playing all that well so far this year.

Finally, Antro mentioned in the comments to the last post that it would be interesting to look at these standings periodically, and I completely agree but don't really want to write a new post about it every week or month.  As such, I've added a widget to the right-hand sidebar, and will update it daily, which should allow those interested to track this version of the standings whenever they want.