As we all know, drafting goaltenders successfully is witchcraft, even for NHL scouts.  The failure rate is extremely high, particularly given the relative success with forwards and defenders in the first two rounds, which suggests to me that teams shouldn't be using high picks on goaltenders, and instead should focus on signing goaltenders as free agents or using later picks on goalies that have stuck around.  At least so far, that's exactly what the Oilers have done under Stu MacGregor.  Even better, Olivier Roy, one of the goalies that the Oilers picked under MacGregor, is now the starter for Team Canada in the World Junior Championship.  We all know that's a great sign, but just how good is up for some debate.  After the jump, I'll take a look at what other Team Canada starters have done later in their careers.

First off, here are all of the Canadian starters since the year 1989 along with their NHL games played and career regular season save percentages: 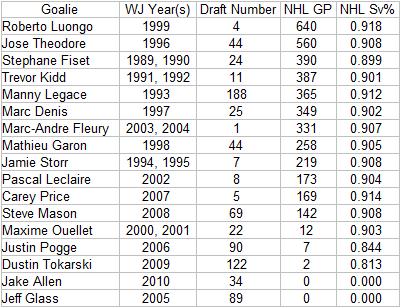 So what should we take from these results?  Well, the failure rate is definitely lower with WJC starters than it is with the general population of goalies, which is to be expected.  Only five of the seventeen starters (including the last two) have played less than one hundred games, and there's a very good chance that two or three of the goalies between 100 and 200 will get over 200 games for their career, a phenomenal rate of success compared to the entire population of drafted goalies.

Having said that, for the most part, the save percentage performance of these goaltenders isn't exactly dominant with only three goalies above .910 on their career (although for a guy like Jose Theodore, career stats undersell how good he was for a short period of time).  Furthermore, an awful lot of these players are high picks, which likely means that they received more chances to win an NHL job - an advantage that Roy, who was taken 133rd overall, doesn't have.

In the end, I think this list is good news for the Oilers and better news for Olivier Roy.  Starting for Canada is a prestigous gig, and one that should earn him leeway that isn't usually present for fifth round picks.  With only two goalies with a goose-egg in the "NHL Games Played" column, there would seem to be a pretty darn good chance that he'll get an NHL shot.  For the Oilers, a useful player in the fifth round is always a nice surprise, but with the price of unrestricted free agent goalies extremely low, there may not be much hope of Roy providing much surplus value even if he does make it to the NHL.  But if he does... what a magnificent pick.