Oilers Fall To Sabres 4-2, Play In A Fog For Landeskog Under Way

Share All sharing options for: Oilers Fall To Sabres 4-2, Play In A Fog For Landeskog Under Way

Nikolai Khabibulin was able to distill the essence of the Steve Tambellini-led Edmonton Oilers down to a single play tonight.  With the Oilers trailing by a goal and under 2:00 remaining,  the Sabres dumped the puck in from the wrong side of the red line.  The race was on as Patrick Kaleta crashed in at the same time as Jeff Petry and Ladislav Smid.  Rather than allow the defense a chance to win the race and pick up an offensive zone faceoff, Khabibulin stepped out of the crease and played the puck, thus negating the icing.

The game was ten minutes of domination by the Oilers marked by a Dustin Penner goal on a beautiful play by Ales Hemsky, and fifty minutes of a last-place team trying to cover each other's mistakes: Drew Cogliano's drop pass in front of his own goal.  Sam Gagner's HUA in failing to cover Luke Adam coming into the slot that allowed Adam's goal.  Linus Omark's wonderfully comatose play to bring the puck into his own zone then pretend it was a grenade led directly to Mike Weber's goal.  Nikolai Khabibulin playing Amsterdam red-light district with his five hole on Jochen Hecht's goal.  The Czech Junior Team made fewer bone-headed plays against the Canadians in Buffalo today.

The latest rookie to step into the fray was Jeff Petry.  He was up and down in this one and gave up as much as he generated, but he showed enough skill and made a number of individual plays that make it impossible not to notice the underlying talent there.  His individual defense against Rob Niedermayer to begin the second period was outstanding.  He stopped a breakaway following the Oilers power play and he made a series of calm decisions in the first that seemed to belie his age.  He did give it back though - turnovers and some serious indecision cost the Oilers a number of scoring chances, but those are things that will hopefully melt away with time. 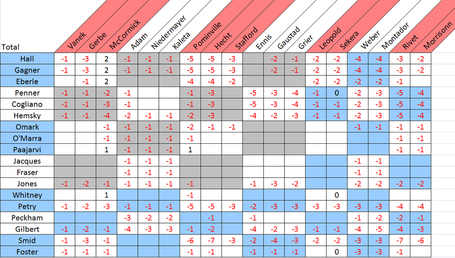 The Good
Tom Gilbert played 30:20 on a bad knee.  He was outstanding throughout the evening, and was the only blueliner with a clue on the power play.  Theo Peckham played this one like a veteran and was one of the few Oilers not overwhelmed in the last fifty minutes of this one.

Two out of three ain't bad, so Jordan Eberle is at the top of the heap tonight.  His first period was phenomenal, possibly the best period he's played all year.  He disappeared for a bit in the second and then came alive in the third.  One fun thing to watch for is when Eberle darts in and steals a puck before a board battle begins.  The defender expects to engage and Eberle is in and out with the puck before the defender knows what happened.

I don't know what to write about Andrew Cogliano any more.  He gets into a game by winning a couple of faceoffs and the rest of his game goes to hades.  Turnovers plagued him in the first and it seemed the puck died on his stick every time he touched it..  The Sabres were able to rip off two extended sequences against the Cogliano line and in both instances, Cogliano was running around in his end, not doing much of anything.  Regular readers know my disdain for the drop pass but I do admit it's sometimes an effective play - just not in front of your own net.  Ever.

I feel like I may have written this before, but the Edmonton power play is painful to watch.   The last power play was better, but prior to that it was once again all about forcing the puck to specific spots on the ice, either Kurtis Foster or Ales Hemsky.  Kill it, kill it with fire.

Nikolai Khabibulin's five hole is real and it's spectacular.  It's also about the size of a foot locker.  His positioning and play on the Jochen Hecht goal was just pitiful.