This update might seem a little more concise than past weeks, but it is afterall the holiday weekend.

This past week in Oil Country, Gilbert Brule came down with a flu that has kept him from travelling with the team. Otherwise, no injuries this week! Fantastic right? Yes it is, especially with a light playing schedule like the team has had this week. Playing the Sharks on Tuesday the Oilers did much better than some (I mean me) expected, but still came out with a loss. It wasn't all bad though. Ryan Whitney, after 24 assists on the season finally managed to score his first goal of the season. This goal was interesting as it cleared past what seemed to be 5 players, and was credited to Penner even though he didn't appear to touch the puck at all. Later in the day on Wednesday however the goal was changed and credited to Whitney. So hooray, but too bad he didn't set a new NHL record for the highest number of assists without a goal in a single season. Thursday night the Oilers were in LA. As expected this game went to a shootout. The kicker was that for the first time in 6 meetings at Staples Centre that have gone to a shooutout, the Oilers actually lost. Jarett Stoll was credited with the game winning goal.

Oilers' goaltending prospect Olivier Roy saw his first chance in net for World Juniors pre-tournament action in Toronto Tuesday against Oilers centreman prospect Anton Lander's team Sweden. Roy and the rest of Team Canada had a great showing, walking away with a 4-1 result.

Speaking of Toronto, there was so much to talk about last week, that I didn't get to discussing the waffles that were thrown onto the ice in Toronto. The first round of waffle throwing seemed so completely random and strange, but it has happened again. This time the fan has been fined, charged and banned for life from the ACC. Can you imagine going to a game with frozen waffles in your pocket? And why? What was the next step? Someone would bring maple syrup? That does sound Canadian, and I guess it goes with Maple Leafs. Still strange happenings in Toronto. We do often hear that there is just something in the air, this time it might be a touch of the crazies.

Here is the first MS Paint calendar for the year 2011. Jandermeer: 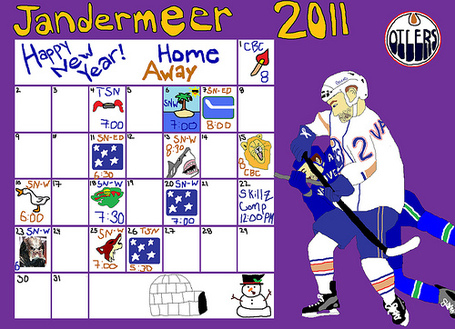 New Jersey in a surprising, yet not at all surprising move fired their head coach John MacLean two days before Christmas, and on a game day, to bring back coach Jacques Lemaire. Many of you may feel confused and you may even be thinking to yourself hasn't he always been the coach? The reason why you might be thinking this way is that this is indeed Lemaire's third time coming in to coach the Devils. Will this move turn the team around? It's doubtful but the Devils really don't have anything to lose. After the Ilya Kovalchuk drama of the summer, the Devils have a lot to live up to.

The NHL made it onto the Price is Right on Monday and Lauren did not win the prize that she was so excited for. No, no trip to Pittsburgh in January, no tickets to the outdoor game, jerseys, winter tires or even the new car. Although Lauren did not win what most of us would have loved to have won, it gave most of us something to talk about and let some out there know that Bob Barker is no longer the host of the show. Who knew?

The HBO series 24/7 Winter Classic continued this past week with episode 2 airing on Wednesday night. I can't say enough good things about this series. If you haven't seen it yet, you can watch it online on the HBO websites. If this is something that doesn't interest you, that's ok, so be it.

Pavel Datsyuk was injured during a game this week and is expected to miss a month due to a broken hand. Luckily for Datsyuk this will not require surgery.

I thought that I would have time to put together a nice list of blogs for you to read, but I didn't. Instead I offer you some of these holiday YouTube videos!

I wish a Merry Christmas and Happy New Year to you all. Now bring on the World Juniors, Spengler and minor hockey tournaments in your neighbourhoods.