The Oilers arrived in San Jose missing Shawn Horcoff, Ales Hemsky, Jim Vandermeer and Gilbert Brule, who was home with the flu.  Tom Renney was tasked with taking on one of the best outshooting teams in the league with five rookie forwards in the top nine, Jason Strudwick on the top pairing and no shutdown pairing.  Taylor Hall, Sam Gagner and Jordan Eberle made up the first line, Dustin Penner, Andrew Cogliano and Ryan Jones were on the second line and the all-rookie line of Linus Omark, Ryan O`Marra and Magnus Paajarvi made up the third.

At one point in the first period, Sun writer Derek Van Diest tweeted something to the effect of "The Gagner line is the only line generating offense.", as if there could be any other way - look at those lines.  After the first period, the Oilers had five shots on goal, three from Gagner, two from Eberle.  The Sharks also had five shots on goal, but the story of possession could be seen in the Corsi totals - Antero Nittymaki was -11 while Hall was +11, Gagner +12 and Eberle +8.  The line that wasn't born in 1988 dominated the game, but only one Oiler was negative for the period, Ryan Jones at -2.  The Oilers even killed off a penalty.  O`Marra was winning faceoffs!  He was 4W 1L in the circle during the first.  Also in the first a mainstream columnist, as is their custom when even just one period goes well for the Oilers, shot his mouth off like a drunkard in the parking lot after a game.  Someone by the name of John MacKinnon, apparently employed by the Edmonton Journal, tweeted "Watching these #oilers, find I'm not missing the work of Mr. Horcoff. At all. Anybody pining for Horc? Didn't think so."

The second period was a reminder that it was the Sharks and Oilers.  O`Marra took exactly one faceoff in the second period and the Sharks won 14 and lost 10, one of those leading directly to a goal.  The Oilers drew two penalties to go on a 5-on-3, then everyone stood around waiting for Ales Hemsky to come down out of the press box and save them which led to a breakaway for Logan Couture and a penalty on Taylor Hall, nullifying what was left of the power play.  Couture scored his 18th of the season after stripping Omark of the puck and charging hard to the net where he received a beautiful feed from Ryane Clowe to beat Nikolai Khabibulin. The penalty kill broke down, the defense broke down and the Oilers were getting beat up in the faceoff circle.  Thank goodness Shawn Horcoff is hurt, huh MacKinnon?  How do you people have jobs that require critical thinking?

Finally, in the third period, Tom Renney put the Ryan Jones on the second line experiment out of it's misery and threw Paajarvi on the right side of Penner and Cogliano and that line responded with an excellent period.  The Sharks got handful of chances, but as is typically the case of a team with a two goal lead, they sat back a bit and were content to counterpunch.  The Oilers second and fourth lines carried the play in the third, especially Zack Stortini and Dustin Penner, freed of his burden of carrying both Cogliano and Jones in both ends of the ice.  Stortini, in concert with the defense at the point, single-handedly kept the puck in the Sharks zone for thirty-five seconds during one shift, in spite of Jacques consistently lagging behind the play by two steps.

The Oilers pulled to within one late after pulling Nikolai Khabibulin, and though everyone was quick to give the goal to Ryan Whitney, thus ending his goal drought, I was confident it was a tip and he is still going to finish the season with zero goals and sixty assists.  Much to everyone's (everyone but me) surprise, the goal was awarded to Dustin Penner on the tip and Whitney's historic season is still marching forward. 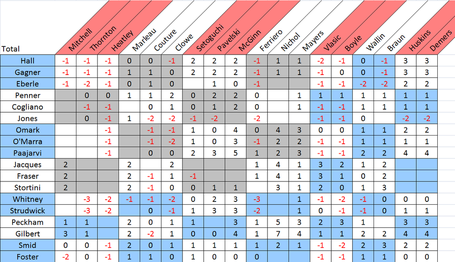 Tom Gilbert and Theo Peckham continued a strong run of play.  Peckham played his typical nasty game, allowed by Gilbert's skating ability and puck movement.  I'm coming around on Peckham, but I believe he needs a partner exactly like Gilbert in order to be effective.  As long as he's got someone to move the puck in a jam, receive the more than occasional bad pass and cover some large spaces when Peckham decides to run someone, Peckham is going to be an effective physical presence.

This team's depth.  It's just a mess.  I realize that they've got $9,000,000 + in salary cap in rehab, but they're icing five rookies in the top nine in addition to Colin Fraser and J.F. Jacques in the top twelve.  Jason Strudwick is on the top pairing.

On a night when the team had a +13 Corsi, and only three guys were in the red, the second worst being Ryan Whitney at -5, Ole Tubthumper, Ryan Jones and his -10 Corsi stick out like a sore thumb.  The Penner - Cogliano - Jones line was a -8 Corsi (rough count) through two periods after which Tom Renney replaced Jones with Paajarvi and the Penner - Cogliano - Paajarvi line was +10 in the third.  I get that he looks like he's trying really hard, what with all of the falls and I know he's become a breakaway specialist, but that can't hide his horrendous scoring chance numbers or his Corsi.  When he's running on the second line of an NHL team, there are real problems.

I'm not sure I understand the point of Ryan O`Marra on the NHL roster.  He's a big, right-handed center capable of winning a faceoff, which he did in the first period.  He won four of five of them as the Oilers won five of twelve draws, in fact. He took four more the rest of the game as the Oilers went 13W 27L over the last two periods.  Colin Fraser had 1W 6L, Dustin Penner 0W 4L, and Sam Gagner had 7W 13L.  Why did Tambellini call up a specialist if Tom Renney is going to watch him rot on the bench?  Do you think that Tambellini and Renney are ever in the same room to discuss these things?