The Rise Of Logan Couture

Share All sharing options for: The Rise Of Logan Couture

When I wrote about Doug Wilson's excellence as a General Manager, I noted that one of his major tendencies was slowly moving prospects through the Sharks development organization:

Wilson has had the luxury of bringing Devin Setoguchi, Ryane Clowe, Joe Pavelski, Torrey Mitchell (before the injury) and now Logan Couture along very slowly, forcing them to earn playing time by proving they belong in the NHL.

Logan Couture was drafted ninth overall in 2007, three selections after the Oilers drafted Sam Gagner.  While the Oilers thrust Gagner into the NHL at the age of eighteen in order to mollify fans after Ryan Smyth, the Sharks kept Couture in the OHL for two seasons.  In short, Couture's development arc is exactly what the Oilogosphere wanted for Sam Gagner.  Gagner wasted his ELC on Oiler teams going nowhere while Couture honed his game outside of the NHL.  Gagner is now playing under his second contract while Couture is in his second year of his ELC.

How the Sharks came to acquire Couture is a story of both serendipity and schadenfreude.  On draft day, 2007, the Maple Leafs traded their first and second round picks in 2007 and a fourth round pick in 2009 to the Sharks for Vesa Toskala and Mark Bell.  Yes, that Vesa Toskala and that Mark Bell.  Doug Wilson traded the Leafs first and second round picks (13 and 44 overall) to the Blues for the ninth pick overall and selected Couture.  From the Leafs perspective, they traded Logan Couture and a fourth round pick for Vesa Toskala and Mark Bell.  While the Leafs would have likely ruined Couture's development, after the jump, we'll see how the slow and steady path to the NHL benefited Couture.

To get a sense of how his numbers would translate to the NHL, we can use Gabriel Desjardins' NHL Equivalency.  Gabe's methodologies are described on his translations page:

One way to evaluate the difficulty of one league relative to another is to examine the relative performance of players who have played in both leagues.  Players rarely play significant time in two leagues in the same year, but they often play in one league in one year and in another the next.  As long as a player’s skill level is approximately constant over this two year period, the ratio of his performance in each league can be used to estimate the relative difficulty of the two leagues.

While his 2010 numbers are buoyed by a (probably) unsustainable 15.6% shooting percentage, it's worth noting Couture's shot generation.  Last season, his first in the AHL, he put three shots on goal per game.  This season, his first full season in the NHL, he's again putting three shots on goal per game.  If he's able to maintain his shot totals, even with a 10% shooting percentage, he'll score 27 goals.

While his early run is impressive and his counting numbers have the mainstream media talking about a Calder Trophy, it was his work in last year's Stanley Cup Playoffs that made him a Copper & Blue favorite.  The Sharks thoroughly dominated the Colorado Avalanche, so not much useful information can be gleaned from looking at Couture's numbers in that series, other than the fact that he, like all of his teammates outclassed the Avs.  But against the Red Wings, the sides were more evenly matched.  Though Couture wasn't playing difficult minutes, and wasn't forced to play against Nicklas Lidstrom, he was doing exactly what someone should do against soft minutes - beating them soundly.  Below is the even strength chances table from the Red Wings series.  Couture had the second-best chances differential of any Sharks skater.

Couture stood out in the Campbell Conference Finals against the Blackhawks.  A look at the head-to-head scoring chances, Couture lost only one battle - to Jonathan Toews. 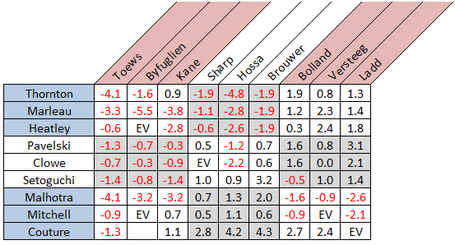 Against the Hawks, he wasn't simply matched against a third line, either. Todd McClellan moved Couture to the Joe Thornton line in Chicago and Thornton started beating the Hossa line, reflected in Couture's head-to-head value versus Marian Hossa.  By the scoring chances, Couture was the top Shark in the series against every Hawk except Toews and Andrew Ladd, and Couture was only 20 years old, in his first NHL playoff run.

He's carried that play over to the 2010 regular season.  A look at San Jose's Corsi shows Couture's relative Corsi as the fourth-best among the Sharks.  He's not benefiting from offensive zonestarts any more than Joe Thornton, Dany Heatley or Ryane Clowe and he's not playing the toughs yet, but Couture is doing exactly what he did in the Wings series - he's creaming the easy minutes.  If the Chicago series is any indication, he's also capable of beating the toughs as a complimentary player, all at the age of 21.

Doug Wilson forced Logan Couture to take the long way to the NHL and because of it, the Sharks have themselves a beauty of a player, capable of beating easy minutes and holding his own against toughs.  He's only in the second year of his ELC and will be a Shark for a very long time, all thanks to the Toronto Maple Leafs.