Share All sharing options for: The NHL Draft Lottery Playoff - Revamping The Draft

Recently, Tyler Dellow published an extremely interesting article about re-thinking the NHL draft structure.  In it, Tyler posits that the league would be better off changing the way the lottery works and allowing the team finishing in 17th place the best chance at winning the lottery and making the first selection:

It strikes me that it might be a much more interesting league if, instead of the best draft pick going to the worst team in the league, it went to the best team that didn’t make the playoffs. Imagine a system where the team with the best record to miss the playoffs picked first, followed by the team with the next best record to miss the playoffs, the 30th place team picked 14th and then the playoff teams picked in the traditional manner. It strikes me that this might not be such a terrible thing, because the incentive to win would always be there.

It's an intriguing thought -- give preference to teams who are actually trying to win.  But, why on earth would the NHL even consider something like this?  Back to Dellow:

In short, this system would reward teams and management that actually get things moving in the right direction, rather than reward those that are completely disastrous.

Remove the incentive to finish in the bottom five and long periods of mismanagement should end.  Create a league where tank jobs, whether purposeful or not, are punished, and every team will try to win.  Giving up on a season would mean giving up on the hopes of a high draft pick.

I was chatting with him about the idea when I was struck with one of my own.  What if the NHL were to hold a single elimination playoff for the fourteen non-playoff teams, awarding the #1 overall pick to the winner of the tournament?  The 17th and 18th overall regular season teams would receive a bye into the second round and the bottom twelve would be seeded according to regular season finishing position.

As Dellow pointed out, last spring's tournament would've been "The Taylor/Tyler Tourney", and the direct path to Taylor Hall was winning, not losing. 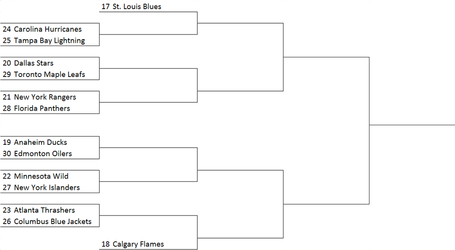 From an owner's perspective, the lottery tournament creates thirteen additional games of a revenue stream for teams that miss out on playoff revenues.  From a management perspective, sell-offs and tear-downs are no longer a path to success - general managers of bad teams will have to find a way to stay competitive.  More competitive teams means more fan interest, so rather than watch interest, television ratings and usually attendance plummet as teams are eliminated from playoff contention, each non-playoff team would have a better chance of captivating fans with a chance at the first overall pick.  Only the Red Wings and Sharks closed the 2009-2010 season stronger than the Rangers, who went 7-1-2 in their last ten games.  Why should a team that finishes strong, but not strong enough to make the playoffs be doubly punished?  A strong finish or a team playing well at the end of the season should have an excellent chance at making a run for the first overall pick in the lottery tournament.

And why not?  Why shouldn't the league give preference to the teams making an attempt to win?  Making each team play for their future means there is little chance that bad management personnel will stay in place for long.  As Tyler noted, "There's something awful about rewarding negative behaviours."  That's exactly what the current draft system does right now.  The Blackhawks were rewarded for their horrendous management with six top ten picks.  The Penguins were rewarded for their terrible mismanagement and bankruptcy with Evgeni Malkin, Jordan Staal, Marc-Andre Fleury and Ryan Whitney, all top five picks.  The NHL is no longer a league where players' rights are owned by a single team for the duration of their career and hasn't been since 1995.  The draft was instituted during a time when the worst teams in the league could only access talent through the draft or via a trade.  Free agency allows each team the opportunity to build outside the draft and field competitive teams without drafting talent.  Why then, should the draft still hold to a pattern designed for a league structure no longer in existence?

There are some logistical concerns, of course.  Last season, the Leafs would've likely tanked in their first game against the Stars because the Bruins had their pick.  But if a lottery tournament were in place, that trade probably doesn't happen until the off-season when picks and season-ending placement is more settled.  Even if the trade was made, the Leafs would have to weigh tanking because of not owning their first round pick, and how much it would damage their later round pick position.

Implementation is easy.  As of today, the 2012 first round is still intact.  None of those picks have been traded yet and eighteen months should be plenty of notice for general managers and teams to adjust to the new rules.

This tournament would also completely re-shape the trade deadline as well.  The bottom fourteen teams would be much less likely to sell off players at the deadline to the top teams if they have to keep them to win the lottery tournament, and that's the point.  The continual rebuilds in Florida, Atlanta and Long Island would be a thing of the past.  Brushing off a bad season as an assessment period would be impossible.  Giving up on season ticket holders can no longer be explained away but a "three-year plan" or an "internal rebuild".  The NHL would become league of competition and winning, because for both non-playoff teams and playoff teams alike, the winning would count.

UPDATE:  As Jonathan Willis notes in the comments below, the KHL already uses this exact format to determine the non-playoff draft order.  So much for originality.