I've watched the Maple Leafs closely twice thus far in 2010 while counting scoring chances against the Florida Panthers.  What I saw in those two games was a team unable to sustain any kind of offensive pressure or break the Panthers game plan.  I didn't expect to see the same against a team playing the second of back-to-back road games and third in four nights.  But what a strange game this one was.  The Maple Leafs dominated the first period wholly and completely.  The whipped the Oilers in possession, zone time, attempted shots, and shots and yet they were down 1-0 at the end of one on a terrible short side goal given up by Jonas Gustavsson.  Even though they pinned the Oilers in the zone and had Nikolai Khabibulin coughing up rebounds left and right, even though the drew two penalties, even though the Oilers defense was lost and scrambling around the zone, the Leafs never capitalized.  The Oilers first period performance was familiar to everyone.  Clearing the puck was a monumental task, stringing passes together was a rarity and the entire team chased the puck around the zone.

The Oilers stabilized the game in the second period and though the Leafs still pressed the play, the Oilers were getting more chances and solid chances.  Taylor Hall scored off of a take away in the neutral zone and a furious charge to the net, capped by a backhand that beat Gustavsson to the short side again.  If Gustavsson is a monster, then Beowulf is going to come along shortly and kill him using the short side of his own net.  Ron Wilson pulled Gustavsson to the delight of the crowd at Pension Plan Puppets and the announcers on LeafsTV and it didn't help.  The announcers lauded his veteran leadership and calming effect in net, but he was coughing up rebounds from the start.  Sam Gagner scored another dirty goal, breaking to the net and banging home a rebound off of a Magnus Paajarvi deflection.

The Oilers put the boots to the Leafs in the third, as Jordan Eberle picked off a pass in the neutral zone, flipped a beautiful saucer pass to Shawn Horcoff breaking into the zone and Horcoff threw a puck at Taylor Hall in front, where Hall used his lob wedge to deflect the puck over Jean-Sebastien Giguere's shoulder for a 4-0 lead.  Ryan Jones scored on a breakaway less than a minute later, though LeafsTV viewers only picked up the play as Jones was releasing the puck.

The win puts the Oilers into 24th in the NHL by P/G and vaults them from 30th in goal differential all the way up to 28th. 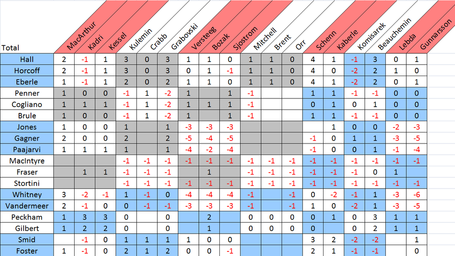 The Hall - Horcoff - Eberle line was outstanding after the first period. Eberle's work in the neutral zone and along the boards has caught my attention lately - he's not strong, but he's sneaky and deft and wins his share of battles, much like Tom GIlbert.  Hall stormed to the net like he was in juniors and Horcoff was managing his own end really well.  They were the de facto first line ahead of the Cogliano line tonight and they won the battle time and time again.

Nikolai Khabibulin was a mess in the first.  Frequent commenter dawgbone was at the game and disagreed with my assessment that Khabibulin was coughing up rebounds - he thought the traffic was hurting Khabibulin.  I watched the first period again and there were a number of clear shots mishandled by Khabibulin.  The problem with rebounds for the Oilers is a defense not suited to handling any kind of sustained pressure.  But after the first period, he settled down, seemed to find the puck faster and smothered it when necessary.  He even came up with a couple of gorgeous saves to keep the Oilers up by two and three through the second period.

Ron Wilson decided to try and get the Nazem Kadri line out against the Andrew Cogliano line from the start, but it didn't work.  Though Cogliano, Dustin Penner and Gilbert Brule were held completely off of the scoresheet, so were Kadri, Phil Kessel and Clarke MacArthur.  The three guys that never seem to click all at the same time played a very strong defensive game and completely limited Kessel at even strength.  For one night at least, they played the shutdown line counterpart for the Horcoff scoring line.

Even though he finished the game +4 and +3, Jim Vandermeer and Ryan Whitney ran around like Timbits players in the first period.  Khabibulin's rebounds weren't helping them, but they weren't helping Khabibulin, either.  They couldn't move the puck out of the zone, even with multiple opportunities and chased so badly at one point I couldn't remember if the Oilers were at even strength or on the penalty kill.  Like the rest of the Oilers, they settled down and played a much more consistent game over the last two periods, but that first period was one of the worst I've seen from an Oilers pairing all year long.

Andrew Cogliano was 1W 7L in the faceoff circle, bringing him down to 41.9% for the season.  He's not taking short-handed faceoffs (he's 5th on the team) and he's not being saddled with an inordinate amount of defensive zone draws.  Dustin Penner and Gilbert Brule take the important faceoffs for him.  I understand he's trying really hard this season, but just put him on the wing and be done with it.  The lessened defensive responsibilities might even perk up his offensive game.  I know he's committed to playing the pivot, but at some point, the experiment must end.

The Ugly
Colton Orr should probably give up the sweet science for awhile.  He's supposed to be the hired knuckles for the Leafs, but he never stood a chance against Steve MacIntyre.  After the beating he received earlier in the season from Deryk Engelland, I wonder why Orr gets playing time at all.  And Leafs fans have two more years of this to look forward to while he soaks up $1,000,000 in cap space.

The Oilers played their third game in four nights and second in a row and Tom Renney managed to give the fourth line only three minutes of ice time in a game that was 3-0 to start the third and ended 5-0.  The team has no depth and when the score is tight, Renney must ride his top two lines and top two pairings home and hope for the best.  On a night ripe for the fourth line to get six to eight shifts in the third period and allow the staff to rest the top nine, the fourth line didn't take a shift in the last half of the game.  There's a huge disconnect between management and the coaching staff right now.  Steve Tambellini feels the need to carry multiple players capable of fighting and throwing a hit now and then and not much more and Tom Renney can't even play them in the midst of a blowout.  Steve, Tom, get your house in order.  If the fourth line is a waste for the season, send them to Oklahoma City and bring up Liam Reddox, Ryan O`Marra and Linus Omark - specialists all, but specialists who fill a glaring need with the big club.  If the fourth line is only going to play three minutes a night no matter the situation, get a set of guys to help the special teams.