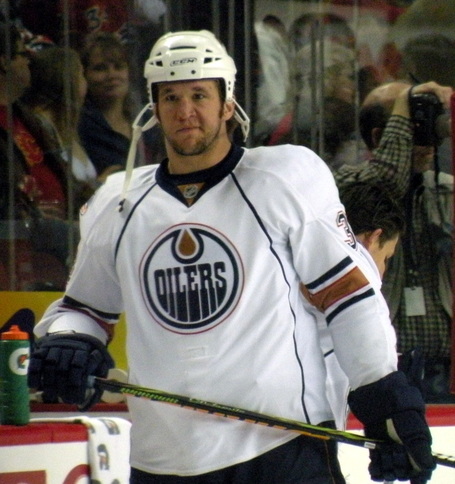 Photo by: Resolute via Wikimedia Commons

I'm going to let you in on a secret: I like hockey fights. I'm an educated, liberal, mostly pacifistic kind of guy, but a couple of hockey players throwing punches at each other gets my adrenalin pumping as much as the next guy's.

The key words there are "hockey players". When, because of some development in the game, two hockey players - that is, men capable skating, puck-handling, and having some impact on the flow of a hockey game - drop their gloves, that's exciting. When two goons fight each other, not because of any development in the game, but because they need to justify their respective presences in the lineup and fighting is the only way that either can even pretend to do so, that's idiotic. I want my fights to be part of the hockey game, not a sideshow to it. Goons don't help a team win games.

At least, that's my take. A lot of people have contrary views. Tom Renney is apparently one of them, which is why the Oilers are now spending a roster spot on Steve MacIntyre. The school of thought that suggests using roster spots on non-hockey players like MacIntyre is, as I understand it, that they're there to protect the skill players: opposing players know that they'd better not mess with Ales Hemsky, or they'll have to answer to Big Steve.

After the jump, I'll start my examination of who's right, me or Tom Renney.

The first question worth answering in this evaluation is the one posed in this post's title: do teams that fight more, win more? Fortunately, that question is pretty easily answered: a team's annual fighting majors are available at hockeyfights.com, and a team's annual points are available at nhl.com. I put these numbers for every team for every year since the lockout (i.e. a total of 150 data points) into an OpenOffice spreadsheet (yeah, I'm poor) and checked how they correlated. Here's the scatterplot: 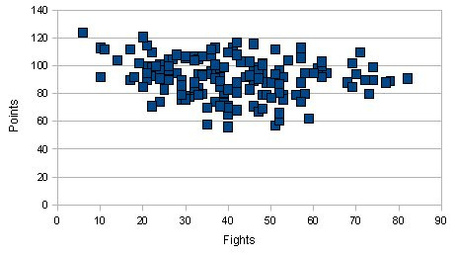 The resulting coefficient? -0.19. It is a hard fact that, on average, teams that have fought more since the lockout have won less, not more.

There are a few reasons that this could be misleading, however. The first is that it doesn't take into account changes in the game since the lockout. As Lisa writes here, the number of fights per season has changed over the years, even since the lockout. There has been a marked increase in fighting since the 2005-2006 season, when teams fought an average of 30.6 times each, to the 2008-2009 season, when they fought an average of 48.6 times each (the figure dipped slightly in 2009-2010, to 47.4 fights per team). The average number of points per team as, not surprisingly, remained pretty much constant, but because of the Bettman Point there's been some change there too.

To adjust for this, instead of looking at a team's absolute number of fights and points, I looked at the percentage from which each of these deviated from the league's average in that year. Here's the resulting scatterplot: 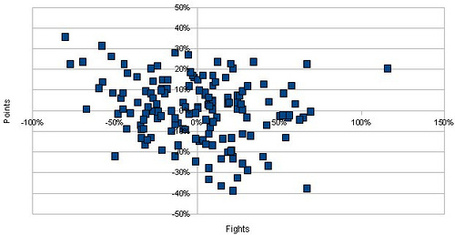 This scatterplot isn't pretty, but it is interesting (at least, I think so). While all four quadrants are populated, the least populated and the least extreme in its values appears to be the lower left quadrant, where are found teams that both fight and win less than the league average. This provides some support to the idea that fighting doesn't lead to winning, but not as much as the correlation of this data does: -0.24.

(For anybody who's wondering about the extreme data points, that one in the upper left is the 2005-2006 Detroit Red Wings, who fought 80% less than the league average and had 36% more points - since the lockout, Detroit has consistently fought far less than the league average and gotten far more points. That far right point is the 2006-2007 Ducks, who were both epically thuggish and highly successful. That one in the bottom right is the 2005-2006 Blues, who would probably have been more comfortable on the MMA circuit than in the NHL.)

Thus far, I've been treating this as being a case of 150 completely separate teams, which of course it isn't: it's thirty teams with five seasons each. Might the data look different if we looked at this on a team by team basis? To find out, I decided to look at teams' change from year to year. That is, when a given team becomes more pugilistic than it was in the previous season, does it generally become more or less successful?

The data I used were a team's absolute deviation from the average in each case. Note that because I'm only working with five years of data, this reduces the number of data points from 150 to 120. Here's what I found: 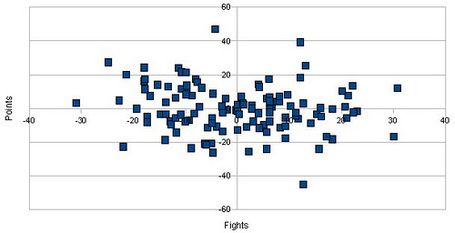 This plot's a little less revealing to the eye than the last one, but it appears to me that the lower left is again underpopulated, which means that most teams that decreased the fighting became more, rather than less, successful. The lower right column looks pretty busy, which implies that teams that fought more than in the previous year generally wound up with fewer points. That's by eye. The correlation is -0.16, which provides more support to the idea that fighting does not lead to team success, but rather the opposite.

What I would dearly love to have done next is compare teams' fighting to their man games lost due to injury, to test the hypothesis that having fighters around leads to fewer injuries. Unfortunately, I'm not aware of anywhere that I can get figures on man games lost due to injury. According to Mirtle, they're available on the league's media website (which raises the question of why they'd do the work of compiling and posting them without making them available for public consumption - media outlets don't pay for access to the media website, do they?), but I obviously don't have access to that. If anyone knows where I can get those numbers, please let me know.

This post has gone to show that teams that fight more, win less. That doesn't settle the debate. First of all, correlation does not imply causation, though I think when you've got correlations this consistently negative that's pretty good evidence that there isn't some positive causation working beneath the surface. Besides that, I set out to test, not whether fighting helped teams win, but whether carrying goons helped teams win. I'll examine that in my next post (due: at some point), but I'd love to have your help: what, statistically, makes a goon? I'll run the numbers using a few different definitions, but my thinking right now is that a definition could incorporate elements like number of fights (this is pretty much essential), weight (we often hear about the need to carry a "super heavyweight" like MacIntyre, rather than a middleweight like Stortini), and time on ice (which seems to me the best indicator of whether a player is there exclusively to fight, or whether he's also there to contribute other things to the game). How do you think "goon" should be defined, statistically? Let me know in the comments.