Share All sharing options for: 2010 NHL Fighting Majors Up From Recent Years

In case you weren't aware, or you simply forgot, it was back in 1922 that the NHL first introduced Rule 56 and thus formally regulated "fisticuffs" as it was called in the official NHL rulebook. With the current version of the NHL rulebook, the rule has been changed to Rule 47 and is now just called fighting even though many hockey fans still use the beloved old term fisticuffs. Just the other day I was reading the Hockey News on the LRT. This is in and of itself not something unheard of, but I read something interesting in one of their articles. Ryan Kennedy has noted that the NHL is currently set to see the most fighting majors since the year before the lockout thanks to records kept with hockeyfights.com. Of course I set off to my laptop to see just how many fights that would be and how it differs from the past couple of years.

Thus far in 2010-2011, there have already been 278 fights and 553 fighting majors. The following table is available directly on hockeyfights.com: (all numbers are current as of December 16, 2010) 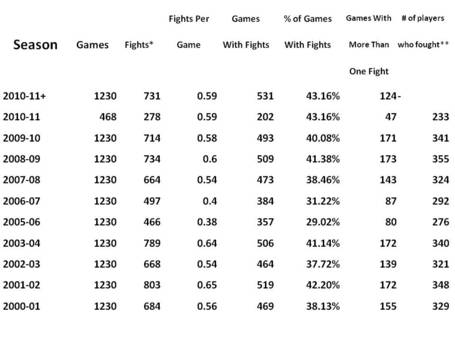 +projections for the year

*A fight is counted when at least one player involved receives a fighting major.

Who are the top teams and individual leaders for fighting majors this year?

You may be wondering where the Oilers rank. Zack Stortini leads the Oilers with 6, which ties many other NHL players for sixth place in terms of fighting majors for the year. As a team the Edmonton Oilers are currently 12th, so in the upper half of the NHL in terms of fighting majors. Thankfully for the Oilers this year, no one has been injured due to a fight. How could Oilers fans forget Sheldon Souray breaking his hand in a fight with Calgary Flames captain Jarome Iginla last year? There was also the fight Steve MacIntyre broke his orbital bone in with Pittsburgh Penguins' Eric Godard on November 6, 2008. It is a realistic concern however, that by fighting in the NHL you will sustain an injury which will take you out of the game, or even worse, the rest of the season.

Often coaches dream of a situation where a third or fourth line grinder would take a top player from the opposing team out of the game for five minutes and sometimes this happens. Why even Sidney Crosby and Alexander Ovechkin have both been involved in fights this year. Some fights have transpired when their respective team was ahead on the scoreboard, but not always. When Crosby fought Dallas Stars' Matt Niskanen on November 3rd, the Penguins were behind and went on to lose the game 5-2.

Overall, do fights positively influence the outcome of the game? Not according to Kevin Baumer of the Business Insider's Sports Page. Baumer concludes that teams lose more games when their enforcers fight, which is in some ways surprising. It's true that it is not always two enforcers facing off with each other, but it does happen from time to time so even though one enforcer's team loses, the other's wins. These arguements do have merit however, perhaps fighting does cause a loss more often than a win.

So, we see that the fighting majors have been handed out with increased frequency this year. Why is that? There is no prize for the most fights of the year, rather the opposite with the Lady Byng Memorial Trophy for the best sportsman like behaviour. Why is fighting more popular this year? Looking at the teams that have received the most fighting majors penalties you can't even conclude that they are the teams that are the most likely candidates for the Stanley Cup, or the teams that are at the bottom of the standings and thus need the wins the most.

The conclusion I draw from what I am seeing during NHL games is that the cultural demand for immediate retribution that many players and teams feel they need is increasing since the return from the lockout. Fights and fighting majors did appear to be on the rise going into the lockout, and now the trend is continuing once again. Perhaps players were unsure how far to push the rules or their opposition after playing in other leagues or not playing for a year, and have now become more accustomed to being back in play. Or, maybe with the new head shot rules, players feel the need to drop the gloves to send messages rather than with hard hits into the boards at times. There is of course still the entertainment factor. Fans love hockey fights. If they didn't why would Don Cherry and his Rock em Sock em still be so popular? Why would the most memorable scenes from the movie Slapshot be fights? I'm not suggesting that the NHL would go so far as to recommend to teams that they promote fighting, but I don't think that the NHL would ever step in and tell teams to take the number of fights down.

As you can see, there really isn't a pattern to the Oilers' number of fights. We can try to argue that fights this year may be due more to the fact that the team consists of so many highly skilled rookies, and that the team has more enforcers, agitators or fighters. However, the Oilers tend to be in the upper half of the league in terms of fights, so that argument may not actually be valid. I find it interesting that the Oilers had the fewest fights, of recent years, the year of the cup run.

No matter the reason, overall throughout the league fights and fighting majors are on the rise. What will be interesting to see will be the number of serious injuries incurred due to fighting, and do fights involving enforcers cause more losses or wins at the end of the game.