As I mentioned in my gift ideas for your Edmonton fan column, Cisco Systems' Flip HD and the NHL have partnered to offer NHL-branded Flip HD cameras.  As part of the promotion, Flip is giving away a trip to the NHL All-Star game - find the details in the Flip press release at the end of this post.  The Flip marketing staff contacted us with the offer of a promotional camera for testing and review.

We were supplied with a MinoHD™ 4GB model, which came in a small black box and reminded my wife of jewelry, so imagine her disappointment when she opened it and saw an Oilers logo.  Each camera comes with a built-in USB sliding arm that plugs directly into a USB port for downloading.  Video is recorded as 16:9 widescreen, HD 720p (1280 x 720) at 30 frames per seconds (fps) progressive scan and recorded as MP4 files.  Video can be played to a television or monitor directly from the device via an HDMI cable.  The model we used for this review retails on the Flip website for $179 U.S. and comes with free 2-Day Shipping.

The Flip is so easy to use that my five-year-old was able to power it on and film without receiving instructions.  He's also able to zoom in and pan out, start and stop recording on his own.  It took him all of two or three minutes to learn how to use it. The Flip comes with a lanyard, a carrying case and a set of fold-out instructions - that's it.  Below is our Flip, just out of the box. 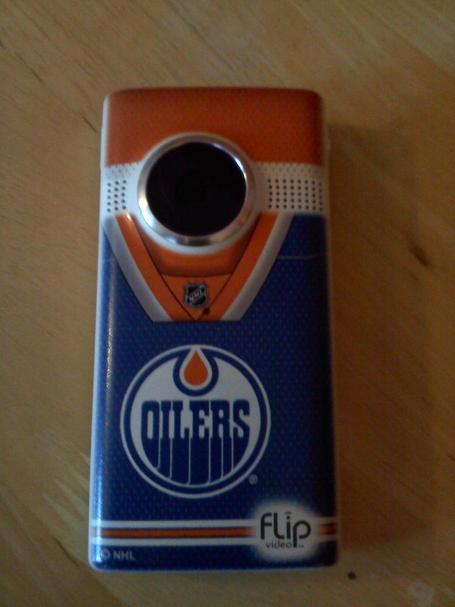 After charging the camera for five hours prior to the first use, as per the manufacturer's recommendations, we were recording HD video inside of two minutes, without looking at the instructions.  It's point and shoot with a touch zoom button.

Matt Wagner at The Cannon used a quarter as a size comparison to show just how small the Flip HD is.  In his photos, you can see the bottom of the camera which has a small tripod mount.  He also filmed some footage of Blue Jackets' practice to give you an idea of the quality of the video.  Travis at Broad Street Hockey used his Flip to film locker room interviews after a Flyers game.  The quality is amazing for such a small device, especially for personal video.

Transferring video is easy - simply plug the device into any USB 2.0 port and drag and drop.  Windows and Mac users will be asked to install Flip's proprietary video management software FlipShare, which allows users to share videos to Youtube, Facebook and Twitter through the interface, as well as make and edit movies and take stills from recordings.  There are also options to create video greeting cards and personal video e-mails and create a Flip Channel, essentially an online library for your videos which allows users to grant access to friends and relatives.  The Flip also installs itself as a storage drive on your Windows-based computer and Windows Explorer allows you to drag and drop files from the camera to your computer.

I mentioned the built-in USB swing arm - it's used for transferring video as well as charging the Flip through the USB 2.0 port.  Battery life is excellent, as my wife and kids tested the camera, filming an hour of footage, the entire 4 GB, and the battery still indicated just below half of a charge remaining.  Below is a picture of the Mino with the swing arm exposed. 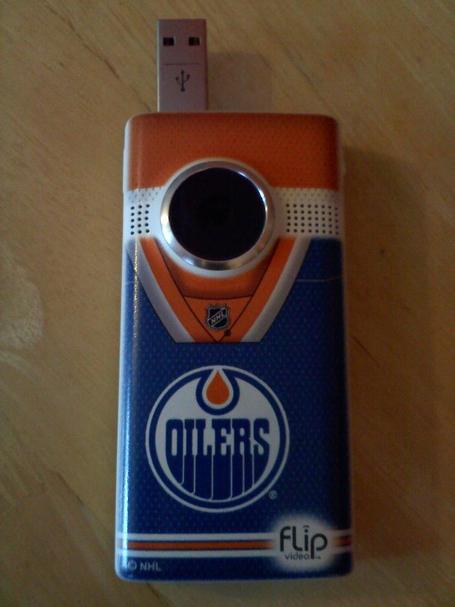 Overall, I have only two issues with the camera.  Though the camera comes with a microfiber carrying case, it's lightweight and doesn't offer much protection.  The Flip is pocket sized and can easily fit into your front pocket, or a small purse for the ladies, but carrying it around left me worried about damaging the lens or the or the viewer.  The other concern is the lens.  There is no protection for the lens whatsoever.  The camera does not have a lens cover and the lens actually protrudes a few millimeters out from the body of the camera, so if you do catch or bump the phone, the lens is a prime target for damage.

Overall, The MinoHD is a fantastic gift for any family with a couple of Edmonton fans or for anyone looking for an easy-to-use device for shooting personal video.  Make sure you find some kind of protective carrying case if you're buying one of these for someone less careful than normal.

Below is the press release detailing the trip to the NHL All-Star game.

CISCO AND THE NHL TEAM UP TO OFFER

SAN FRANCISCO, Calif. - December 7, 2010 - One of hockey's most iconic phrases - "he shoots, he scores" may soon be replaced by "he shoots, he shares" - as Cisco's Flip VideoTM,  and the National Hockey League® (NHL) team up to offer 30 uniquely designed NHL team Flip video cameras.  In addition, Flip Video will offer Facebook fans a chance to win Flip cameras and a trip to the 2011 NHL All-Star Game presented by Discover. Select NHL.com reporters will also receive NHL-branded Flip video cameras to capture all the hockey action on and off the ice.

Beginning December 7, fans can choose their own official NHL Flip video camera with a custom design from any one of the 30 NHL teams from the U.S. and Canada.  A perfect gift for hockey lovers, the new Flip designs are available through the Flip Video online store: theflip.com/NHL. The NHL-branded Flips will be offered on all of the latest Flip video cameras including the Flip UltraHD, MinoHD and SlideHD*, starting at $149, for anytime shoot and share fun.

Edmonton Oilers right wing Jordan Eberle and Pittsburgh Penguins center Evgeni Malkin are among the many celebrities and sports icons featured in the Flip Video 2010 holiday campaign ‘Do You Flip?'

"Flip is the only video camera on the market that consumers can customize and select from thousands of unique designs. Our ability to offer customization has enabled us to team with the NBA and now the NHL, which was a natural extension for our brand," said Jodi Lipe, director of marketing for Cisco's Consumer Products. "Whether it's at the Stanley Cup Final or an afternoon snowball fight with friends, Flip video cameras are a fun and simple way to capture and share videos with friends and family."

"Hockey fans are in a class of their own when it comes to diehard loyalty," said Dave McCarthy, NHL Vice President Integrated Marketing. "Owning a Flip video camera representing their favorite team is a great way for fans to show support and more importantly have fun sharing their passion with fellow hockey fans and friends around the world."

To help promote the new NHL designs, Flip is hosting a contest called the Flip Video Fan Face-off that will give away one grand prize trip for two to the 2011 NHL All-Star Game in Raleigh, North Carolina, January 30, as well as daily prizes of NHL-custom designed team Flips every day in December.  Hockey fans can face-off for these cool prizes starting on December 9, 2010 at www.facebook.com/flipvideo.

Flip Video is the only video camera line to feature official designs from the NHL and all 30 NHL teams so fans can show their affinity for their favorite NHL team while shooting and sharing  video with others at games, parties or events. Flip video cameras make it easy to share video via email, FacebookTM, YouTubeTM, TwitterTM and even on a TV.

Cisco is also equipping the team of 20 NHL.com reporters with their own NHL logo Flip video camera to use as they travel to NHL games around the U.S. and Canada. With their official NHL Flips, the on-the-scene reporters will be able to greatly enhance their coverage by capturing video footage to post to the NHL.com web site.

All NHL team designs are available at www.theflip.com/NHL starting today at $149.

Cisco (NASDAQ: CSCO) is the worldwide leader in networking that transforms how people connect, communicate and collaborate. This year celebrates 25 years of technology innovation, operational excellence and corporate social responsibility. Cisco's vision for the consumer is to enable people to live a connected life that is more personal, more social, and more visual. Further information about Cisco and its full line of consumer products including Linksys, Valet and Flip Video can be found at www.theflip.com, http://home.cisco.com and www.cisco.com/consumer.

The National Hockey League, founded in 1917, is the second-oldest of the four major professional team sports leagues in North America.  Today, the NHL consists of 30 Member Clubs, each reflecting the League's international makeup, with players from more than 20 countries represented on team rosters. According to a Simmons Market Research study, NHL fans are younger, more educated, more affluent, and access content through digital means more than any other major professional sport. The NHL entertains more than 250 million fans each season in-arena and through its partners in national television (VERSUS, NBC, TSN, CBC, RDS, RIS, ESPN America, ASN and NHL NetworkTM) and radio (NHL RadioTM, Sirius XM Satellite Radio and XM Canada).  Through the NHL Foundation, the League's charitable arm, the NHL raises money and awareness for Hockey Fights CancerTM and NHL Youth Development, and supports the charitable efforts of NHL players. For more information on the NHL, log on to NHL.com

*The SlideHD is only offered in the United States.

Cisco, the Cisco Logo, Flip Video and Flip Video Logo are  trademarks or registered trademarks of Cisco Systems, Inc. and/or its affiliates in the U.S. and other countries. A listing of Cisco's trademarks can be found at www.cisco.com/go/trademarks. Third-party trademarks mentioned are the property of their respective owners. The use of the word partner does not imply a partnership relationship between Cisco and any other company.

NHL, the NHL Shield and the word mark and image of the Stanley Cup are registered trademarks of the National Hockey League.  NHL and NHL team marks are the property of the NHL and its teams.  All Rights Reserved.

*Disclaimer - The Copper & Blue was given a promotional camera for use in exchange for this review.