Weekend Update: Oilers' Fans, Where Are You?

Share All sharing options for: Weekend Update: Oilers' Fans, Where Are You?

This week in Oil Country, if you can still call it that... You see, Derek Zona brought up a good point from the crushing defeat Sunday night's game against the Canucks in Rexall Place; too many visible opposition fans in the crowd on TV. The same thing was observed in the embarrassing loss to the Leafs on Tuesday. Where are Oilers fans these days? I do agree that it's hard to tell exactly which Oilers team will be dressed be it the ELPH (exciting last place hockey) team, the HOPE (push for the playoffs) team, or the "I should be in the AHL" team. Sorry, I have no clever acronym for that last one maybe soon depending on how the ups and downs of the season transpire. No matter, Oilers fans in Rexall Place we want to see you when we watch at home.

Speaking of our AHL team, Jeff Deslauriers has been named to Hockey Canada's Spengler Cup team. This year, the team will be coached by Oilers' alumni Mark Messier with assistant coaches Doug Shedden and another ex-Oiler coach Bill Moores. Deslauriers has been having anything but a career year this year. It is interesting to see the young netminder take time off during the AHL season to travel to Europe and play for Canada in the Swiss tournament.I hope that this is a chance for Deslauriers to find his bearings, release some of the stress he must be feeling and find his game again. Deslauriers might end up being a career AHLer, but that doesn't mean that he doesn't have aspirations for something more, or even being one of the best in the AHL. It all boils down to Deslauriers himself however, we'll have to wait and see how he finishes out his year and contract. Deslauriers' agent will likely already be looking into other teams in both the NHL and the AHL.

Linus Omark was the talk of the town due to his spin-o-rama at centre ice prior to scoring the winning shootout goal last Friday at Rexall against the Tampa Bay Lightning. Then, what happened to him? Many fans, including me wondered where he went and why he didn't even touch the puck on Sunday's game against Vancouver. Omark was also missing from Wednesday's game against the Leafs, but thankfully Omark made his way to the rink on Thursday. Scoring the first goal of the night, and his first NHL goal, Oilers fans breathed a collective sigh of relief. So far what do we know of Omark? The kid can score amazing goals in the shootout, and has been a scoring machine for the Barons even netting 5 goals in a single night plus a shootout winner in a game against the Toronto Marlies. Many Oilers' fans can't help it though, and worry that we may have another Rob Schremp situation on our hands. Seeing Omark score and have an effect of the play of the game Thursday puts the "oh" back in HOPE.

Omark wasn't the only Oiler to score on Thursday night far from it really. With a final score of 6-3, Jordan Eberle found the back of the net twice and Magnus Paajarvi scored once to show the world that these rookies are starting to gel, there may be some chemistry there after all. You already knew that though, didn't you? Another point of interest from this game, the Oilers are the only team this season to have scoring from three rookies in a single game this year.

Injury news for the Oilers, Jim Vandermeer was injured in Sunday night's game. Was it through a bone shattering hit? No. A courageous shot block? Nope. Vandermeer had his skate caught in a rut on the ice. Thankfully the injury doesn't look as bad as the similar injury that happened to Matt Greene in 2007, causing Greene to need surgery to repair his ankle with a metal plate and take three months off of the season. As Vandermeer did not require surgery we hope to see him back in the lineup in the new year.

The game against the Vancouver Canucks was painful in a few ways, the shot count was a large part of the hurting. Through the entire game, the Oilers had 12 shots. The funny thing is that originally the Oilers were only credited with 11, until the team insisted that those numbers be checked again. What was so significant about getting credited for the other shot? The Oilers were able to avoid tying the franchise all time low shot count for a game of 11, set back on November 5th, 1999 against the St. Louis Blues. Shockingly enough, that game was a loss also.

Edmonton Oilers' prospects Olivier Roy and Curtis Hamilton have made Team Canada for this year's World Juniors comptetition. Last year, team Canada lost to the USA, and through that loss didn't acheive a six straight year gold medal winning streak. This year, the hope for a new streak begins again.

The Oilers' Octane group made their debut on Tuesday night with a 60 second performance at each of the entrances to the 200 sections. Reactions were mixed. There are many out there that think that this is great, that the dance squad will add to the enjoyment of the game, there are those that are indifferent, and those like me who feel that this is ridiculous. If I am to believe that the Oilers are having a hard time making a profit due to profit sharing, why do I want to see them spend more money on a dance team? I don't want to pay more for every ticket to see a game in Rexall either because I am getting the added entertainment of these dancers. You know what I find the most impressive about dancers and cheerleaders at football games? How they all dance in unison and the flips and cartwheels, all of the athletic displays they put on. How are these Octane girls to do anything like that at Rexall? They certainly cannot take out seating anywhere in Rexall so that the girls can have a dance stage similar to the one in the American Airlines Centre in Dallas Texas, so then what? Yes, there is the opportunity to put out mats on the ice and have them dance there, but that just takes away from the more community minded fan games, or even better the peewee hockey games that we can see during intermissions. The memories that these young kids must take and hold with them, playing on the same ice as their heroes, and on the same night! Plans have not been made public just what the team plans to do with the Octane crew besides charitable appearances and the occasional dances in Rexall, we'll just have to wait and see what those will be. 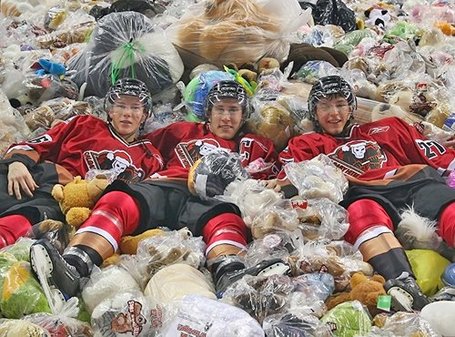 The Oil Kings sadly saw the end of their 5 game winning streak that included a 9-3 Monday night win against Regina on Monday, and a Wednesday night 3-1 win over the Swift Current Broncos with a shut out loss to the Chilliwack Bruins last night. This is even more depressing as it was indeed the teddy bear toss for the Edmonton Oil Kings. Fans had to wait out the 60 minutes of game time waiting and hoping for an Oil Kings goal so that they could throw their stuffed animals onto the ice. I'm waiting on details, but I'm sure that fans still threw the toy donations to the ice at the end of the game.

In NHL news, the Pittsburgh Penguins winning streak was snapped on Wednesday due to a loss against the Philadelphia Flyers which has extended to a two game losing streak thanks to the New York Rangers. Sidney Crosby however, has extended his point streak to an impressive 20 games. I have been forced to re-think and start to change my opinions on Crosby due to his past couple of seasons. No longer is Crosby the diving, crying player that some hockey fans may have imagined him to be.

Edmonton's favourite hated ex-Oiler is expected to be out 4-6 weeks with a broken foot. Yes, Chris Pronger is to undergo foot surgery due to an injury incurred on Wednesday night against the Montreal Canadiens. Although Pronger is in the Eastern Conference and the Oilers don't play the Flyers very often, I know that some Oilers' fans still take pride in knowing that Pronger isn't on the ice.

Remember when the Oilers had had to sign University of Alberta Golden Bears goalie Aaron Sorochan to a one day amateur try out contract to be a backup goalie? Well in Phoenix this week, the Coyotes were in a similar situation amongst all of their ownership concerns. The Coyotes signed a grad student to be their backup for a night. The ownership concerns, well the City council of Glendale voted to continue putting money into the struggling NHL team. Attendance is low, revenues are non-existant and a potential new owner from Chicago has stepped up. This deal is quite interesting though, Hulsizer isn't out right buying the team, but rather buying the team by installments and with a clause allowing Hulsizer to step away from the deal. The team may have new ownership, but the problems facing the team are the same. I doubt this will be the final chapter in this saga, and five to ten years from now I don't see the Coyotes in Phoenix or the NHL going this far to find money for struggling markets. This is sad for the city of Glendale who still has 23 years left to pay on their arena complex.

The Atlanta Thrashers have put their mascot in jail. Why? They are trying to promote ticket sales. The mascot was placed a cell following his theft of a zamboni Thursday to remain until the team sells 5000 tickets for the remaining December games. It is an interesting idea and hopefully this will not be a life sentence for the poor kid in the suit. Who wants to spend Christmas in jail?

Quebec Nordique Fans flocked to Long Island last Saturday with a message for the NHL, the Islanders are suffering and can't seem to sustain a fan base, while there are cities that would love to have a team. The Islanders made news for other reasons this week though too. While visiting hospitals for the holiday season, members of the Islanders team were heckled by ticket holders. So, the pain goes deeper than being last place for the New York Islanders.

The NHL invaded the Price is Right this past week for an episode that will air on December 20th. Jeremy Roenick was by far the best on camera, while Alexander Ovechkin and Sidney Crosby looked less than impressed or excited to be featured. Also, it was pretty sad that such a great package was up for a young woman who didn't seem to know what was going on, or really what the package was for. Once she realized that the package was for an outdoor hockey game in January, in Pittsburgh I think she was looking for the exits. We'll have to wait to find out if Lauren won her showcase, or whether if was the other guy.

The Sequence of the Most Pain - Cult of Hockey Staples

Is It Time To Trade Ales Hemsky? - Copper & Blue SumOil