Every once in a while the Oilers score six goals.  It just so happens that every other time they do it, they're playing against the Columbus Blue Jackets.  Typically, the Jackets play pylon and shooter tutor to Ales Hemsky's flying circus - Hemsky has scored more points per game against the Jackets, 32 points in 24 games played, than against any other NHL team.  It follows then that Coach Scott Arniel must have felt extremely confident that he wouldn't have to face Hemsky or Shawn Horcoff tonight.  Unfortunately, if Arniel was confident, it was because he forgot his franchise goaltender stinks.

I should feel badly, or at least some form of empathy, for the Jackets.  They've been victimized by terribly poor management for far too long.  Bad goaltending got a coach fired.  The coach had took a star player to task in the media.  They've made some poor first round picks.  They picked up Ethan Moreau when no other team in the league wanted his "bonus year".  They even hired Scott Howson to make the obtuse recognize the similarities between he Oilers and the Jackets.  On the other hand, the Jackets gave Steve Mason $2,900,000 per year for two years, an obscene amount of money for a goalie with 119 games played and a save percentage beginning with .90.  And it was that goaltender that cost them the game this evening.

The Jackets came out and absolutely dominated the game.  They outshot the Oilers 23-13 in the first, posted a +11 Corsi, and dominated the scoring chances 18-8, yet they trailed 3-2 because Steve Mason morphed into Stevebob Sievepants.  Mason allowed Linus Omark to make an NHL 94-like move - shooting the puck on net from straight on in order to get the rebound and flip it around the goalie - and then almost purposefully opened the five hole wider to ensure Jordan Eberle couldn't miss getting the lead back for the Oilers.  Meanwhile, the Oilers were doing their best to ignore Kristian Huselius and Huselius kept tying the game.  Dustin Penner was the beneficiary of some extremely hard work by Magnus Paajarvi in behind the net on the power play and Columbus looked set to pull Mason after one.

Arniel stuck with Mason to start the second period and watched as the rest of the team imploded around the struggling goaltender.  The Oilers outshot the Jackets 14-6 and outchanced them 11-5 in the second and put the game away.  Eberle deflected a Ryan Whitney shot into the net to make it 4-2, Magnus Pajaarvi got the easy put away off of a Linus Omark shot and Sam Gagner buried a turning shot from the slot to make it 6-2.  The rout was on, and for once, it wasn't the Oilers being routed and it wasn't the Oilers getting AHL-level goaltending from their overpaid starter. 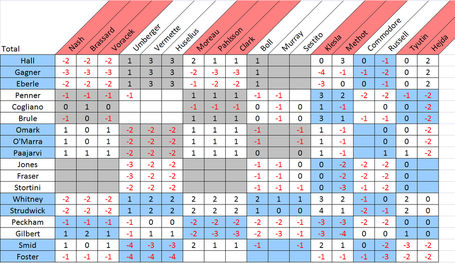 Even though they were matched against Antoine Vermette and the Marc Methot / Rusty Klesla pairing, Jordan Eberle, Sam Gagner and Taylor Hall were generating offense all night.  They were giving it back in their own end, but a line that young is going to do that against even weak competition.

Magnus Paajarvi had the benefit of playing against Ethan Moreau for most of the game, so his results must be somewhat tempered.  But he was on the puck most of the night, winning battles and skating hard.  His work behind the net leading up to the Penner goal was fantastic.  Digging away behind the net like that, he looked like a kid with three years of experience playing against grown men in a professional league.

Ryan Whitney may have put on one of the best performances by a defenseman in the history of the Edmonton Oilers.  He had two assists and three shots on goal.  He was a +4 on five even strength goals.  He was on the ice for five of Edmonton's six goals and none of Columbus' three goals.  He did all of this while paired with Jason Strudwick.

The fourth line had one of their worst games of the year, and that's saying something for a troika who have been painful to watch at times this season.  Colin Fraser finally won a couple of faceoffs (7W 3L), but that was about all he did well.  His coverage on Huselius' power play goal was terrible and at even strength, he was just as bad.  He posted a -7 Corsi in  7:00 of ice time and had one chance for, trumped by his four chances against.

The penalty kill was up to their old tricks again and this time it wasn't Nikolai Khabibulin's fault.  The aggressive diamond led to a three-on-one situation with R.J. Umberger, Huselius and Kris Russell in the slot or below against Theo Peckham.  Tom Gilbert was off diamonding in the corner and Dustin Penner was late diamonding through the slot, leaving both Peckham and Khabibulin completely diamonded.  Huselius got the Burrows-like tap in.

I've talked about this a couple of times already, but the linesmen in tonight's game had a terrible go of it trying to stop the Zack Stortini - Toim Sestito fight.  After a quick exchange, Stortini ended up on the ground and the linesmen made a half-hearted effort to stop the battle.  Once the hired knuckles were back on their feet, however, the linesmen hung around, reaching into the fight, trying to hold the two big men back and at one point after they stepped back, one of the linesmen actually reached out to grab Zack Stortini's arm.  While he was fighting.  These fights are dangerous enough, Toim Sestito didn't need help from the referees.  If this continues, either a linesman is going to get hurt or their are going to set up a fighter for a career-ending shot to the face by holding him or preventing him from protecting himself.