This is Ryan Murphy. He must be a disheartened man today. He was among the final cuts made from the Canadian World Juniors Selection Camp. He played his heart out and even Bob McKenzie was half-expecting Murphy to make the team and for good reason: he is one of the most talked about defensemen among this year's draft eligible prospects. He is an explosive skater, a very good puck mover and has that 'vision' everyone raves about. The only knock on him is that he is small and sometimes it puts him at a disadvantage while playing defense. If you ask his fans, they will tell you that he has improved and is no longer the defensive liability that he was initially made out to be. However, he should take this cut in stride and go on to dominate the OHL scoring race.

The World Junior selection camp ended today and the last cuts were made today morning. While none of the cuts were questionable, some were disheartening. Along with Murphy, Riley Sheahan and Calvin Pickard. Pickard is the best goalie in the Whl, heck he might even be the best goalie in the entire CHL, but whenever it comes time to play in a tournament he falters. He did not play well in the U-18 before the draft and even in the camp he was terrible. Ryan Hopkins being cut is not really surprising. He is only 17 and was the youngest forward in the camp. I dont think he is at the same level as Matt Duchene or Tyler Seguin, but they did not make the World Junior team in their draft year either.

More on the WJC team and cuts after the jump following the CHL updates.

As usual, ZPG is Zero point games. Players in black are draft prospects for the upcoming draft. Players in copper are Oiler prospects. Players in red are 1st round draft picks from previous draft and those in blue were drafted in 2009. The stats are from the games played from 1st December to 14th December. 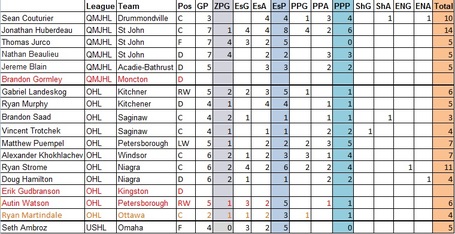 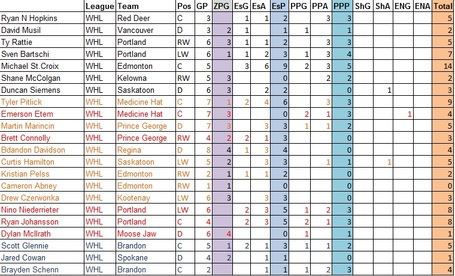 Let me sign off by saying: In the last 3 World Junior Championship, the eventual 1st overall pick has been on Team Canada!