Watch out Long Island.  Your number one overall pick isn't sewn up yet, not if Nikolai Khabibulin, Jason Strudwick and Tom Renney have anything to say about it.  Every time I think Tom Renney has figured this bench management thing out, he turns into Jackson Pollack in a Slurrystore.  Devan Dubnyk is playing like best goal of his professional career and every time he gives the team a chance to win, Renney comes right back with Khabibulin.  It's like a modern-day Little Albert Experiment.  Jim Vandermeer is hurt, so Jason Strudwick draws the tough assignments.  Shackleton would've eaten Strudwick rather than ask him to pull the sleds on the slushy ice.  The penalty kill still looks like Attica.

I was going to give this article the ol' "Leafs 3 - Oilers 1 - Strudwick 1" headline, but I'm tired of these efforts.  Does anyone else miss Marty Reasoner?  Jarret Stoll?  Kyle Brodziak? 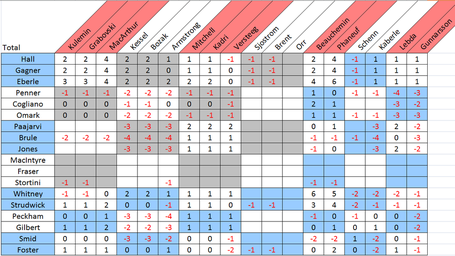 The Good
There wasn't much here, but Taylor Hall firing puck after puck on net, taking everything the Leafs could throw at him and still coming at them all night long was inspiring to watch.  Bob Stauffer needs to slow his roll and stop with the Messier comparisons, but Hall is finding his stride.  Hall, Sam Gagner and Jordan Eberle were rolling tonight and the Leafs had nothing for it, especially their top two lines.  If this line can give 85% of what they had tonight during each game, Renney might have Penner - Horcoff - Hemsky to use as a power line (Renney use a power line and match? Yeah, right!)...in four months.

Dustin Penner and Linus Omark combined to hold the puck in the zone for 1:03 against the Leafs and looked great at other times.  But Penner can't carry two defensively inept forwards against first and second toughs, no matter how poor of an opponent they face.  Maybe Penner - Horcoff - Omark will be a nice line...in four months.

The other stuff in between.  Andrew Cogliano's complete lack of defense awareness is getting old.  He's going to cross 300 games played in mid-February and he still has no idea what he's doing in any zone.  If he had injury issues, it would be understandable.  If he were brain damaged, we could excuse it.  But for a kid with all of the physical tools and skills - he should at least be a skilled version of Pascal Dupuis.  Instead, the Oilers have themselves Fabian Brunnstrom.

Just when you've had your fill of small, lost forwards, Cogliano leaves the ice and Gilbert Brule jumps on.  It's nightmare midget wrestling.  In what has become all too common of an occurrence, Brule was torched repeatedly tonight.  His season is shockingly bad:  68 CF - 111 CA.  The only Oilers worse than him by the chances percentage metric are Zack Stortini, Ryan Jones and Colin Fraser.  The fall was expected, but I don't think anyone expected Brule to walk into the Afar Depression, though he did draft off of Penner to snag a multi-year deal.  The dearth of real NHL players kills this team.  Just to recap, by the way:

You know, I hate to harp on a fellow, but Jason Strudwick does not belong on an NHL roster.  He didn't belong on a roster last season, or the season before.  He's not made from French grapes, so he's certainly not getting better with age.  Rather, he's rotting. He scored an own goal on what can only be described as a drunken monkey spin kick.  He watched at the point as the puck came out of the zone, then jumped on it and threw it back into the offensive zone, rather than hold the puck in.  It's a mess.  After learning of Vandermeer's injury, I told a friend "There's no way I'll make it through another year of watching Jason Strudwick on the ice."  And I won't.  I'll stop watching and just paste hate mail from Vancouver and Colorado fans as the post game write ups if I have to watch Strudwick all season.  We get it, he's a loyal dog.  But sometimes you have to send the dog off to "that farm in the country".

You're absolutely killing us, Tom.  Not only did you take the team's worst player and put him on the first pairing with Ryan Whitney, you decided to let him play some toughs.  The Oilers were the home team with the last change, but by Renney's line matching, someone reading the shift charts would have little idea.  Renney sent Strudwick over the boards to match Kessel on an own-zone faceof.  Renney sent Strudwick over the boards to play Toronto's top line.  His worst sine of the evening was sending Steve MacIntyre out for a shift immediately after the Zack Stortini / Colton Orr fight.  The only Maple Leaf MacIntyre can fight is sitting in the penalty box, Renney has the final change so he sees the Kessel line on the ice and he STILL sends MacIntyre out.  It's the NHL, everyone knows what happens when you put a goon on the ice against a non-goon - the stripes watch the goon until he does something questionable, then sits him in the penalty box.  This is basic stuff and it's killing the team.

This stuff has to end.  Fix it.