If you are a season ticket holder for the Edmonton Oilers and you gave or sold your tickets to a Vancouver fan for tonight's game, you deserve to lose your seats for all future Edmonton sporting and cultural events for the rest of your existence.  The amount of Vancouver fans in the first three rows behind each goaltender was an embarrassment.  That they were able to stop talking into their Bluetooth long enough to put together a number of chants for Luongo louder than anything Oiler fans put together in the first or second period was an abomination.  Do you want to know who else allows the opposing team to outnumber the home team?  The Blue Jackets, Panthers, Thrashers, Hurricanes and Islanders.  If you're a fan dead set on giving your tickets to the opponent's fans, move to Miami or Columbus - tickets are less expensive there.

If you have seats next to someone that allowed Canucks fans into the arena - I'd ask you to read those people the riot act, but I have a feeling those same "fans" are going to give their tickets to Leafs fans.  If they don't and they actually show up - pile it on.

Yes, there was a game this evening.  The game went exactly as the matchups said it would - an undermanned team, short two of it's three real NHL forwards was manhandled by a team considered the favorite to win the division.  The Oilers were a one line team through two periods - only Magnus Paajarvi - Andrew Cogliano - Dustin Penner were able to skate with or outplay the Canucks to any degree.  They had one shot on goal in the third period and it came with five seconds to go in the game.  There's nothing Tom Renney can do at this point though, he's got no options at forward, none at defense.  Steve MacIntyre, J.F. Jacques and Jason Strudwick continue to soak up roster spots and comprise the worst bench in the league. 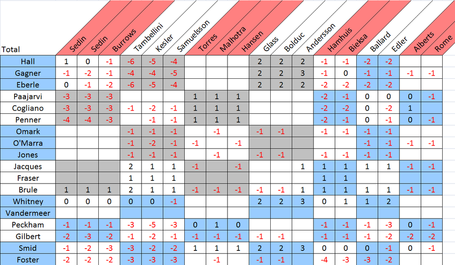 Devan Dubnyk was masterful tonight.  He gave up two goals on thirty-two shots, and did not have a chance on either goal as both were tap-ins.  Behind a team able to generate any offense, Dubnyk may have stolen a win tonight.

Tom Gilbert played a very solid game.  He, more than any other defender cycled between defensive partners, and did an excellent job in his own end, making a number of smart plays and chose to carry the puck out of the zone rather than attempt some dangerous passes against a tough Vancouver forecheck.

Kurtis Foster is essentially a power play specialist at this point.  When he's playing third minutes, he can hold his own.  When asked to take on more responsibility, his game falls apart.  Tonight was one of those nights.  Once Jim Vandermeer went down with the ankle injury, Foster was be cycled through top four minutes occasionally and it showed.  He played 13:27 at even strength, three minutes less than any of the other healthy defenders, but was on the ice for ten shots against.  He was on the ice for ten of Vancouver's twenty four shots and was on the ice for zero chances for and six chances against.

During the sequence leading up to the second Vancouver goal, Andrew Cogliano played what can only be described as putrid positional hockey on the penalty kill.  First he allowed Alex Edler to walk in behind him for the back door pass and only a blocker save by Dubnyk saved a goal.  Cogliano was neither aware of the man, nor the possibility of the pass so he made no effort to cut off the lane or move to the man.  After the miss, the puck went to the near sidewall, where a battle ensued.  Cogliano backed off of the battle to cover the centering pass, then watched Ryan Kesler walk off of the wall and into the slot to set up the goal.  And when I say watched, I mean watched.

The faceoff circle was an interesting place this evening.  Penner, Cogliano and Gilbert Brule combined for a 13W 12L performance.  Colin Fraser, Ryan O`Marra and Sam Gagner combined for 10W 18L.  Does Katz Inc. have enough money to create a bionic knee for Shawn Horcoff?

J.F. Jacques skated right on by the puck three times in the first two periods to attempt to hit.  I get the fourth line is out there to "play with an edge", but acquiring the puck should be paramount, especially for a team that never possesses it.  Rather than go hard after the puck, Jacques is so focused on making a big hit he disregards the entire point of hockey.  Liam Reddox is stuck in Oklahoma City because of this lug and there's no doubt the Oilers would be a better team with Reddox on the roster.

To say that any Edmonton Oiler forward not named Penner, Hall, or Paajarvi struggled this evening is an understatement.  It was brutal out there.