Hockey Blogging in the Classroom

Share All sharing options for: Hockey Blogging in the Classroom

From Mom's Basement to the Hallowed Halls of Higher Learning

Recently we at the Copper and Blue received an unexpected invitation - to speak to a class of university students about hockey blogging! The invite came from Bill Foster and Stacy Lorenz, co-instructors of the third-year Management/Phys-Ed course Hockey: Culture and Commerce at the University of Alberta's Augustana College in Camrose. From the course syllabus:

AUPED 360/MGT 360 is intended to explore the cultural and business aspects of the sport of hockey. There are two main goals of the course. The first is to identify, explore, and question the connection between the sport of hockey and various cultural artefacts and practices. The second is to discuss, assess, and analyze some of the different business practices that are common in the sport. We will focus the class on hockey in Canada and the National Hockey League (NHL), but we will not limit our discussion to these subjects. As a team-taught class we aim to offer two different perspectives on one topic. In so doing, we will increase the student’s knowledge about the impact of hockey from a cultural and business perspective.

With so many of the Copper & Blue's crack writing team located far from Edmonton, it fell to me to take on this request, a task I accepted with alacrity. So this past Wednesday I doffed my usual writing attire (pyjamas, natch), had an actual shower, and braved the freezing rain for the 100-km drive to Camrose.

Upon arrival I was greeted by Bill Foster, got set up in the classroom, then enjoyed a nice lunch in the cafeteria. Bill is a lurker in the Oilogosphere who proved to be pleasingly up-to-date both on the strengths of various blogs and, perhaps by extension, on the current state of the team. Soon enough the clock crawled towards 12:50 and the start of the 75-minute session.

After the class of 23 settled in I gave a brief introduction of who I was, including my own history on the Oilogosphere as a commenter, a solo blogger on Oil Droppings, a writer here at the SBN site Copper & Blue, and more recently at Cult of Hockey, a hockey blog which runs under the MSM banner of the Edmonton Journal. I then ran the video of Tim Micallef's recent spot on the Score about the emergence of sports blogging, focussing on the recent "Colie" Campbell email controversy that was exposed by blogger Tyler Dellow (who I pointed out to the class was posting under the clever pseudonym of "Tyler Dellow"; it was easy and fun to put the lie to some of the more outrageous claims of Damien Cox in that video). In particular I focussed on the double-edged sword known as "access" and what limited value that has when the insider becomes reluctant to share what they know, for personal, professional, or political reasons. By way of comparison, I commented of the freedom of expression provided by lack of access, and of the more direct and honest connection of one fan writing to other fans without the pretension of being somehow "above" rooting interests. I also spoke of the the Oiler organization's rather antediluvian attitudes towards the new media, and mentioned a couple of episodes of organizational strong-arming such as the notorious "Zambonigate". 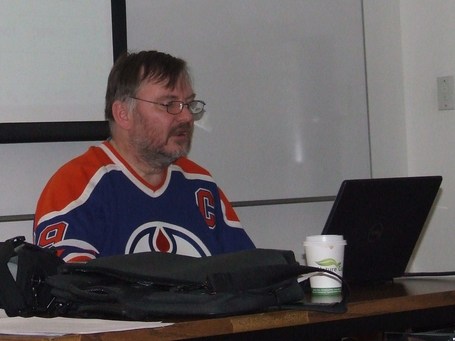 Rather than a formal canned presentation, I had simply plugged my laptop into a projector with a number of my favourite sites pre-opened in tabs. I pointed to examples of advanced statistics, and to several blogs providing statistical analysis. I tried to balance this hardcore hockey stuff with pointers to sites featuring outstanding writing and social commentary.

All too soon the time was winding down. I was pleased with the students' attentiveness during this, their last "regular" class of the term, and rewarded with a nice round of applause when done. The instructors expressed satisfaction with the relevance of the material for their program, and a desire to have me return when they next offer this course, likely in the 2011-12 academic year. 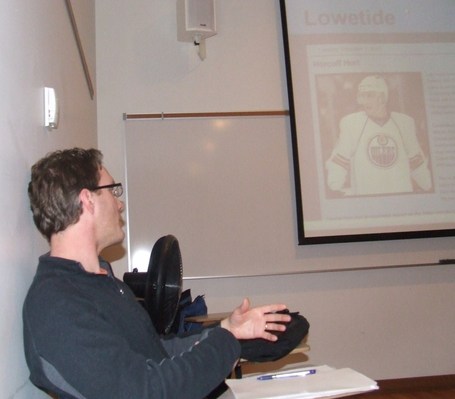 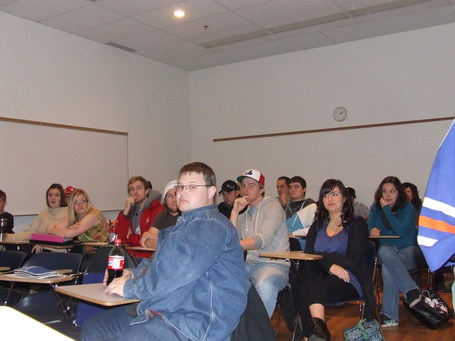 The students of Hockey: Culture and Commerce. Check out that Expos hat!