Share All sharing options for: OKC - Quality of Competition and Teammates (Part Two)

Earlier in the season, I took a spin through the AHL gamesheets in order to get an idea of (a) which players were scoring (and out-scoring) at even strength, and (b) which players were taking on the tougher minutes in Oklahoma.  We've all been spoiled by Vic Ferrari and Gabe Desjardins at the NHL level - that kind of information is now at our fingertips, and consequently, our understanding of the game and of individual players has been much improved.  But for AHL players, "contextual" information isn't readily available. As such, I decided to use a modified version of the quality of competition formula that Jonathan has used in the past in order to track the quality of competition and quality of teammates for the Oklahoma City Barons.  I've now updated that data for the Barons' first twenty-six games.

The method I'll be using is very similar to the one I used to track the quality of competition for the Regina Pats last season (so that we might better understand the context of Jordan Eberle's and Brandon Davidson's ice time).  To measure quality of competition, I simply looked through the boxscores and identified all of the opposition forwards on the ice for every goal scored both for and against while each player was on the ice at even strength (excluding empty net situations).  For quality of teammates, it's the same process, but I'm identifying the forwards on the player's team rather than his opponents.  The final "quality of competition" number is the average points per game of the opposing forwards when a given player is on the ice, and the final "quality of teammates" number is the average points per game of that player's forward teammates.  For example, a player with a "quality of competition" score of 0.500 would be facing forwards who, on average, have scored 0.500 points per game in the AHL during the 2010-11 season.  I like the method because the final number should be pretty understandable.  I'm hoping that it's straightforward, but if you've got any questions, please do ask.

Here are the results for the defenders (organized by QC with a minimum of ten goal events; EN totals are not included in the EV point categories):

Jake Taylor heads the list by a pretty hefty margin, but he also has the fewest goal events, which means his number is the least reliable of any on the table.  Frankly, I don't think he's taking on the toughs.  In fact, it looks to me like no one has been specifically tasked with taking on tough competition among the defenders.  If we accept that Johan Motin is a third pairing man, the gap between Taylor Chorney and Alex Plante (they're partners!) is tiny.  To me, this makes Chorney, Plante, and Richard Petiot look a bit better, and simultaneously makes Shawn Belle and Jeff Petry look a little bit worse.  Those minuses stand out in a bad way, and it's not like the pairing has been a lot better since we first looked in (Petry was -6, and Belle -3 through twelve games, which means Petry's been -2, and Belle -5 in the last fourteen), and they probably shouldn't be given the benefit of the doubt that comes with taking on the tougher assignments.

Next up, the forwards: 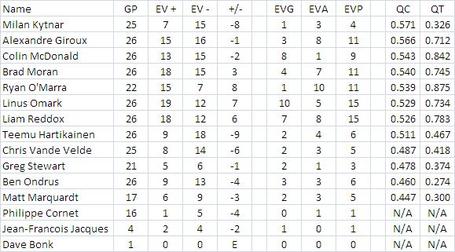 With the exception of Milan Kytnar, this looks pretty much how I'd expect, with the to six forwards seeing the most difficult ice time, followed by Teemu Hartikainen who spent time with Liam Reddox and Linus Omark when Ryan O'Marra was injured (Reddox was the center), followed by the rest.  But why isn't Kytnar part of the rest?  The two most likely explanations would seem to be that the number here is a fluke and Kytnar will come back, or that he's been holding down the third-line center spot and has had different teammates rotating between his defense-first line and Chris Vande Velde's soft minutes fourth line.  At a guess, Kytnar is probably seeing a lot of DZ FO's, and other teams are putting out their offensive weapons.  If that's the case, and Kytnar is playing a tough defensive role with help from guys like Ben Ondrus, Teemu Hartikainen, and Matt Marquardt (his most frequent teammates), it's easy to see why the +/- number is suffering.

As for the other rookies, two seem to be adjusting quite well, and then there's Phillipe Cornet who just isn't getting on the ice.  He's only been dressed for six of the last fourteen games, and wasn't on the ice for a GF in any of them.  The young man is still struggling.  Chris Vande Velde, on the other hand, seems to be taking some steps forward even if the offense hasn't yet come.  He was -6 through his first twelve games, and has been even in his last fourteen.  Teemu Hartikainen was also -6 through twelve, and has improved that to -3 over his last fourteen.  Unfortunately, that slow development cycle is about to get put on fast-forward.  The Barons have only had one line consistently outscoring this season, and now two of its members are in Edmonton.  The kids will be forced into more ice time and tougher competition.  Here's hoping they can handle it.

For those of you who are curious, I'll likely have another update on these numbers in early February, probably on the 2nd.  Since these important call-ups are likely long(ish) term, and line up so nicely with this update, it should be fun to look at the splits for some of the players being thrust into more important roles.