Relocate The Chicago Blackhawks? Not So Far-Fetched Just Four Years Ago.

Share All sharing options for: Relocate The Chicago Blackhawks? Not So Far-Fetched Just Four Years Ago.

The Thrashers have set record lows in attendance in their last two home games.  Columbus attendance hit an all-time low in October and the owner has not yet begun to fight.  Phoenix hit an all-time low, drawing less than 7,000 fans when they played the Kings in October.  Gary Bettman and Bill Daly use the spectre of moving to Winnipeg as a guillotine blade for any city that steps out of line and doesn't break a lease or build an arena.

All of this looks bad, very bad for these franchises. Drawing such terrible attendance numbers is a black mark for the NHL, one that could be rectified with a simple franchise relocation.

When I looked at the Blue Jackets, the graph showed that they haven't been able to crack 90% capacity in the last four years. From 2002 - 2007, the Blackhawks weren't able to break the same barrier.  Chicago was a terrible team that couldn't draw fans, even with a new arena, even in a city of 9,000,000.  The Blackhawks were the worst franchise in the NHL.  Below is a graph showing attendance by capacity and points earned by the Blackhawks. 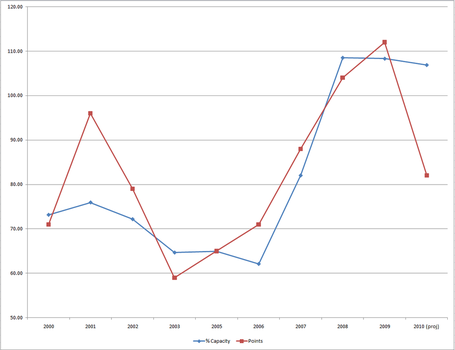 It was the perfect time to relocate the team, maybe to Winnipeg, maybe Hamilton, maybe even Quebec City.  The Blackhawks were still a prized property, a worldwide brand with Original Six history and buyers would have lined up for a chance to purchase the team and move them to a real hockey market where they might have a chance at success.

The Blackhawks were in the final throes of the miserly ownership of Bill Wirtz.  He wouldn't put the Blackhawks on television in Chicago, publicly holding fast to his long-held belief that televised games submarined season ticket holders.  Most believed that Wirtz felt televised games would harm season ticket sales.  A legendary skinflint, he bickered with the players and traded nearly all of his stars rather than pay them.  In reality, once salaries began to escalate, Wirtz became the biggest obstacle to his own team's success.  The Hawks, conventional wisdom held, might return to prominence if they could only get out from under his thumb.  Management was the sole reason the Blackhawks were so bad and fans around the NHL were sympathetic.

Now, however, NHL fans don't show any sympathy to teams in tough situations, especially those saddled with abysmal management.  Atlanta and Columbus have only appeared in the playoffs once in the last ten years and Phoenix has made the playoffs three times in the last decade.  These teams have been terrible for a long time, much like the Blackhawks were when their attendance plummeted.  They've been mismanaged by General Managers like Doug MacLean and Don Waddell and have been cursed with owners that have made a run at Wirtz for the title of most tight-fisted.

These teams have the same problems the Blackhawks had just four years ago, yet rather than show a little compassion and hope that the team finds a new owner or that ownership brings in a new General Manager, fans around the league root for Gary Bettman to forcibly relocate franchises like the Predators, Panthers, Lightning, Blue Jackets, Coyotes, Hurricanes and Thrashers to more northerly climes.