You know, I love the month of November usually. The air is crisp, you can hear leaves crunching beneath your feet and usually we start to see that beautiful white stuff. Since 2007 however, I have a whole new reason for liking November. That's right, the Movember movement. There is nothing like a man with facial hair, let alone a mustache and now you guys all have a reason to get behind this idea. I know some men feel self conscious about growing a mustache and you worry that your mustache isn't as great as the next guy's but let me assure you gentlemen, your efforts do not go unnoticed and are much appreciated. Also, most girls aren't as picky or judgmental as you worry they are. Kudos for any of you men out there growing a stache to raise money and awareness for men's health concerns. I actually invite you to update the readers here with how your stache is coming along. The Oilers are once again putting aside their razors for the cause, and that Barons are getting behind this too and are you ready for this one, the Oil Kings are onboard as well! So all of you fabulous Mo Sisters out there you can get involved by sponsoring someone involved and encouraging them throughout the month of Movember.

In other good cause news, Jason Strudwick and Kurtis Foster spent some time playing floor hockey with the students of Norwood School’s Inner City Children’s Program. Jason Strudwick has always been eager to get involved with children and charitable works, and I think its fabulous that Foster is able to do the same so soon after joining the team. I often wonder how new players will take to the fishbowl, and if that will deter them from getting involved in the community. It's wonderful when it doesn't.

In other Oilers news Jeff Deslauriers was put on, and subsequently cleared waivers, finding himself with the Oklahoma Barons. At the same time, JF Jacques has been reactivated from IR and is currently completing a conditioning stint in Oklahoma. It is a relief that the Oilers have made a decision for goaltending, so hopefully now both Dubnyk and Deslauriers can see ice time.

News that really made me happy this week, was from the mouth of Tom Renney. Renney has stepped up and basically said that he will not call out his players. He feels that there are enough problems to deal with without players hearing through the media that their coach is unhappy with them. This will be different from what we were seeing from Pat Quinn last year. I did believe that Quinn was only doing what he thought was being honest and open, but it wasn't good for establishing trust and connections between the players and coaching staff. Let's hope that Renney holds true to his word and that it has some positive effects.

The Oilers have hired a sports psychologist. I guess it can't hurt, I don't know what players who want to talk to one wouldn't have already gone out and found their own psychologist, someone that they feel comfortable talking to. You all have friends that you don't feel comfortable spilling to for whatever reasons, and I'm sure that not everyone will work well with this one individual. Oh well, it can't hurt.

Also, a blog written by someone at CBC concerning Taylor Hall and his obsession of wearing the number 4. Kevin Lowe spoke with Bob Stauffer about this, declaring it ridiculous. It did spark some discussion among the Oilers fans and bloggers. Truly, I couldn't see this being even remotely true, so I'm glad that it ended up being a fairly quiet piece of news for the week.

The Oil Kings are still in a losing slump, scoring only half as many goals as their opposition in both of their games this week. Surely this will all come to an end soon, maybe even tonight on their current roadtrip.

In NHL news, there is still discussions about the new headshot ruling, which saw Joe Thorton and Danny Briere were each suspended this week due to a headshot and repeat offender call

Sydney Crosby had his 5th NHL fight and that made some headlines. Honestly I'm not so sure why. True he isn't known for his fights, but it is all a part of the game of hockey. Players are going to fight, skilled players or not. I do agree that this fight took the team's most skilled player off the ice for 5 minutes when they were losing, and the team just ended up losing by a higher margin. Oh well, it happend, we've moved on and likely because he didn't break his hand... Just saying...

In other news, Dion Phaneuf has made news for two reasons lately. Firstly he is getting booed in Toronto, even causing GM Brian Burke to stand up and say that people shouldn't be booing Phaneuf. Then, The Dion suffered a cut to the back of his leg that required surgery to repair. So, he will be out of the news for the next couple of weeks. I'm sure I won't miss him.

The biggest NHL news centres around our beloved Ryan Smyth. Smytty will be playing his 1000th NHL game tonight against the Nashville Predators. Smyth will be player number 275 to reach this milestone. The ceremony commemorating this man will likely see me once again shed some Smytty tears. I will never forget the day he was traded, and how crushed I felt.

The Copper and Blue free online NHL 11 Rivalspot tournament against a bunch of Canucks fans has been rescheduled to November 13th at 8PM MST. We still have places, and if we don't get enough players this may not happen. You can email me at lisa.mcritchie@gmail.com if you have any questions about this.

And of course, this month is also Jovember, you can go here to get yourself a copy. 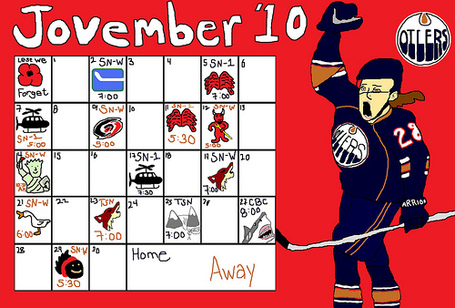 Here are some blogs you may have missed this past week:

Top ten reasons why it feels so good to be an Oilers fan, even thought the Oilers are one of the worst teams in the NHL - Cult of Hockey Staples

Sheldon Souray: He Just Doesn't Get It - Oilers Nation Brownlee

The NHL's Greatest Mustaches, Part I - Houses of the Hockey Lewis

Kings will win Stanley Cup, as other NHL teams don't have a prayer - Puck Daddy Wyshynski

Rookie of the Month? Shoulda been you, Jordan Eberle - Puck Daddy Wyshynski

An NHL fan's guide to booing - Down Goes Brown