OKC - Quality of Competition and Teammates (Part One)

Share All sharing options for: OKC - Quality of Competition and Teammates (Part One)

Probably the best thing about sites like Vic Ferrari's Time on Ice and Gabe Desjardins' Behind the Net is the amount of quality new information we're able to glean from what's being tracked.  The "contextual" statistics are, in my opinion, particularly helpful in fleshing out the profile of players I might not see very often.  Unfortunately, so far that kind of information isn't being tracked for the AHL, where there a lot of players who I'd like to learn about, even though I don't get a chance to actually watch them play.

Thankfully, if we roll through the AHL gamesheets and use the information provided there, we can get a better idea of how the prospects are doing without relying exclusively on what's available on the AHL stats page. In order to get a sense of the context of the ice time for the players in Oklahoma City, I modified the quality of competition formula that Jonathan Willis had used previously in order to track the quality of competition and quality of teammates for all the Barons.  After the jump, we'll take a look at the data.

The method I'll be using is very similar to the one I used when tracking quality of competition for the Regina Pats last season (to better understand the context of Jordan Eberle's and Brandon Davidson's ice time).  To measure quality of competition, I simply looked through the boxscores and identified all of the opposition forwards on the ice for every goal scored for and against while each player was on the ice at even strength (excluding empty net situations).  For quality of teammates, it's the same process, but I'm identifying the forwards on the player's team rather than his opponents.  The final "quality of competition" number is the average points per game of the opposing forwards when a given player is on the ice, and the final "quality of teammates" number is the average points per game of the player's forward teammates.  For example, a player with a "quality of competition" score of 0.500 would be facing forwards who, on average, have scored 0.500 points per game in the AHL during the 2010-11 season.  I like the method because the final score coming out should be pretty understandable.  I'm hoping that it's straightforward, but if you've got any questions, please do ask.

Here are the results for the defenders (organized by QC with a minimum of six goal events):

At this point, I should probably point out that the year is still young, and that since these numbers are based on league-wide performance, this first report will be the least valuable.  As the year goes along, we can probably be more confident that these numbers are telling us the right story.  At any rate, after going through all of the games, the regular defense pairings aren't quite what you'd expect from the chart above.  From what I can glean, the regular pairings for most of the first twelve games were Chorney - Plante; Petry - Belle; and Motin - Petiot, although I'm sure Neal will add some nuance to that if any is needed.  The spread in both QC and QT is pretty small here, which makes me think that the Barons may not have a designated "shut-down" pairing.  If they do, it's not so obvious in the numbers that I can pick it out.  On the other hand, Richard Petiot's big lead in goal events leads me to believe he's the guy getting the most ice time at even strength, and knowing that Taylor Chorney is putting up good results without being sheltered (although he's the only one who's QT number exceeds his QC number) is encouraging.  Maybe he really is turning a corner, at least at the AHL level.

Next up, here are the forwards (again organized by QC with a minimum of six goal events): 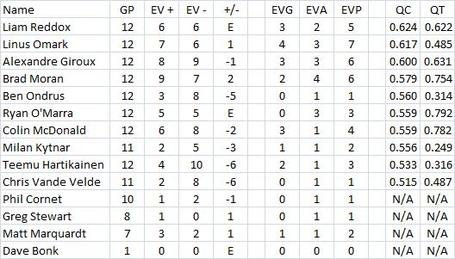 This time I'm very confident that the top two lines have been pretty consistently Omark - O'Marra - Reddox and Giroux - Moran - McDonald, although Vande Velde seems to appear from time to time in the top six, and with some of the better players four-on-four.  Those two lines have also generally taken on the tougher competition, which is great news for Oiler fans.  Liam Reddox should be the first call if the Oilers ever want to make a non-Jacquesian change on the fourth line, so it's good to know that he's having some success.  It's also good to see that Omark is not only scoring, but leading the team in EV scoring, and doing so against quality AHL competition despite having the always-offensive Ryan O'Marra as his regular center.  Derek just wrote about the Oilers perhaps needing a left-winger for the top nine on the NHL club, and at this point, I'd strongly consider giving Omark a shot.

Having said all of that, you can only protect the bottom of your roster so much, and the guys playing on the third line are getting filled right now despite some limited shelter.  Hartikainen, for example, has struggled mightily to stay even playing on a line with Ondrus and Kytnar (or Vande Velde), but that's partially because they're taking shifts against much more offensively-gifted players.  Hartikainen, Vande Velde and Kytnar are all AHL rookies, and it doesn't look like Ondrus is talented enough to carry them around.  With Jacques heading to Oklahoma for rehab, the top nine is suddenly much deeper, and at least one of the rookies (whichever of Kytnar or Vande Velde can stay in the top nine) should have a strong next few games.  Judging by the events break-down, the other two won't be getting much ice time at all.  There are only ten forwards with six events through twelve games, which suggests to me that Todd Nelson is basically running a three-line team.

For those of you who are curious, I'll likely be doing one of these every month with the next one tentatively scheduled for December 10th.