Last season, the Colorado Avalanche were consistently outshot and outchanced, but some fine goaltending from Craig Anderson and a superlative shooting percentage helped the team into the playoffs.  Considering the lack of change over the summer and the tight budget the team was running on, I was expecting to see the Avalanche improve as a team, but regress significantly in the standings because of a regression in their percentages (and their team shooting percentage in particular).  But that hasn't happened.  Instead, the Avalanche have improved their territorial game markedly - they've gone from being outshot by 4.2 shots per game in 2009-10 to outshooting their opposition by 0.8 shots per game this season - which has more than overcome a slight decline in percentages, and now sit with the second best goal differential in the Western Conference.  They've done this despite long or medium term injuries to some of their most important players including goaltender Craig Anderson, shut-down defender Kyle Quincey, and top-nine forward Peter Mueller.  It really has been a tremendous start to the year for the Avalanche... which makes the trade of Scott Hannan to the Washington Capitals in exchange for Tomas Fleischmann very odd indeed.

Last season, Scott Hannan was one of Colorado's very best defensemen, contributing mostly an even strength on a shut-down pairing with Kyle Quincey.  It was clear by eye, and by all three of Gabriel Desjardins' quality of competition measures that these two were taking on the best that the opposition had to offer.  They also had the honour of starting much more often in the defensive zone than any of Colorado's other defensive pairings, and yet Hannan was still able to post an above average scoring chance percentage (although that data comes from only the first half of the season).  I haven't watched the Avalanche as much this season, and the metrics at Behind the Net are somewhat less clear about Hannan's role (he looks to be middle of the pack in quality of competition, but mostly because of injuries, the sample is only ten or fifteen games for most of Colorado's defenders), but he has continued to take on a large share of defensive zone starts, take on top four minutes at even strength, and lead the defense in ice time on the PK.  The Avs' goal differential with Hannan on the ice has been quite poor so far this season but that has a lot to do with a poor PDO number (shooting percentage + save percentage) of 97.4 (where 100.0 is average, although the Avs' team average would be higher still).  On balance, I think it's fair to say that Hannan has been one of Colorado's most important defenders over the last season and a quarter, and that losing him will very likely make the Avalanche worse defensively.

This would all be forgivable if the player the Avalanche received in return was already quality, or a key piece of the future, but the player they received in return is neither of those things.  The player they received in return is Tomas Fleischmann.  Now, Fleischmann is one of those guys that people say has a lot of skill but can't be consistent.  To me, that's just a nice way of saying he's not a very good player.  Statistically, last season was Flesichmann's best, but even that required some outstanding opportunity and some flashy percentages.  Fleischmann's shooting percentage last season was a career high 19.0%, and his on-ice shooting percentage at even strength was 13.4%, both of which are extremely likely to come down.  Fleischmann also had the opportunity to play a lot on the power play, which is where he scored twenty of his fifty-one points.  Turning to a brief WOWY analysis of Fleischmann's season, we see that the majority of his most common linemates did better away from Fleischmann than they did with him (minimum 200 Fenwick events): 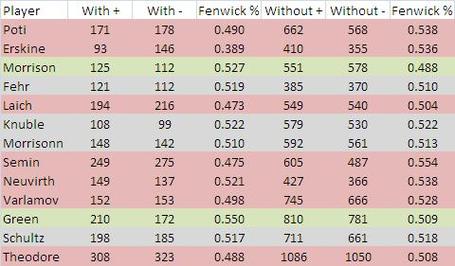 The good news here for Fleischmann supporters is that his season wasn't boosted by playing with the Caps' big guns - it was rare that Fleischmann played with Alex Ovechkin or Nicklas Backstrom.  The bad news is that he didn't play with them because he didn't deserve the opportunity.  This season, Fleischmann has continued to struggle, to the point of being a healthy scratch on two seperate occasions.

I don't want to say that Fleischmann is a particularly bad player (he isn't), but he isn't particularly good either, and hte Avalanche gave up a very useful piece to acquire him.  It seems a safe bet to me that Scott Hannan could be effective in a much more important role.

The other odd part about this deal is that Fleischmann is an unrestricted free agent at the end of the season, so the deal doesn't help Colorado get better long-term.  Avalanche GM Greg Sherman hid that point in the press release by saying that the player they acquired "is only 26 years old."  That's true enough, but unless the Avalanche can get his name on a contract between now and July 1st, he's not going to be in the long-term plans.  So why would the Avalanche make this trade?  The earlier deal for Matt Hunwick - the Avs sent Boston legitimate defense prospect Colby Cohen to get him - makes it seem unlikely that they were making room for someone already within the organization, so it would seem to me that there are three reasons that all played a part in the decision: the first is that Greg Sherman seems to believe Fleischmann is a better player than I do (he characterized him as a "top six forward"), the second is the fact that the Avalanche are dealing with some serious injuries to their top wingers (Chris Stewart and Peter Mueller are both out long-term and Fleischmann may well be an adequate band-aid), and the third is money.  For whatever reason, the Avalanche seem to be pinching pennies, and this deal saves them just over $1.3M over the rest of the season.

For the Capitals, this is a great deal.  They've spent some of their extra cap space, but in doing so have made a substantial improvement to their defense without sacrificing any prospects, picks, long-term cap space (Hannan is also unrestricted at year's end), or essential cogs in the team they have today.