At even strength the Oilers haven't been good, but they haven't been terrible either.  Of course, the Oilers' biggest problem is not even strength play (as we've already shown); in fact, Edmonton is currently tied for 13th in the league in even strength goal differential per game.  Thanks to Dennis King's scoring chance project we know the early season scoring chances average for the forward group shows them giving up just less than one chance more per 15 minutes of even strength ice time than they are able to generate.  Over the course of a season, that should work out to roughly a 10-goal deficit at even strength.  If they are able to maintain this level of play (and injuries will have a say in that), they will be much better off than most predictions expected.

However, there is one serious issue right now at even strength - Magnus Paajarvi.  He's a +3 at even strength in the goal count, but looking at the underlying stats, it's not sustainable.  His scoring chance totals to this point show that he's been buried for much of the season.  Paajarvi is giving up almost two chances for each chance generated and he's coughing up 2.3 chances more than he's generating every fifteen minutes.

Because we've seen Paajarvi trying to backcheck - and sometimes ferociously - we've assumed that he's been playing all zones relatively well.  I've blamed the third line's problems on Brule and Cogliano because I've seen Paajarvi racing back to break up plays.  Others have done the same.  However, there's a real chance that our confirmation bias is distorting reality.

Prior to the game against Chicago, Tom Renney made a significant line change.  He moved Paajarvi up to play with Sam Gagner and Ales Hemsky, and slipped Dustin Penner down to play with Andrew Cogliano and Gilbert Brule.  Before the line changes, Cogliano and Brule were struggling, especially Brule, who was giving up two chances for each change generated.  Meanwhile, Penner, Hemsky and Gagner were coming out on top.  Below are the chances numbers for those two lines prior to the change:

Since the change, however, the Cogliano - Brule combo has become much more low event and are breaking even, but the Gagner - Hemsky combo has struggled to create any chances and is getting their skates fed to them in the defensive end:

Like a gravitational pull, the Penner Effect is impacting both lines.  His all-zones play on the Cogliano line has stabilized that group and allowed them to get the puck out, but removing him from the Gagner line has exposed that line in their own end.

This was evident in the Canucks game.  If you look at the Head-to-head ice time, you'll see that the Gagner line spent 70% of their time playing against Malhotra and Kesler.  They lost the chances battle badly: 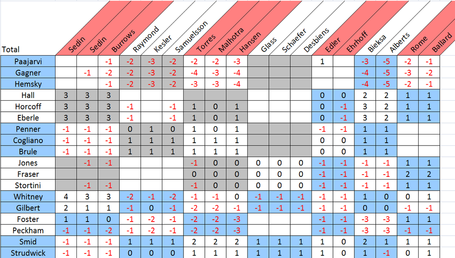 The Oilers don't have many options at their disposal.  Penner means so much to each line that Renney has to choose his poison.  There is no other left wing on the roster that can play top nine minutes, so the coach is stuck between sacrificing the Gagner line or the Cogliano line.  How can Renney solve this?