Share All sharing options for: Elite Players or Superior Depth?

With a salary cap in place, there have been various theories on how best to spend money.  Are teams better off spending on a few elite players, or are they better off gathering more high-to-mid-tier players and beating teams with superior depth?  The Chicago Blackhawks had the best of both worlds last season, but once they actually had to make a decision, the depth was booted out the door and the stars all stayed.  Was it the right call? I think it's an open question, and in attempt to provide the beginning of an answer, I'll look at what the various teams seem to believe based on where they're spending money for the 2010-11 season.

The chart below tracks the pay range teams are using to spend their money.  Any slots highlighted in blue mean that the team has a below-average number of players in that pay range.  Any slots highlighted in red mean the the team has an above-average number of players in that pay range.  One final note: any players that teams have managed to send away to Europe or the AHL (like everyone's favourite Oiler, Sheldon Souray) are still included in the chart, and all of these cap numbers include bonuses (many thanks to NHLnumbers for the salary information): 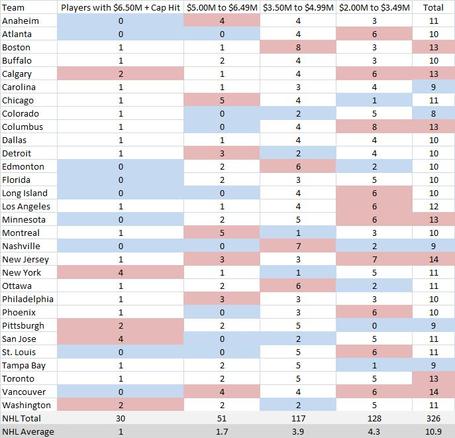