Oilers Wake Up In Time To Beat Senators 4-1

Share All sharing options for: Oilers Wake Up In Time To Beat Senators 4-1

After suffering the slings and arrows of outrageous decisions, Oiler fans see a stretch of alternating wins and losses and are overcome with joy.  An 82 point pace over the last two weeks?  Take it and run for the hills.  Since Nikolai Khabibulin has gone down with injury, the Oilers have found some NHL-level goaltending, including a .925 save percentage at even strength (compared to Khabibulin's .908) and .881 on the penalty kill (compared to Khabibulin's .750) and that goaltending has given the Oilers a chance to be competitive each night.

The Oilers looked like they forgot they had a game to play and essentially went through the motions in the first period.  The were lucky to escape down only one.  Ottawa controlled the play, the shots and drew three penalties on an Oilers team that looked old and slow.  But the little Swiss goalie kept them in the game until they were able to wake up.  The second period was nearly a polar opposite of the first.  The Oilers controlled the play, drew four penalties, and capitalized on one of the four power plays and Tom Gilbert was credited with the goal on a dual screen, but from my vantage point, the puck was pretty clearly tipped.

The third period saw Tom Renney roll three lines over the boards, but lean on his top two pairings a bit more than his third and the suddenly hot Andrew Cogliano created a couple of goals to ice it.  Taylor Hall added an empty-net goal to throw off Sportsnet's early-season comparison of his rookie scoring rates.

The Tom Gilbert / Theo Peckham (Teddy Peckman for the senile) and Ryan Whitney / Jim Vandermeer combined to take on nearly all of Jason Spezza's minutes and though Spezza, Daniel Alfredsson and Peter Regin got off nine shots, they were beaten by the Oilers' top two lines and top two pairings.  The only Senators line to do any damage was the Chris Neil - Chris Kelly - Nick Foligno line that tallied chances against nearly every Oiler and the Senators lone goal.  It might have had something to do with Kelly's 11 W - 3L performance in the faceoff circle.  I had a Senators fan friend tell me today that the only line worthwhile lately was Kelly's line and that the Leafs game covered up some real deficiencies in the top six forwards and bottom four defensemen.  Not much to fix then, eh? 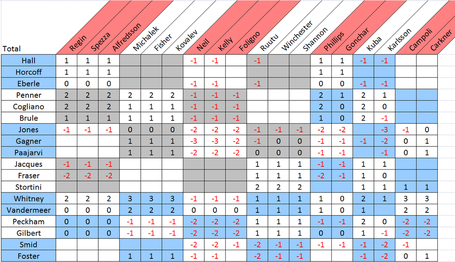 Someone woke up Dustin Penner in the second period and he spent the next 40 minutes dominating Ottawa.  He was credited with two assists, but unless my eyes and a frame-by-frame replay are way off, he also should get credit for the Gilbert goal.  The puck clearly changed direction after passing by his stick in mid air.  His play was encapsulated by the play leading up to the Brule goal in the third.  He won the defensive zone faceoff, though the Oilers struggled to get the puck out.  After Tom Gilbert moved the puck to the corner, Theo Peckham flipped the puck up the wall towards Penner, Peter Regin and Filip Kuba.  Penner out-muscled both Senators to get the puck to Cogliano for the eventual goal.

Andrew Cogliano is once again playing like he has a place in the NHL, and although he's being influenced by the Penner Effect, with Ales Hemsky out, he's also getting second tough minutes.  He's still struggling in the faceoff circle and with his assignments, but he's showing much better lately.

Magnus Paajarvi stood in front of the net and screened the goaltender on a power play, something only one other Oiler has done over the last two years.  He's not spent much time on the ice with a man advantage as he ranks seventh in ice time amongst forwards, but if he's willing to go to the net and create a screen, he deserves more time on the power play.  Maybe Hemsky's power play struggles can be solved by finding a left-handed weak side shot, giving him that missing passing option.  If Paajarvi can work in front and on the weak side, he's worth an extended look with Penner and Hemsky.

Martin Gerber kept the Oilers in the game in the first period when he turned away ten of eleven shots and played a calm game, controlling the puck very well.  He's played two games thus far and has been C&B's first star in both of them.  He might be a journeyman returning from the European Leagues, but Gerber has played like quite a bargain in the early going.

The first period performance by nearly everyone but Shawn Horcoff, Taylor Hall and Jordan Eberle was uninspiring.  Ottawa controlled the puck nearly the entire period, winning the chances battle 5-2 at even strength and that possession allowed them to draw three penalties.  It was another terrible first period for the Oilers, a problematic theme since the road trip of despair began.

As we saw in the Sam Gagner's scoring chance WOWY, he's not a strong enough player to carry a line on his own yet, especially not with two wings that have struggled all season long.  But tonight's struggles for that line weren't attributable to Gagner - he worked hard in the corners and on the boards and seemed to change his game a bit more towards a plugger tonight.  After taking a penalty in the first, he played a very strong game.  His linemates let him down a bit, especially Ryan Jones, who seemed to be chasing the play from the start.

The Ugly
The ice in Ottawa was a mess.  This is the third time I've written about the ice in a post game, and I'm sort of surprised I'm writing it about Ottawa.  The humidity was up, yes, but it was near freezing by game time.  The puck was bouncing around from the start and it only got worse through the second period.  I don't know what's going on with the ice plants around the league, but I'm recording scoring chances for the Panthers and I've only noticed terrible ice twice, in South Florida.