There's a lot of talk about teams getting "lucky" on this (and other sites); it's a discussion that's usually based on percentages. Is the team's shooting percentage abnormally high? Is the goalie having an abnormally good season? Is he making a ridiculous amount of saves on the PK, propping up an otherwise poor penalty kill? Things like that. But another element of luck is winning one-goal games. Good teams have a tendency to win more often by two or more goals, whereas poor teams struggle to do that. On top of that, there's almost no correlation from season-to-season in a team's ability to win one-goal games. That's one of the reasons that goal differential is often a better indicator of team quality than standings points. That doesn't, of course, mean that a team winning a lot of one-goal games is poor, but it does mean that a team that rarely wins by more than one is probably poor. After the jump, we'll take a look at how teams have done so far in games decided by two goals or more.

First up, let's take a brief look at the Eastern Conference: 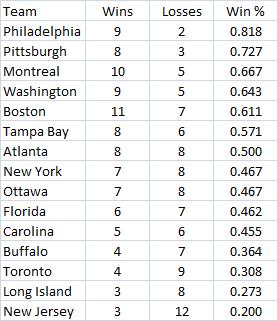 First off, isn't it refreshing to see standings that make sense? For every win, someone needs to lose. Imagine that. Anyroad, there are six teams in the Eastern Conference who look to be clear of the pack, although pretty much Tampa Bay is clearly the weakest of that group. Unsurprisingly, they're also the weakest in that group by goal differential, and in fact, are worse than Atlanta, New York, Florida, and Carolina by that measure. Obviously, a couple of their clear losses were big ones.

Another interesting tidbit is how well the Southeast division does by this measure. Only the Capitals do really well, but that division doesn't have a single team represented in the bottom four clubs, which isn't something I would have predicted at the start of the season. Another point of interest is the Philadelphia Flyers. They look great by this measure, but all nine of their wins have come against teams who are below .500 in games decided by two or more goals. They've been able to beat up on the weak sisters, but haven't been able to dominate anyone good so far this season. 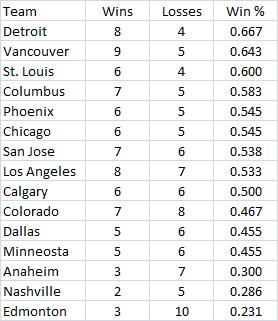 The West, in my view, is a little bit more interesting. I'll get it out of the way and say that the Oilers are a poor squad, but the surprising thing here is that they aren't alone. Both Nashville and Anaheim are in that clump of teams on the playoff bubble, but so far this season, they've been pretty awful by this metric, and while this isn't the be-all end-all, I wouldn't pick either of those clubs to make the playoffs. On the other hand, the Flames look much better by this measure - they've lost a lot of one-goal games so far this season, and are probably quite a bit better than their current record suggests, although they're still not actually all that good. This is great news for Oiler fans becuase the Flames shouldn't be a contender for the lottery, but they'll likely also miss the playoffs. Let mediocrity reign!