Weekend Update: Groin Injuries for Everyone!

Share All sharing options for: Weekend Update: Groin Injuries for Everyone!

No, not everyone is out with with a groin injury. 2 Oilerswere out with groin injuries this week and within 6 days of each other. That's a little strange, but stranger things have happened to this team. In case you haven't heard, Ales Hemskyleft practise Wednesday with what has been reported to be a groin injury. Hemsky is listed as day to day. Khabibulinhas reportedly been practising with the team and might be ready to play, but Martin Gerber saw his frist NHL start since April 11th2009 with Toronto. Many didn't know this, me included, but Gerber was recovering from a broken neck last year. So apparently he has several reasons to be excited about an NHL start. Ladislav Smid was cleared and ready to play Thursday night. Good news for our defence that just can't seem to pull it together. More on the injury front, my poor boy Cogs... The guy just can't catch a break! Split lip, chipped teeth, then he gets hit in the face with a puck sent flying by Tom Gilbert in Tuesday night's loss against the Phoenix Coyotes. To combat that, Andrew Cogliano had to wear a full face mask. When asked what the hardest part about wearing the mask would be his answer was remembering not to spit.

Movember comes to an end, well at the end of the month. If you haven't yet made a donation and were hoping to, what's stopping you? Get yourself over to the Movember website, or support the Oilers', the Barons', or the Oil Kings' efforts. The Oil Kings haven't been seeing much support. If you were feeling generous, that's where I would put my money. The kids did a really good job actually.

The third episode of Oil Change was presented on TSN Tuesday night. Don't spoil it for me, I haven't had a chance to watch it yet. It's sitting on my DVR at home. In case you missed it on it's original air date, you can see it again on TSN, or watch it online the Oilers website.

Tom Renney showed some real emotions after Tuesday night's shut out loss to the Phoenix Coyotes. Renney told reporters after the game "Its a joke. The battle level was non-existent tonight. The pride in the jersey was not even close to what it needed to be. It was an absolute joke, travesty." It was surprising to see Renney make such comments, but it was refreshing. It was good to see someone express just how unhappy they were with the current state of the team's compete level. It may or may not have been what sparked the team, the Oilers were able to come out Thursday night and pull off a win over the Colorado Avalanche. 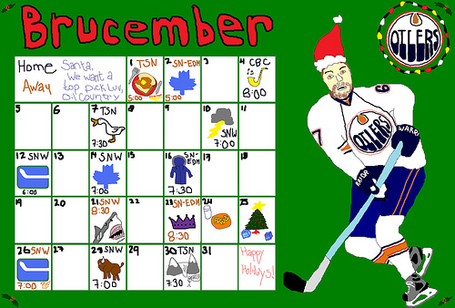 With Movember, or Jovember wrapping up, its time to look ahead. What do we see? Bucember. You can go to my flikr account to download a copy for yourself.

NHL news, the Vancouver Canucks Rick Rypien takes a personal leave. Could this be related to the fan grabbing incident in Minnesota? Possibly, but this is the second time that he has left the team for undisclosed personal matters.

The biggest news is likely Philladelphia Flyers defenceman Chris Pronger being called for breaking the Sean Avery rule (rule 75) for unsportsman like conductagainst Flames goalie Miikka Kiprusoff in Friday morning's game. Personally I understand why the NHL decided to create the Avery rule, but there really was no need. They already had unsportsmanlike conduct rules and there was no need to create another rule for what Avery did to Martin Brodeur in the 2008 playoffs. No matter, Pronger not only got called for his antics, but by doing so he also caused Mike Richard's overtime winning goal to be disallowed. So, Pronger doesn't look any better, his team loses in the shootout, and the world is as it should be.

Here are some blogs you may have missed:

I accept all of your conditions - Black Dog Hates Skunks

Do you give Phoenix the benefit of the doubt as NHL market? - Puck Daddy Wyshynski

Gretzky on Stamkos 50-in-50 chase: 'It's still a little early' - Puck Daddy Wychynski