Axl was right - nothing lasts forever.  Though the Oilers played like the typical Oilers through two periods - outshot 28-11 and outchanced 10-7, they had a one goal lead after one period and were tied after two.  Being in the game is something that neither the Oilers, nor the beaten up fanbase is accustomed to, so when the Oilers outshot the Avs 13-9 and outchanced them 11-7 in the third period, most of us were stunned.

The final 70 seconds of the game were dominated by men from the future transported back to 2010 as teenagers.  Magnus Paajarvi took a wonderful 105 foot pass from Ryan Whitney, broke in on goal (fended off an obvious hook) and tried Peter Budaj's five hole.  Seconds later Paajarvi dropped back into the zone for another chance.  It was all capped by a another rush, seconds later by Jordan Eberle, who won a battle, threw a beautiful feed to Taylor Hall, cross-rink, through the crease and Hall went top shelf on Peter Budaj.  As Eberle was battling for the puck behind the net (see the highlights after the jump), Hall was opposite him behind the goal.  Eberle won the battle and Hall broke to the side of the cage and called for the puck.  At first I thought Hall's call was "Yo Ebbs!", then I thought "In front", but now it sounds to me like he yelled "Go to the net!".  Any translation help is appreciated.

The Good
Three Oilers played their best games of the season tonight and the first was Gilbert Brule.  The Penner effect was back tonight for Brule.  He's essentially an even player with Penner on his wing and he gives away two chances for every chance generated without the big man.  Tonight, he played an excellent game and it showed in the defensive end.  He supported the puck well and backchecked hard.  It looked just like last season.
Even though Tom Gilbert has been taking it from all sides this year, he's still a talented defenseman with a quiet and effective style.  He's struggled to find his game since being separated from Ladislav Smid, but found that game tonight with Theo Peckham.  Gilbert was his old self again - smart, efficient, moving the puck well, avoiding the big hit and winning puck battles via leverage and positioning rather than attempting to overpower his opponent.
Gilbert's best game of the year was overshadowed by Theo Peckham's best game of the year.  Whether it was because Peckham was comfortable with Gilbert ranging through the neutral zone and defensive zone covering for him, or knew his partner could move the puck for him in a bind, Peckham was a physical force on the ice without taking himself out of the play.  I think he's going to get a call from Colin Campbell on the open-ice hit on Jones, I believe, in the first period.  Commenters have thrown around a Jason Smith comp from time-to-time, and games like tonight are the reason for that.  But these games have been too few thus far.  Peckham needs to play at this level more often - if he needs Tom Gilbert to do so, Steve Smith should make it happen immediately.
Martin Gerber was amazing in net.  He won his first game in the NHL since April 11, 2009 by being classic Martin Gerber.  He's seven inches shorter than Devan Dubnyk, but heavier.  He's a little ball of scramble in net, flopping around and flailing at puck after puck.  When he's on, he's great fun to watch, like Arturs Irbe in his prime.  When he's not playing well, a certain Pokey comes to mind.  Tonight was yet another example of a goaltender staying with the play and avoiding the rebound goals that Nikolai Khabibulin has coughed up all season long.  After watching Gerber tonight, I'm pretty sure the Leafs would have avoided the lottery last season had they kept Gerber over Vesa Toskala.

Jim Vandermeer and Kurtis Foster shouldn't be a pairing.  Foster was torched a couple of times and Vandermeer was his old roaming self throughout.  Part of the reason, I believe, for the OIlers third period rally was that the Vandermeer - Foster pairing took only four EV shifts in the third period.  Whitney - Smid took ten shifts and Gilbert - Peckham took nine and the Oilers looked better in the third  than they have since ... before daylight savings time ended. The coaching staff that rolls lines and pairings no matter the situation saw fit to sit these two.  Good for them.

Foster looked calmer and more protected while paired with Shawn Belle and there is reason for that - Belle is a better defender when compared to Vandermeer.  This year has been labeled as a rebuilding year by everyone from Daryl Katz to Shawn Horcoff, so bring Belle back to the fold and figure out if he's an option on the bottom pair.  Hanging on to Vandermeer in the hopes that he can become an asset at the deadline is pie-in-the-sky.

Dear Colin Campbell,
I understand this didn't 'happen to your beloved Gregory, but do you think you could maybe mention this to Terry Gregson next time you see him?  When a player is rushing down the ice by himself with the puck in the closing 70 seconds of a game and the opponent reaches out with his stick and yanks on said puck carrier, it's a hook.  For example:
*click to enlarge photo 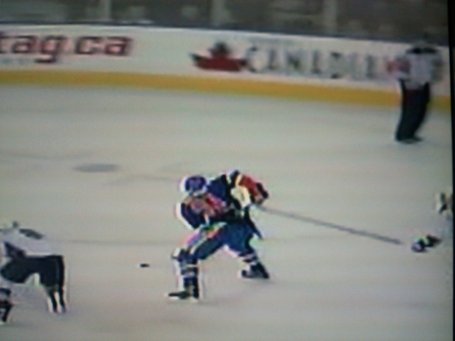 THIS IS A HOOK!