Tales From the Road: Detroit

Share All sharing options for: Tales From the Road: Detroit

Some of the cities on my list I dread, like Raleigh. Others, the idea of the city may scare me but the team itself makes me excited. One of those teams is of course the Detroit Red Wings. I knew going into this game, this experience, that the city of Detroit has been through a lot of hardship and for a long time. With the decline of the American automobile industry, any city in the rust belt has seen better days and in some cases is currently experiencing crippling economic depression. There were many parts of Detroit that made me extremely uncomfortable to see and be in. I was born and raised in Edmonton and various small towns in Alberta, I thought I knew about ups and downs. I mean we have agriculture and the oil and gas sector. I know nothing of ups and downs was the lesson I learned. Alberta has had brief periods (in the grand scheme of time) of economic downturn, but has always had the tools and the means to turn things around. The depressions and recessions of Alberta have been recoverable. Yes, some people lost their homes in the 80s, I will not dispute that, but when the economy turned around most of those people were able to find their feet again. Some parts of Detroit will not recover, ever as far as I can tell. I found that very sad. Especially since everyone I met or talked to at the game, at the Mowtown Museum (best $10 I spent my entire trip), the airport, and various other locations is so passionate and full of life and so positive. If only the results from the hockey game I was there to see had some of those qualities.

Walking up to the stairs at "the Joe" is truly something else. On my right was the city of Windsor, okay, across the water, but still. On my left, the Joe. People were lined up and waiting for the doors to open. With the amount of people waiting, I wondered why security opened the doors so late. I tend to get to these road games early, but I thought an hour before game time wasn't a stretch by any means. 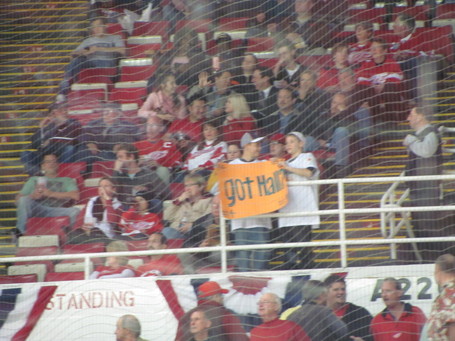 All around me were Red Wings jerseys of varying vintages, Oilers' jerseys and oh so many Windsor Spitfire jerseys. Ah yes, this was Taylor Hall's homecoming. How could I not have realized this? There were people with signs, many people with poppies and I definitely didn't feel like the lone Canadian in the crowd because in no way was I. I was very interested in seeing what would happen in an American arena on November 11th. I have been to games on Rememberance/Veteran's Day in Canadian arenas, but never southof the border. It was pretty much the same, a small tribute to Canadian and American soldiers and poppies on the coaches lapels for both teams. 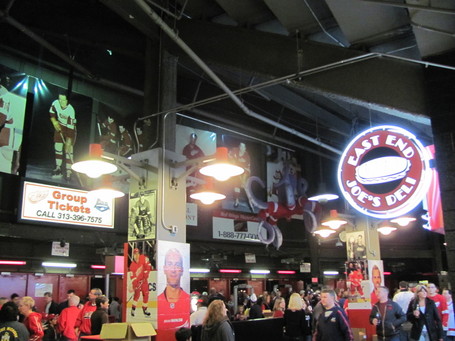 Walking into the Joe Louis Arena, I felt the pride and nostalgia hit me in surging waves with every corner I turned. All through the arena are photos of hockey greats and legends. This team has no shortage of history and it is proudly up on display for anyone to enjoy. The building itself seemed old and definitely not fancy; they don't need bells and whistles. To enter each section, you need to pass through some heavy vinyl/canvas barriers that hang from the ceiling. I had never seen this in another arena. I suppose this would help to deter people from moving about during play, and maybe to keep some of the sound from the concourse out of the seating area.  The other things that cannot be missed on a visit to the Joe is of course the Mr Hockey, Gordie Howe statue in the middle of the concourse near my section. How a boy from small town Saskatchewan can be so immortalized in an American Arena is truly astounding. No, I haven't been to the Booby Orr statue in Boston, but its funny just what can make you feel patriotic. 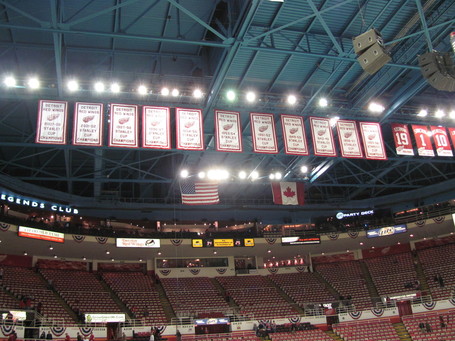 Once we got to our seats, the old school hockey feeling struck me once again. The seats were very old, the banners seem to take up the entire ceiling, the scoreboard is extremely old without a shot count. For that, you have to look to either one of the ends, and no one seems at all bothered by it. Sadly however, I knew that viewing the game itself wouldn't be so easy. The panes of glass around the ice are difficult to see through the scratches and the seemingly foggy appearance. The panes are connected with wide metal strips. Overall it was slightly disappointing. I won't lie to you, I look forward to these games in the States because this is a chance for me to get closer to the game at a much more affordable rate. I didn't feel very close to the game when I had to watch most of the game on the video screen at centre ice. No matter, I was really there, and of course this was not another pretty game for the Oilers, so I didn't mind not having to see absolutely everything that was happening right in front of me. 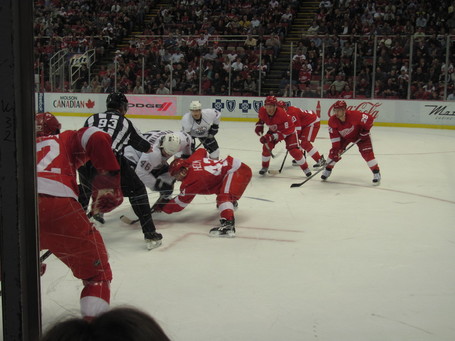 Now, if you think that the music played at Rexall is out of date, hahaha! You really need to go to a game in Detroit. The music would drive you crazy! Of course it wasn't that bad; I still enjoyed the game, very much. The best part, musically was late in the third period when the classic karaoke song by Journey, Don't Stop Believing started up. The play resumed at about "born and raised in south Detroit," which was the loudest singalong I have EVER heard in any arena, but the crowd kept singing. How often does that happen in an arena you frequent? The same thing happened a couple of days later when I went to my first NCAA hockey game. Michigan State was visited by Ohio State, the reaction to that song was much the same. 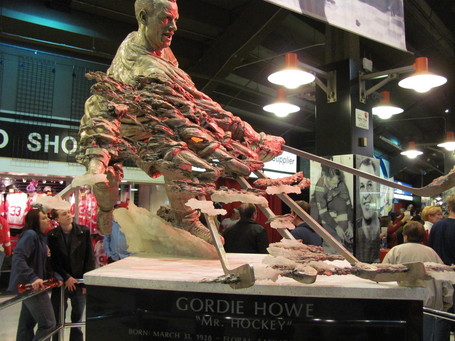 Hockey is alive and well in Detroit, and I think that the proximity to Canada really only helps with that. The fans are fantastic, the building is not my favourite for watching hockey in, well not in the lower bowl, or so close to the glass. I did love the Joe Louis for the scheer experience, and surprisingly enough would definitely put another trip to Detroit on my list.