20 Games In: Not The Same Team as Last Year

Share All sharing options for: 20 Games In: Not The Same Team as Last Year

Yesterday, I was asked how the Oilers looked compared to last year. I was quick to respond that last year started out a lot more positive. Of course the follow up question was "Exactly how much better though?" I thought it wouldn't hurt to have a look, and it didn't... until I really started looking at the numbers when they're right there in front of you. The two teams are different, and there are many players this year that we expect to have better results at the end of the season vs. now. But, this is still a team that will be battling for the basement with the New York Islanders. We all need to start hoping for Tavares to take a page out of Stamkos' book.

I've compiled the list of the first 20 games for this year and last. Right now, the Oilers are 5-11-4 while last year, they were 8-10-2. At first glance it doesn't seem that there is all that much difference between the 2 seasons, but have a look at the goals for and against comparison and how the lost games really look. True, a loss is still a loss but I think we know that a 5-0 loss feels different than a 4-3 loss in OT. Or remember the shootouts last year? That felt competitive. 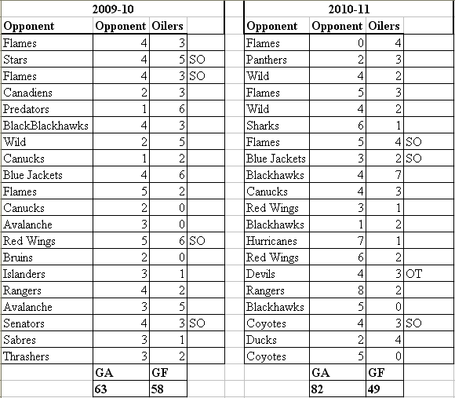 So there you have it folks. The schedule is fairly comparable, well to me at least. What really hurts is this:

Games Oilers were shut out: This year 2, Last year 3

I'm hoping that you will draw your own conclusions and opinions from these results. Maybe to you they mean nothing. Maybe it tells you, like its tells me, that this team is just that much more committed to a rebuild that much earlier. On paper, this team has more skill than the team last year but of course that too can be debated. Compete level doesn't always transfer from other levels to the NHL. Perhaps thats the moral of this story.

If you haven't heard yet, after the game last night coach Tom Renney really spoke out. "Its a joke. The battle level was non-existent tonight. The pride in the jersey was not even close to what it needed to be. It was an absolute joke, travesty." Will this fire up the players? I don't think so, but I do like that he wasn't calling out individual players, the loss was a team effort for the most part. It was refreshing to see some emotion from someone on the team, to see someone say that the compete level is definitely not where it should be. All I ask of my beloved Oilers is slightly more than last year. I want EXCITING last place hockey. The dive for five is just not the same without it.