Share All sharing options for: Oilers Overcome Referees And Ducks To Win 4-2

Once again, the story of the game was Devan Dubnyk.  Dubnyk faced forty shots on goal, only allowing two goals, and held the Oilers together through a couple of bombardments.  Dubnyk wasn't as steady tonight as he was against the Coyotes, but the Oilers left him exposed much more often and Dubnyk withstood the porous defense and numerous Anaheim chances.  Dubnyk's rebound control wasn't strong, though it wasn't bad like Khabibulin, and it seemed to me the Ducks were purposefully shooting the puck low off of his pads in an attempt to generate rebounds.  It worked to an extent - the pucks were there in front, but Dubnyk was able to freeze a number of them early and was in position to save the second chances late in the game.

After fending off the big first period from the Ducks, the Oilers were able to strike first as Sam Gagner was allowed to wander freely to the front of the net while the entire Ducks team was turned, gaze fixed on Ales Hemsky behind the net.  Gagner banged home the feed from Hemsky as the Ducks neither went to Hemsky, nor defended Gagner -- it was very similar to the problems the Oilers had against the Coyotes.  Less than two minutes later, Taylor Hall scored as Cam Fowler deflected Hall's wrist shot top shelf, far corner on Jonas Hiller.

Anaheim benefited from a terrible call (more on that later) and got one back on the power play as Bobby Ryan tipped home a Cam Fowler point shot.  Ryan deserved one as he hit the post twice tonight.  Saku Koivu tied it up 22 seconds later as Ryan Whitney and Tom Gilbert played a game of "no no, after you" defense in front.

The third period saw Edmonton come alive.  The chances were there, mostly generated by Edmonton's top two lines and Ales Hemsky got the game winner after bursting down the right side untouched (for a second time), getting a beautiful pass from Dustin Penner, then firing the puck up top at the Gatorade bottle.  Edmonton gave up a couple of rushes late, but they weren't really in danger to close the game.  If anything, they were still generating chances late, certainly more chances than Anaheim was able to put on Dubnyk.

Two Dubnyk starts in a row and two Dubnyk first stars (in my book).  At this rate, he might end the season as team MVP.

The Kingston Cannonball was absolutely maniacal with the puck tonight.  Taylor Hall's entire line was working well in spite of the Randy Carlyle matching Ryan Getzlaf's line against against the Comrade and the Wonder Twins.  The Ducks also sent out Cam Fowler and Andy Sutton to match the Horcoff line and 4-10-14 combination dominated play.  Hall had a number of high speed chances and got off a couple of rockets on goal, but it was his seeing-eye deflected wrister that beat Jonas Hiller.  There were also a number of times where Hall was swooping around the offensive zone without the puck, waiting for something to come free, causing panic on the part of the Ducks' defense.

With the Ducks choosing to use their top line against Horcoff's line, Saku Koivu, Jason Blake and Dan Sexton were forced to play against Sam Gagner's line all night.  Dustin Penner made them pay.  Penner's work along the boards was marvelous all night long and he was working the slot and crease more often than I've seen him do all season long.  He picked up two assists, the second on really nice rush in which he hesitated just as he entered the zone, drawing Tony Lydman to him, then left the puck for Ales Hemsky who hit the zone at full speed.  The best play of his night, in my estimation, was the faceoff win that preceded the rush up ice.  It was a full rugby scrum and Penner won the puck on his own twice before getting it to Tom Gilbert as the rush up ice started.  if not for Dubnyk's stellar play in the first period, Penner would easily be the first star of this one.

Shawn Belle was paired with Kurtis Foster and played a really low-event game.  Scott dinged him in the game thread for being tentative going after dumped pucks, but in general, he's playing a very careful game, chipping the puck out, chipping the puck in, taking the body and moving the man in front.  He's not been exposed positionally and he's not making bad decisions.  He ended with only fourteen minutes of ice time, but he was efficient in those minutes.

The Oilers team defense was something to behold.  They gave up nineteen shots in the first period, thirteen more in the second and there were quality chances throughout  the first two.  The Ducks were alone in front a number of times for one-on-none shots and spent the entire game tipping pucks without challenge towards Dubnyk.  If not for the MVP, this game would have looked like the Khabibulin road trip.  They turned it around in the third period, but twenty minutes of commitment to the zone is not enough.

The Oilers new-fangled fourth line was, as Bruce put it, "Zorgless".  Without him, there just wasn't much battle in J.F. Jacques, Colin Fraser and Magnus Paajarvi.  Almost all of their five minutes came against the Ducks' fourth line of Aaron Voros, Todd Marchant and Ryan Carter and twice, the Ducks hemmed the Oilers in for an extended period.  In the pregame, a couple of sources referred to Paajarvi playing his "off wing" as he lined up on the right side, but as per Johan, Paajarvi is a natural right winger who has been playing left wing this season.  It might make more sense to send Paajarvi to Oklahoma City and allow him to play right wing for the rest of the season.  It might make more sense to send J.F. Jacques to the press box for the rest of the season.

Jim Matheson tweeted that the Oilers had scratched Steve MacIntyre and was concerned that J.F. Jacques would have to do the "heavy lifting" against the Ducks.  I know people of all walks are comforted by hired knuckles in the lineup, but I still don't understand it.  Hired knuckles fight only other hired knuckles.  They lumber around the ice, rarely touching the puck in their five minutes of ice time.  They don't jump on the ice and fight dirty players or protect anyone.  If you believe that protecting your team through fighting is important, wouldn't someone like Theo Peckham or Milan Lucic mean much more to a team than a set of hired knuckles?  Those guys are actually on the ice for large period of time and can actually jump on a dirty player and pummel him for a cheap shot.

Man, this is some BULLSHIT!

--Patient in Rehab, "Half Baked"

I'd like to thank the referees for completely and so openly screwing the Oilers in this one.  In the second period, with the Oilers leading 2-0, Theo Peckham cleared one off of the glass and it should have left the zone.  In a weird twist, it went through this: 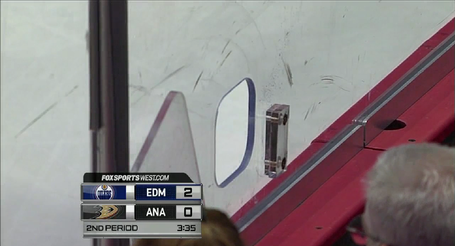 So rather than a faceoff in the Edmonton zone, where it should be by rule, Stephen Walkom whistles Peckham for a delay of game. 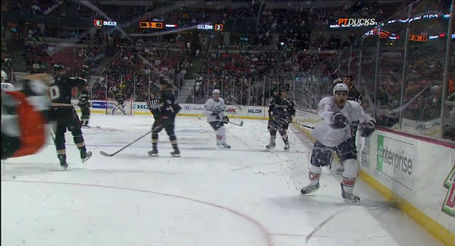 Look how far away Walkom is from the play when he makes the call.  He was no more than twelve feet away and missed it.  No matter, you say, he can just confer with the other ref and linesmen and make the correct call, right?  Sure, he held court with... 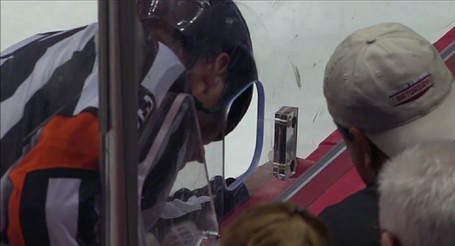 THE PHOTOGRAPHER?!  Are you kidding me?  Way to go stripes, nice work.

This is why the NHL needs some sort of instant replay override.  When the referee can stand twelve feet away from a play and blow an obvious call, there are problems with the officiating.  Someone, somewhere should be able to overrule the ref and make things right on the ice.