Save Percentage on the PK Since the Lockout

Share All sharing options for: Save Percentage on the PK Since the Lockout

I've spoken in the past about save percentage on the penalty kill being a pretty volatile measurement of performance.  Because in any given season there really aren't all that many shots on the PK, a lot of times goaltenders can put up a fantastic number over what seems like a long period of time (like half a season, or a full season), only to see their performance regress significantly.  Oiler fans will recall the season Mathieu Garon's performance in 2007-08 as a prime example.  That season, he had a magnificent save percentage of .908 while the Oilers were penalty killing.  The next season?  .828.  That difference is extreme, but the general principle (a decline in performance after an outstanding season) is typical.

So when I look at this year's leaders and see that Michal Neuvirth has a PK save percentage of .911, an EV save percentage slightly below average (.916), and a professional track record that doesn't exactly suggest a fantastic netminder, I'm inclined to think that his performance while shorthanded will regress significantly as the year goes on.  But that's not to say that stopping shots while killing penalties is all luck.  In the case of Neuvirth, we don't have much data, but what about a guy like Jonas Hiller who has a save percentage of .885?  It's still well above average, but it's not outlandish?  Should we expect him to regress?  In an attempt to help in answering that question, I've put together the PK save percentages for every goalie who has faced at least 1,000 shots since the lockout.

The upcoming chart is pretty self-explanatory.  I've included every goalie who's faced at least 1,000 shots from 2005-06 through what's been completed in 2010-11.  I also decided to use data from both the regular season and playoffs, which should increase our sample at least a little bit, and besides, the playoffs are important.  I've also included each goaltender's best and worst season (min. 100 shots) to give a sense of the volatility from year to year: 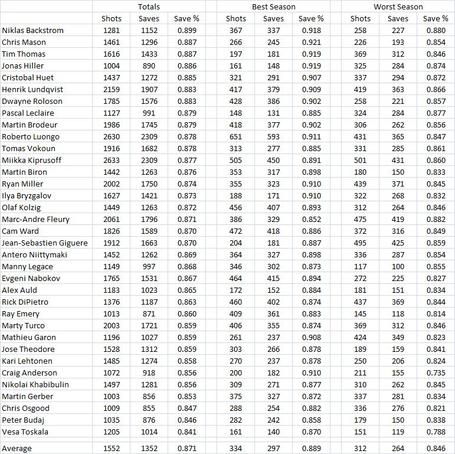 As you can see, there really is a tremendous amount of volatility here.  There's a substantial spread from best season to worst season, and some goalies who have put up amazing years have also put up a stinker (Craig Anderson, and Mathieu Garon come to mind in this category).  But some goalies seem to just be very good in short-handed situations.  In fact, most of the "regulars" tend to be better.  The average on the PK over the last several years has been about .866, so seeing the group that gets the most playing time outperforming shouldn't be surprising, but it does support the idea that these goalies are in fact showing some skill.  Going back to Hiller, the .885 he's put up so far this season is right in line with what he's done since coming to the NHL, so I'd be inclined to expect that level of performance to continue.

But the real star here is Niklas Backstrom, whose numbers are amazing.  I know some will discount those because of where he's played (and last season, his first without Jacques Lemaire, was his worst), but the guy is twelve points clear of the field at this point, which is an awful lot of ground to give to coaching (especially since Martin Brodeur had his worst season last year with Lemaire).

As for the Oilers, there's bad news and more bad news.  Nikolai Khabibulin has been one of the worst goalies on the PK over the last several years, so even though he's bound to improve on the .750 save percentage he's posted so far this season (if he's ever healthy enough to play), he's not likely to provide average netminding going forward.  Unfortunately, the recently recalled Martin Gerber is one of the few men on this list who's actually worse.  It's not like we should have been expecting anything great from the old Swiss, but it's a bit disappointing that average would likely be too much to ask.  And more bad news?  Tom Renney is probably being so stubborn about this diamond penalty kill formation because it worked so well for him in New York.  Now, in fairness, it really did seem to work there, and likely would have been in the top half of the league even if Henrik Lundqvist wasn't stopping pucks at a higher rate than almost everyone else in the league.