The Standings After Fifteen Games

Share All sharing options for: The Standings After Fifteen Games

Every year there are teams that slump through the first fifteen games of the season and there others that jump out to fantastic records.  Sometimes, as in the case of this year's Oilers, this is no surprise and everyone expects the "performance" to continue.  Other times, as in the case of this year's Devils or Blackhawks, the slow start comes as a surprise and many observers are reluctant to believe that their strong record will really be that bad all year long.  Following up on an article I wrote last season, I decided to take a look at the first fifteen games for every team since the lockout in order to see how much their record changes from the first fifteen games to the end of the season.  If nothing else, it should give fans a reasonable range of expectations for their team based on their record so far.

Looking at every season since the lockout gives us 150 completed seasons.  A lot of those seasons saw big swings in terms of overall points percentage, so it's not like a team's position in the standings after fifteen games determined their position after eighty-two games.  Nevertheless, the data does offer some good guidelines for managing expectations and letting fans know whether they should be cheering for wins or losses (that one's for you Bruce):

As you can see, if your team has 22 or more points at this stage, they're a near lock to make the playoffs.  There's the odd exception mixed in, but even then, it's been bad luck in terms of the number of points required to make the post-season - 93 is almost always good enough.  In fact, even if the team is poor and their record over the last 67 games earns them a points percentage of 50%, they'd still have 89 points and a shot at the playoffs.  In reality, any teams that have earned 19 points are probably pretty good.  There haven't been any lottery seasons in that bunch, and in fact, the low end is the playoff bubble.  But after that, things start to get a bit wobbly.  Teams that earn between 13 and 18 points in the season's first fifteen games are usually your playoff bubble teams, with a few elite clubs and a few real stinkers - in other words, the first fifteen games haven't told us much.  But once a team hits that 12-point barrier, they've been pretty universally bad.  They never get enough points to be confidently in the playoff mix, and on average, aren't anywhere close.  If your team has twelve points or less, it's time to start cheering for losses.

So what about this year's standings?  Here's what the Western teams have done after fifteen games: 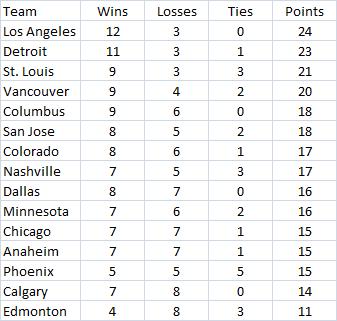 The Kings and Red Wings have both done well enough that we can say with confidence they'll be in the playoffs at the end of the year.  I'm not particularly surprised by the success of either team, and will definitely stand by my prediction of both teams as division winners.  The Canucks and Blues are also in the "solid" category, and I'm once again not surprised.  I expected both teams to be solid playoff clubs to start the year, and that's exactly how they're trending.  Everyone else (except the Oilers) is still in the mix after fifteen games, and the mediocre start hasn't told us much about where they'll finish.  Chicago, for instance, was only marginally better after fifteen games last season (8-6-1), so their early season struggles might just be a blip on the radar.  That said, seeing them tied for tenth overall is a good reminder that they haven't been on the right side of the playoff line for quite a while.  The official standings obscure that because Chicago has played so many games early on, but that will certainly need to get things turned around quickly.  And the Oilers?  Sorry, Edmonton - it's time to cheer for losses already.  I say we get our french on and go with "S'injurier pour Couturier", which might be loosely translated as "Mock yourselves for Couturier" (or maybe, if I give myself some license, "Make a mockery of yourselves for Couturier").

So what about the East? 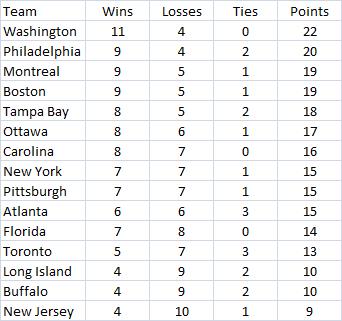 Washington, again unsurprisingly, is among the elite squads.  Philadelphia, Montreal, and Boston have shown enough that we can be sure that they'll be in the playoff mix this year, and there are three clubs you should probably be looking to lose.  Long Island isn't a surprise, but both Buffalo and New Jersey are.  I had both teams in the playoffs, and New Jersey actually winning their division.  I'm sure the management of both teams felt the same way.  Now, the Devils are still struggling, so the plan has no doubt shifted from the perspective of management (TANK!), who will likely try to fix it over the summer a la Philadelphia circa 2006-07 and 2007-08.  The Sabres, however are a different story.  They've turned things around a bit and are playing in a conference where, after fifteen games, the eighth place team was on pace for only 82 points.  Will the Sabres do the (near-)impossible and claim a playoff spot after a truly horrendous start?  I don't know, but it sure will be interesting to see what Darcy Regier does if his team is five or six points of the playoffs come February.