Tales From the Road: Raleigh

Share All sharing options for: Tales From the Road: Raleigh

I think that I am at least a tiny bit excited for a trip to every arena in the NHL, with the exception of this one. When the Oilers lost in the Stanley cup finals before 2006, I didn't know what hockey was but I think we all remember 2006 a little too well. I wasn't  eager to make it to the place where it all happened and I worried how I would be received once I arrived. Now, I don't think I'm alone in thinking that most southerners don't like hockey, don't watch hockey let alone know what it is. Imagine my surprise on my flight from Chicago to Raleigh and I was sitting next to a true southern gentleman, and a hockey fan. This older gentleman is a district judge who sees the decline of many of the southern states both in economic and social terms. The judge said he saw the economy leading to the social problems and even supported many of the tax and social programs that Canada has. This surprised me. He then shocked me when he started asking me about NHL and hockey in general. I told him that I was travelling to Raleigh to catch a game, he was a little surprised but then started asking me to explain icing to him. Apparently there is a strong hockey following, even if it is small. This was starting to sound like the situation in Florida.

Hockey recognition followed me even to the rental car depot. While waiting to get my car, a couple of men from Mississippi in front of me noticed my Oilers luggage tag. I have to stop being so surprised when things like that happen. Anyways I laughed when one of them said he was surprised that more southerners didn't follow hockey. "You take angry red necks, give them beer and a stick what's not to love?" the first fellow said. The second adds, "You just have to watch out when they want to BBQ things."

OK, so I'm sure you've heard about southerners and their tailgating. I really didn't think that they would do it before hockey games, let alone hockey games on Tuesday nights. Well, they do, even on Tuesdays. Parking at the arena and the police presence directing traffic made me very jealous. If you've ever tried to park in the Rexall lot, or near it you know how interesting it gets after the game when you try to leave. It takes forever. Traffic easily flowed into the HUGE parking lot, and just as easily out. I do agree that there are more people in attendance at Oilers games, but you can also take the LRT to get to Rexall, not so with the RBC centre. 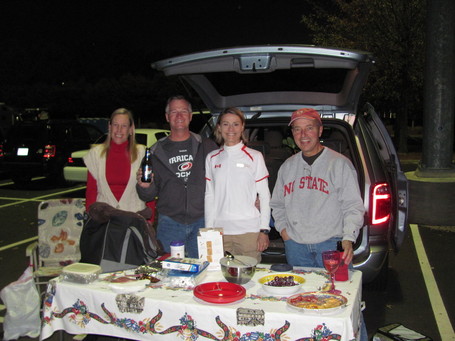 Inside RBC, this is where I started to get a little more jealous of these southerners. The concourses were so wide, everything looked new and sparkly, and I started to feel more at peace the more Hartford Whalers items I saw. People still wear t-shirts, hats and even jackets with both the Hurricanes and Whalers logos. I don't know why, but this convinced me a little more that my sport of choice might be the same for some of these fine folks. 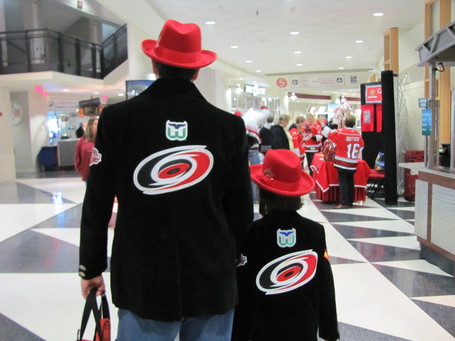 The game itself, well, it was just last week, November 9, 2010. You know the pain I had to have been feeling. I love the Oilers, I love watching them play, but it was hard watching them struggle against an OK Carolina Hurricanes team. Dustin Dustin Penner got the lone goal, Andrew Cogliano was the victim of a high stick and a subsequent missed call. My seat was the first row behind the Oilers bench, and my stomach churned looking at poor Cogs and his split and very fat lip. The cool part about sitting right behind the players was seeing the referees come and talk to coach Tom Renney at the beginning of the second period about the missed call, and actually apologize to Cogs for missing it. The other awesome part about sitting so close? Watching Smid's reaction at the end of each shift. That man is passionate! If the Canes scored while he was out there, which of course happened, you didn't have to be a talented lip reader like me, to know exactly what he was saying and how he felt about it. 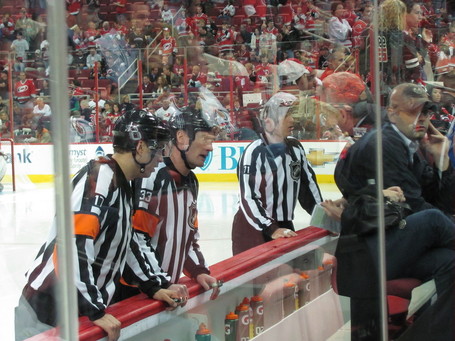 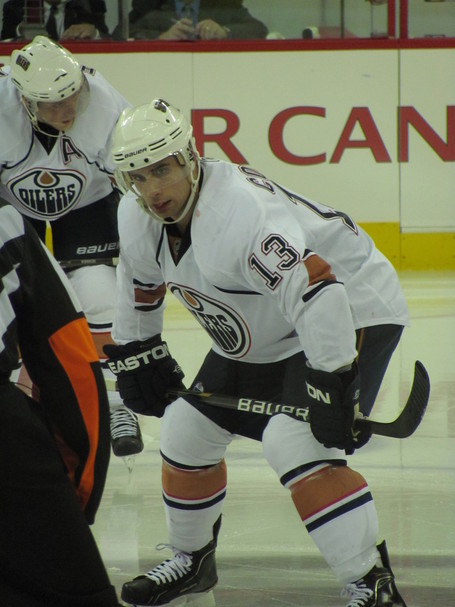 So, how about those cheer squad ladies in Carolina? They were public in saying that they think the Oilers should have a cheer squad, and that they feel they do a lot of good for the team in the Raleigh area. Let me tell you, those girls are FREEZING! You see many of them wears gloves. They wear long sleeved shirts and long pants and I didn't see them on the ice at all. They stood at the corners and sat on metal gates when music would play between whistles or on commercial breaks. I can't even say that they danced. I was looking for them to see what their role was, so I can't imagine that many fans would see them on a regular basis. I did ask the season ticket holders near me what they thought of the cheer squad, not a single one said that they thought it was needed or pracitcal. They were shocked that the Oilers were going forward with this idea. The other thing that shocked these fans, that everyone who clears the ice in Edmonton doesn't wear a helmet, and that they wear skates. That's right, they wear helmets and sneakers in Raleigh, safety first! 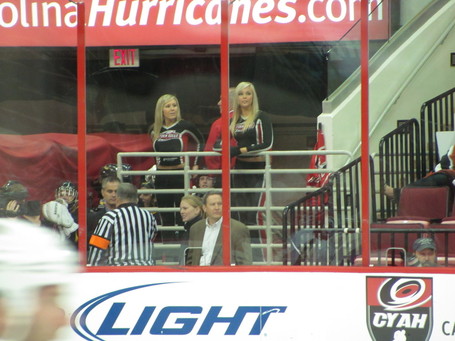 Otherwise, I have to say that many of the fans in Raleigh were amazing. I met a handful of Oilers fans at the game. Some were true southerners with their thick accents who told me that they were Oilers fans for longer than I've been alive. A few were in town for work, and this game just happened to work out for them perfectly. No matter what their reason, it was comforting to see so many friendly faces and familiar jerseys in the stands, especially with the seemingly continuous stream of '06 playoff run clips. They were continually reminding fans that this was the team the Hurricanes had beat to win the Stanley Cup. This hit where it hurt, it was hard to hear and watch, and then watch our team struggle on the ice. I think I'm a stronger person now that I can say I made it through that game, in that arena. 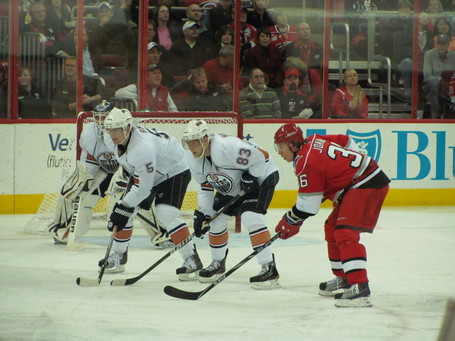 The other thing that I found interesting about the RBC centre, is how big of a presence John Deer has. There are riding mowers in the entrances (after you pass through the metal detectors and high security) and before you hit the BBQ vendors. Then, their zambonis are also sponsored by John Deer, and they are painted up to look like John Deer combines. I figured this was to make people feel more comfortable and at home in the arena, give them something sorta familiar amongst the strange. I really should stop kidding about the southerners not recognizing hockey. There were people around me that had never been to a game before that night, but more people had played hockey, or still play hockey and are just trying to get enjoyment from the game just like me. So, my conclusion from this experience is that there are hockey fans in North Carolina, but not nearly as many as in Edmonton, but a fair number. I can't say that I think that hockey in the southern states will ultimately be a long lasting success, but its good to see displaced Canadians and hockey fans in general with a team to cheer for. 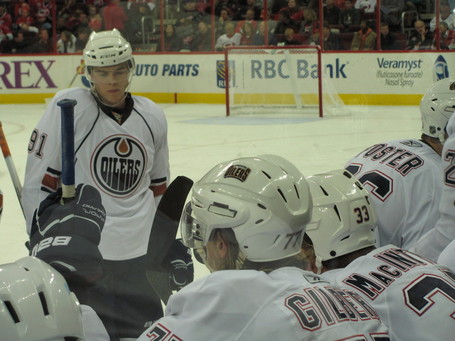 I can't say that I would plan another trip out to the Raleigh Durham area, as beautiful and friendly as it is. It was a very painful place to be as an Oiler fan. You never know though, it could happen again. To my beloved Oilers, I'm sill in your corner and cheering you through this rebuild. I was expecting the loss, but I would have liked a few more goals. No matter though, the youngsters are getting more NHL time and experience, Khabibulin is getting more opportunities to test out his back, Renney is able to experiment with more line combinations, and Tambellini is given a chance to see where the the Oilers need the most improvement. I have skipped a few road experiences, we'll look at those at some point. Next, I'll share my Joe Louis experience. 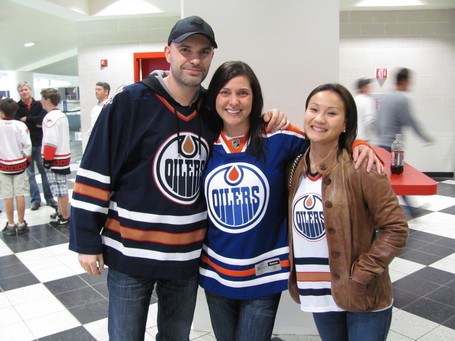