The Touches Stat - The Next Horizon In Advanced Stats

Share All sharing options for: The Touches Stat - The Next Horizon In Advanced Stats

The evolution of advanced NHL statistics begins sometime during the Original Six era.  The building blocks of advanced statistics have been gleaned from interviews, books and conversations with men like Harry Sinden, Roger Nielson and Jim Corsi.  Sinden's Bruins were tracking an ancestral version of Corsi as early as the 1960s.  Nielson was tracking scoring chances in the 1970s and far more data in the 1980s.  Corsi himself has been tracking shots data since he began coaching for the Sabres.

From that base, some very intelligent men have turned the concepts and ideas from those NHL innovators into analytical tools of enormous value.   Vic Ferrari presented Corsi for public consumption and Gabe Desjardins began tracking it.  Desjardins created qualcomp and qualteam from the NHL scoresheets.  Ferrari taught everyone about Roger Neilson's tracking innovations, including scoring chances, and created zonestart, zonefinish and zoneshift as a way to understand the men assigned to do the hard work.  Vic showed us that Corsi was closely correlated with the long-gone zone time.  Matt Fenwick tweaked Corsi by removing blocks and created Fenwick, which tracks very closely with scoring chances.  JLikens adjusted Corsi for a number of situations, expanding our understanding of zonestarts, score effects and possession.  These men have made an enormous amount of progress in a very short time and have evolved to allow fans a much deeper understanding of the game for whose who care to look.

A common refrain among critics of stat-based hockey analysis is that hockey is a game of movement and can never be reduced to granular statistics like baseball has been by Bill James and Sabermetrics.  Some of these statistics have have been in use in the league for over forty years, longer than Bill James has been crunching Major League Baseball's numbers.  Those critics claim too many outside influences impact each game and stats don't account for things like heart, chemistry, hustle and will.  These perceived limitations haven't stopped NHL teams from collecting and using advanced statistics and detailed stats beyond even those currently in use.

The data collected by NHL teams doesn't stop at shots, faceoffs and scoring chances.  Teams are tracking more, much more detailed data than the average fan can imagine.  An off-handed conversation about hockey stats and some follow up investigation revealed one of those advanced statistics - touches.  Scott has occasionally looked at touches as a way of testing suppositions about certain Oilers, but the authors here have never considered touches as a statistic of interest to coaches or management.  We've always assumed touches to be something interesting only to the nerdiest of the statheads.  We were wrong.

In talking to contacts at nine different teams and programs throughout North America, we discovered two CHL teams, two NCAA teams, one professional team and one NHL team are currently tracking touches on a game-by-game basis and all of them use the information throughout the season to gauge player effectiveness.  Though the sample size is small, the number of teams tracking this information is a signal that others are likely doing this as well.

Most teams track this information by period, but some go for even more detail - they track them at the shift level, noting both teammates and opponents.  We were able to get a detailed explanation about the tracking methods from two of those teams and below are author's renderings of two touches sheets currently in use.

The first sheet, currently in use by one CHL team and one NCAA team, breaks down like this example using the Oilers roster: 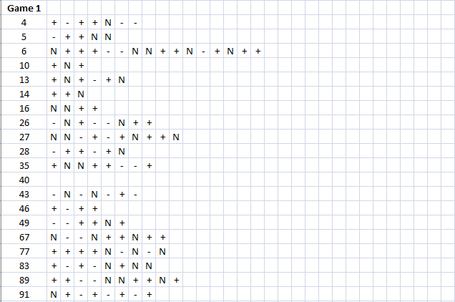 The staffer responsible for tracking touches notes a positive, neutral or negative rating for each touch for each player throughout the game.  The NCAA team that uses this system tracks the touches by period.  The coach is supplied with touches information on a regular basis during the game.

The second sheet is used by another NCAA team and an NHL team.  Again, an Oilers roster has been used as an example. 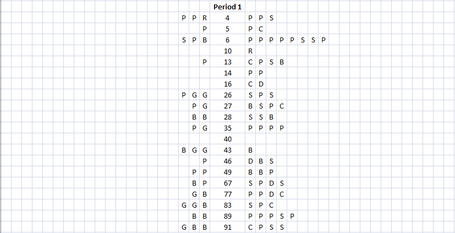 Each touch is assigned an abbreviation, and scored with a positive value to the right or a negative value to the left.  There are no neutral touches assigned.  In my example, B = puck battle, C = clearing attempt, D = dump in, G = give away, P = pass, S = shot.  The actual stats are broken into more categories than the example sheet, but from what we understand, these are very good examples of the information tracked on these sheets.  This information is updated by shift and after the game is cross-referenced with shift chart and faceoff information taken by other staffers.

The next great leap in the evolution of advanced statistics analysis will come from the thinker and likely blogger that takes what we know of touches tracking and implements a common framework, much like those participating in the scoring chance project have, bringing the touches data currently being collected by teams at all levels to the public for consumption and analysis.  As it is, the average fan's head spins when exposed to a discussion on relative Corsi or zonestart.  In a very short order, the topics of conversation will be battle percentage and total touches.

It must be a mountain of data to digest.  The advanced statistics crew has some catching up to do.